Playing with other people’s money

Pushback by Atlantic City’s police and firefighter unions will likely be the single biggest impediment to the financial rescue of the city. The unions cannot – must not – be allowed to win this fight. And the only questions are: How long will the battle take and how ugly will it get? (Perskie/for PolitickerNJ)

When the presidential buzz began building around Sen. Rand Paul (R-Ky.) a couple of years ago, the expectation was that his libertarian ideas could make him the most unusual and intriguing voice among the major contenders in the 2016 field. (Tumulty. Costa/The Washington Post)

Bilik looks to develop her own niche with Assembly bid

This article was produced in collaboration with Next City.

In New Jersey’s State of the State address this January, Gov. Chris Christie — an unannounced presidential candidate who’s been focused on getting the nation’s top political job for more than a year now — laid out what he now sees as his major accomplishments in office. Overcoming partisan politics, his administration succeeded in “growing our economy, creating jobs, reforming our criminal justice system, and improving some of our most challenged cities,” Christie said. (Philadelphia Inquirer)

AAA Mid-Atlantic says the average price of a gallon of regular gas in the state on Friday was $2.16, down a penny from last week. That’s also much lower than the price from a year ago, when motorists were paying $3.38.

This marks the fourth straight week that pump prices have fallen in New Jersey. (Houston Chronicle)

Low humidity and gusty winds could spread brush fires quickly, prompting the weather service to issue a hazardous weather outlook throughout the region.

A small brush fire erupted in Millstone Sunday morning after a homeowner who was burning logs in a backyard lost control of the flames, said State Police. The fire was quickly extinguished, troopers said. (Oglesby/Asbury Park Press)

And so it goes … in New Jersey

The federal government claims he accepted more than $1 million in gifts and campaign contributions from a Florida ophthalmologist, Dr. Salomon Melgen, in exchange for political favors. (Bucks County Courier Times) 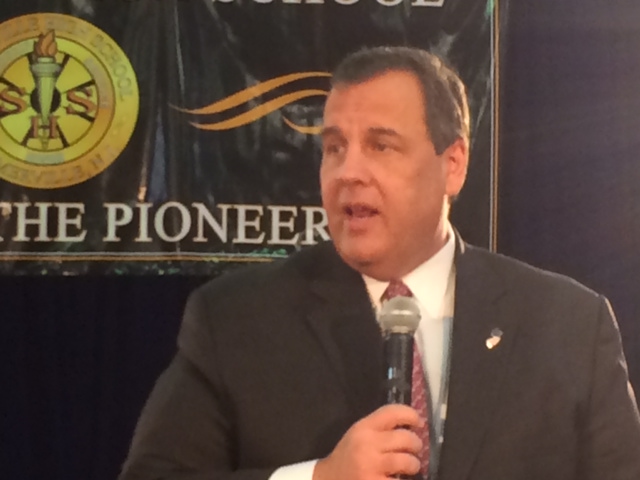