It’s been awhile since we were last in Nashville and as is often the case post-hiatus, it takes me a few beats to get back into the swing of things. So, okay – where we at? Let’s go through our couples, shall we? Goddamn this show has a lot of storylines.

Rayna/ Deacon – I think Deacon is spilling some serious truth when he tells Rayna that for once in their relationship, he wants to have a lil bit of agency. When he goes through all the decisions Rayna’s made without him–marrying Teddy, hiding Maddie’s paternity, choosing Luke—I was like, ‘sing it Deacon!’ But Rayna’s decided they’re in this together now and when Ray decides what she wants, she wants it now! She demands to know why Deacon “can’t be the man she always knew he could be, with her by his side.” She passively aggressively questions, “Do you not believe in us enough?” Deacon, a man who has been rejected by this woman about a thousand times, and is now dying of cancer, wants to take, like, five seconds to think about it. Does he believe in “them”? I have to say, if I were Deacon, I wouldn’t be so sure. Rayna has told him to move on from their love repeatedly, and mere weeks ago to boot! I realize now that he’s dying, Ray thinks she’s all in, but can’t she give him at least a minute to figure out if he is too before she declares her heart broken and stomps off like a toddler? No. Because then she wouldn’t be Rayna. I can never tell if the Nashville writers know how selfish they write Rayna or if they love her in the same hang dog way Deacon does. Because by the end of the episode these two are back together in post-coital, naked flannel blanket bliss and Rayna coos, “I love it when I’m right.”

Quick question: If Ray loves him as much as she claims, why did she not offer him a liver? Question for next week possibly? I bet you Maddie would jump at the chance to give Papa a liver. But will Rayna allow it?

Luke/Sadie – Some real sexual tension between these two and I actually think they make a pretty cute couple. Sadie is clearly into Luke but feels loyalty to Rayna, so isn’t going to push it. But you know what trumps label head loyalty? The love/loyalty you feel to the person who finds you seconds after you kill your ex-husband. Get ready ya’ll, I think this is just the beginning of Suke.

Layla/Jeff – Not much new here. Jeff is still a sociopath, Layla’s still an idiot. By the end of the episode Layla decides it’s time to stop pining after men who can’t love her – be it based on their sexual orientation or their hooved feet. She fires Jeff as boyfriend but is keeping him on as manager. Because, that’s right Layla, he can’t inflict any tortures on you from that position. Get this girl to an Al-Anon meeting stat, because I would bet the farm one someone in her immediate family is an alcoholic.

Teddy/Hooker – Teddy’s hooker wants to be bought off. Teddy don’t have the cash. Teddy begins his slow transformation into Lamar.

Will/Gay Country Song Writer – GCSW uses his superb GCSW gaydar to infer that Will is in the closet. GCSW is out and proud and don’t want none of that mess. Will hints to GCSW that he might be gay. GCSW is like, ‘no shit Sherlock’. We continue in the Nashville tradition of always talking about Will’s sexuality and never talking about it.

Avery/Facetime – There is nothing Nashville likes more than huge, schizophrenic character swings. Last month’s attention seeking, remote-losing Juliette has been replaced by a beautiful, serene “have fun on tour with Rascal Flatts and your ex-girlfriend, don’t worry about me, I’m only three weeks from my due-date” Juliette. No wonder Avery was nervously checking-in every five seconds. He was probably worried a pod person had replaced his wife. Don’t get me wrong, I loved this Zen mama-to-be in matching pajamas. Nursing a giant’s baby clearly agrees with Hayden Panettiere because she has never looked more beautiful, but I really hope this is the last week that Juliette is pushed to the sides of an episode

Scarlett/Twitter – The Triple Exes are on tour with Rascal Flats and holy shiz – their first stop is the exact same arena where Scarlett had that meltdown a year ago. What are the chances? Gunner wants XXX to start tweeting to develop a fan base but the internet don’t quickly forget a public meltdown and the Scarlett haterade is a flying. And of course, of course, Scarlett is the kind of person who would engage with her unknown twitter followers to try and change their minds. It’s so like her to think that she could explain what really happened in 180 characters and then expect everyone to love her.

Despite some great musical numbers, all in all I thought this was just an okay episode. The only time that got me truly teary was when Deacon told Maddie about his cancer. Yes, this was done sans dialogue over Avery’s beautiful, emotionally manipulative lullaby for his daughter. And yes, I think the way Rayna and Deacon told Maddie and Daphne they were back together was pretty weak. (Walking in holding hands? Really? Also, poor Daphne, does anyone care how she feels about anything? How many new fathers does this girl have to love?) But, seeing Maddie collapse into tears as she found out was just really heartbreaking. Maddie just loves Deacon SO MUCH. Nashville got me here, I really felt it.

Also, can we all agree to vote here to make sure the Javery baby isn’t named Cadence? Barf. 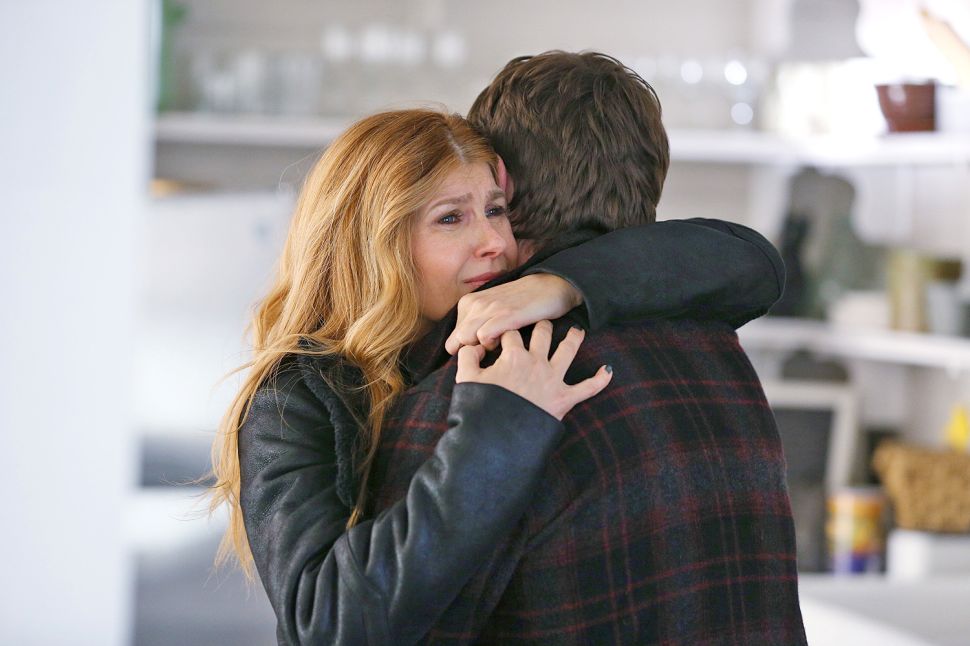