Recently, there’s been a lot of critically important talk about the convergence of sexism and violence in the videogaming world. For those of us whose brains need a break from attempting to break down barriers of sexism, privilege, and other systemic cultural dangers, I offer this:

A video game in a language you may not speak, in which you look at cats that come and go every now and then from your imaginary backyard. Pretty much nothing else happens.

I try not to get too many of my recreational ideas from Vice, but when I read about Neko Atsume (loosely, “Gather the Cat”), the sim kitty craze that’s brought international productivity to a near-complete slowdown, I knew I had to download it. Well, I knew that I first had to figure out how to copy its Kanji name into the App Store, then try to download it. It looked simple enough, even if I couldn’t read any of the rules: buy some stuff with sardine currency and then watch little multicolored cats show up and play with the stuff, then leave. Then watch other cats come. Later.

Ahhhhhh. How simple and relaxing. Unlike real life.

Except, wait. For some time now, and since last summer in earnest, hadn’t my own real life also been about watching multicolored cats show up in the yard, then leave, then come back again later? Hadn’t I, in fact, named two of the most “regular” stray visitors in my actual Brooklyn backyard? Hadn’t I, even, bought some discount storage bins, busted up some old Omaha Steaks shipping containers for insulation, and asked nicely at the local hardware store if I could have some leftover bales of decorative straw for my multicolored, real-life, non-animated visitors to have warm winter shelters? Hadn’t I even taken a trap-neuter-return training class offered by the NYC Feral Cat Initiative, in order to make sure my favorite patio chair freeloaders weren’t going to deliver me spring kittens, and then driven a depressed, caged cat to Glendale, Queens, at 7am on a Saturday, only to find out he was already neutered? And now that spring was here, hadn’t I only JUST broken the habit of looking outside the kitchen window to see if they were safely in their shelters every 30 minutes while I was trying to work at my computer? Ok. I had. All of it. Guilty as charged.

But did I REALLY just download a video game to emulate the same questionable interest that visibly worried my husband for months? But wait, it makes sense.

Though cat lovers are all a bit irrational—remember, cats are not animals that freely dispense affection, or, in the case of Neko Atsume, gold sardine currency and small trinkets—they’re all on basically the same page. Cats, at least when they are not shredding your LP spines or urinating on your shoes, are calming to be around. To look at. To think about. They’re a safe, soft place for a weary mind to rest, and it turns out that the suggestion of this soothing, life-must-be-so-much-simpler-for-you animal works even when it’s suggested in childishly rustic cartoon form on your telephone screen.

As one Neko Atsume blogger, Kuroo, translates, the game’s self-defined focus is just this:

“The cats that gather in our backyard,
just looking at them is comforting.
It is basically that kind of app.”

And slowly I noticed, and by slowly I mean quickly, because I have only been playing this thing for four days now, that my blending of real world cat-looking-comfort-seeking and virtual cat-looking-comfort-seeking was becoming confusing. Friday night I stayed upstairs playing the game—replenishing cans of cartoon tuna or trays of imaginary sashimi, setting out fake fluffy cushions—well past my real-life, inside-the-house cats’ dinnertimes, starving them within twenty minutes of ravaging my napping husband’s bones for sustenance. In the middle of the night, waking to go to the bathroom, I wondered whether I should turn on the iPad and make sure the Neko Atsume cat food bowls were full, so that more cats could come and go while I slept and bring me more sardine currency. I showed everyone at a Brooklyn bar my cat video game on Saturday. I sent screen captures of cool stuff happening in the game—like the time the “rare” baseball-playing cat came to visit the yard—to a good friend I’d also dragged down with me. Of course, she was only so impressed, having already spent several of her real-world dollars (the game is free, but offers an in-app purchase of extra sardines) to expand her backyard into a full on indoor-outdoor cat freaking paradise.

And this morning, in between working on freelance pieces and pretending I was going to go to the gym, I regularly checked on Neko Atsume. (It is possible I have it installed on multiple devices.) On a laundry break, that is to say a break from both work and Neko Atsume, I took a blanket outside to hang out to dry in the sun. I noticed I’d accidentally dragged along a small dryer ball: a spiky plastic porcupine meant to help jostle your clothing in the dryer. I stared at the small spiky plastic dryer porcupine on the patio stones at my feet. “I could bring that in,” I thought. “Or I could leave it out for the backyard cats and see if it attracts any cats to play with it.”

I saw one of the outdoor cats later, by the way. She didn’t leave me any gold sardines. Then she went away again. 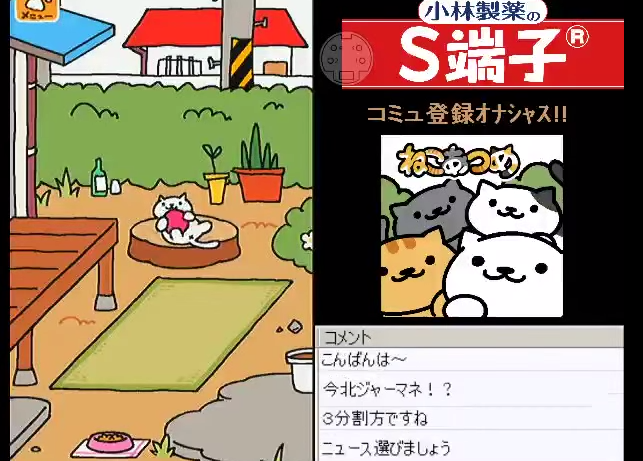