New York businesses have two disabled icons to choose from, and that is one too many. Currently the Empire State is the only one in the country that requires businesses to display a new “Accessible Icon” as oppose to the 50-year-old International Symbol of Access (ISA) specified in the American with Disabilities Act (ADA). The new regulation, which requires that businesses in New York use the Accessible Icon when performing construction and alterations as of November 22 of last year, has provided a quandary for business owners all over the state.

“They must either display the Accessible Icon and risk violating the ADA, or display the ISA instead and fail to comply with state law,” attorney John Egan wrote in a statement.

Mr. Egan, a Senior Associate at Seyfarth Shaw, specializes in disability law and its impact on employers and public accommodations. Mr. Egan is unaware of any current litigation in New York regarding the issue, although believes that until the ADA formally approves the new icon, businesses will be hesitant to make a change.

“This has created uncertainty in the business environment,” Mr. Egan told Observer. “New York businesses can potentially display both symbols, although this option would duplicate effort, increase cost and might cause some confusion among patrons.”

On top of eliminating the use of the word “handicapped” on all accessibility signs, the new state regulation intends to provide an updated and more active design to the disabled icon. As oppose to the traditional “static” image, the new sigil, according to the Accessible Icon Project, depicts a “dynamic character leaning forward with a sense of movement.” The new icon clearly differs from the classic design, but, according to Mr. Egan there is a possibility that the new symbol falls under ADA regulations.

“The Accessible Icon may be acceptable under the ADA if it is considered ‘equivalent facilitation’ under the ADA Standards for Accessible Design,” said Mr. Egan. “The United States Department of Justice has not yet addressed this issue one way or the other.”

Thus far, Mr. Egan has only seen the Accessible Icon on buses around the city, and has yet to notice the new design surrounding local businesses. He does not believe employers and even disabled people are fully aware of the state mandated change, and until a firm decision is made he does not expect any significant alterations.

“I think the symbolism underlying the icon is very positive,” said Mr. Egan. “Businesses do need some guidance though on how to comply with both federal and state requirements.” 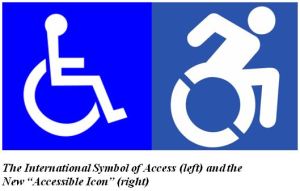