In the waning moments of season six of Nurse Jackie, the drug-addicted health care worker, having been caught red-handed, is fleeing to Miami with a suitcase full of pills when she stops to help a car accident victim. After stabilizing the woman on the side of the road, Jackie hops in her jeep and runs head on into an ambulance. Pills fly, a cop asks if she’s impaired and the final shot of the season is Jackie having her mug shot taken.

At the conclusion of that event, Executive Producer Clyde Phillips revealed that the theme for season six was ‘Deceit, Descent, and Destruction,’ and this certainly held true. When asked about the theme for the seventh and final season of the series, Phillips explained, “Ultimately it’s ‘Truth and Consequence.’ The truth of who Jackie is and ultimate the consequence of how it affects her and everyone in her life. She is undeniably a drug addict. That’s a hand grenade and when that goes off, that shrapnel rips through everybody in her life – her ex-husband, her boyfriend, he children, her colleagues, her best friend, and herself.  There are a lot of self-inflicted wounds from that bomb.”

This may sound harsh, but this is exactly the way Phillips and his team have orchestrated it. “The mission in the writing room is that we need to astonish on every page and every page should be surprising yet inevitable.”

That doesn’t mean that the process was easy, says Phillips. “We found that to be painful, but we know that if we were feeling the pain, then we were doing the right thing.”

After so many years of watching Jackie self-destruct, fans seems to still want more and Phillips reveals why he thinks her story is so, ahem, addictive. “Everybody has pain, so people can identify with Jackie’s pain. We all react to it differently. Everybody has been in the position where they would like to do something to somebody but we don’t follow through because we’re reasonably normal, healthy human beings, not psychopaths.  Jackie is an addict because pain has driven her there. The need and hole in her soul keep her there. What’s that key inside you? What if that darkness you talk to your shrink about is not despair and not this awful thing that you should be afraid of? What if it’s joy and you just don’t know how to handle joy? You’re equally as afraid of joy as you are of despair? It still sends you to the same place, that place where you have to lubricate yourself from the fear and the pain.”

As for what’s to come this season as Jackie’s story moves toward its conclusion, Phillips wouldn’t give too much away, but he did divulge that things will get much darker before the series closes out. “Jackie has to do some things that are extremely unpleasant for her and as she usually does, she tries to squirm out of it, but she’s not successful in doing that all of the time. All of her relationships go through highs and lows. People in her life are understandably confused about how they feel about Jackie. Everything just gets really messy.”

Having seen ten of the twelve episodes that make up this season, I can say that he’s absolutely right – and that there is quite a double entendre when Phillips uses the word ‘messy.’

Phillips did give me clearance tease a few things, so I’ll give you these: Tony Shalhoub joins the cast as a new ER doc (and he’s fantastic!), Zoey and Jackie reach a new level of intimacy that isn’t welcomed by either of them, Akalitus isn’t the only executive that Jackie has to tangle with to get what she wants, a lot of shit goes down in the hospital basement and there’s a road trip. Believe me, this is just a tiny sampling of what transpires this season. And, I’ll give you this as well – all of the episodes move in that ‘quick uncomfortable’ manner that we love about the show, but episode ten is a doozy. If you’ve followed Jackie’s travails for all this time, that episode in particular will truly rip your heart out.

When they started work on this season, Phillips and his team didn’t know it would be there last. “What happened was that [Showtime President] David Nevins asked me to come up with an ending for season six that could serve as a series finale, and I pushed back,” explains Phillips. “I told him that there was still more story to tell. In fact, we wrote the final episode of season six with Jackie in jail so that you had to come back for more. We couldn’t just end the series like that. So, when we started on season seven we came up with a whole series arc and a couple of weeks into working on that, I got a call from David again, and he said, ‘I need you to end this show this year.’ He said the show has lived its life, a good life, so it’s needs to end, and he was right, because for all this time the question has been, ‘is she gonna use, is she not gonna use,’ and I think we had brought her as far as we honestly could with the audience and storytelling. So we came up with an ending and, unfortunately about halfway through shooting this season we realized we had the wrong ending. In the middle of production, toiling through thousand hour days and such, we discovered that what we were leading up to just wasn’t working, that we didn’t have the right ending.”

Coming to grips with the error in the narrative, Phillips gathered his team and they dove in to right the ship. “My amazing writing staff just quickly got back to work and we talked about why the ending we had wasn’t right and understanding what was wrong, we knew how it fix it, and we made it right.”

Phillips insists that the new ending will be pleasing for all of Jackie’s fans, cryptically saying, “We know that we owe it to the audience to be genuine in telling this story, especially after people have invested so much time and energy into following this journey. With that in mind, we came up with something that brings Jackie’s dilemma and her problem and her anguish to a very haunting, graceful and magical ending.”

There are twelve episodes left in the story of Nurse Jackie. It truly has been a long, strange trip, and will continue to be so, right until the very end. 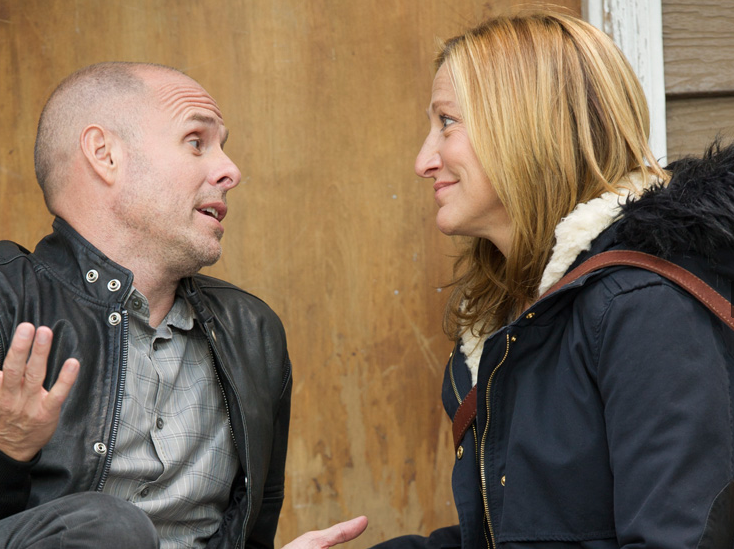