Council Speaker Melissa Mark-Viverito again defended her call for a thousand new cops, arguing that instances of police brutality do not negate the need for more law enforcement on city streets.

“To demand reform and to demand more resources–not mutually exclusive,” Ms. Mark-Viverito, a Democrat, said at a New York Law School breakfast this morning. “I believe and we have put pressure and we’ve been successful as a City Council at holding the NYPD accountable.”

M.J. Williams, a member of the anti-police brutality group Shut It Down NYC, pressed Ms. Mark-Viverito on how she could seek an expansion of the NYPD while police-related controversies, including the recent shooting of an unarmed black man in South Carolina, continue to crop up. Other activists on the left are also opposing the Council’s quest to bolster the police headcount, arguing it will only worsen tensions between law enforcement and communities of color.

But Ms. Mark-Viverito, citing the Council’s creation of an NYPD inspector general and a new racial profiling law, said she had been demanding plenty of reform while advocating for more police. “I’m not saying the NYPD is perfect–never in my remarks did I say that–there are definitely, reform is needed and we are starting to see more collaboration between this police department and us as a Council and our communities.”

Ms. Mark-Viverito and her allies have been consistent in calling for new police over the past year. They did not back away from their request, which Mayor Bill de Blasio opposed for budgetary reasons, after Eric Garner, a black Staten Island man, died in police custody last summer. Police Commissioner Bill Bratton recently broke with Mr. de Blasio to side with the Council about boosting the police headcount. There are about 6,000 fewer officers than there were before the September 11 attacks, even as crime rates fall.

Ms. Mark-Viverito, who had delivered a short speech on criminal justice reform, said that more police would allow for “effective” community policing, where cops in theory could walk the beat and familiarize themselves with the neighborhoods. “Effective community policing needs more resources, not less, and so we need to make sure that we are doing that. We want to continue to maintain our streets safe and our communities also request that,” she said.

“It is a priority for us that we provide more officers on the ground to do effective community policing [and] at the same time we continue to demand reforms,” Ms. Mark-Viverito added. 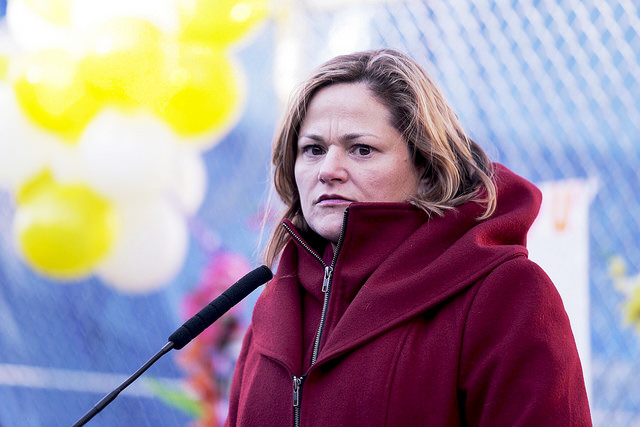