Going to the dentist is rarely a good time, but patients visiting the dental hub at 30 Central Park South have long enjoyed stunning views of the Park. Maybe not much longer, though. The New York Times reports that the many commercial condo owners are considering banding together to sell the entire building, which would require 80 percent.

Williamsburg is now a prime place to build condos—so much so that developers have said that land costs are too high for rentals—but developer Toby Moskovits is envisioning office space for the neighborhood, according to The Wall Street Journal. All that stands between her and a 9-story building at Kent and N.12th is zoning, which prohibits what would primarily be an office building in a manufacturing district. Whether or not she gets it is likely to be a test case for how the de Blasio administration will deal with industrial zones.

Income discrimination may not violate fair housing laws, but age discrimination certainly does and the rent-stabilized tenants of Stonehenge Village on the Upper West Side barred from using the gym (even if they pay!), are largely over 65. Thus, they may in fact have a discrimination case that will hold up in court, according to the AP, via Crain’s.

At One Brooklyn Bridge Park, a couple with an 11,000-square-foot condo combined from 9 units (and the blood of virgins?) can’t even find each other because their house is too big, according to The Wall Street Journal. (h/t Gothamist): A few months ago, Stuart Leaf was sitting in his Brooklyn Heights apartment when he got a call from his wife asking when he’d be home. It turned out ‘we’d both been home for three hours,’ he said—their roughly 11,000-square-foot condo is so large that neither one realized the other was there.” You, too, can lose your spouse for just $32 million.

Also in Brooklyn Heights, Curbed tours the studio apartment of an education enthusiast who eschewed Ikea after a break-up: “Her resolve to furnish without the help of the Swedish furniture purveyor was born out of a desire to have things that will last.”

Yesterday during rush hour, a 7 train was stuck for more than an hour below the East River by a mechanical mishap, according to The Wall Street Journal. Like frequent users of many other lines, 7 train riders complain that the line has experienced greater delays in recent months in addition to many work shutdowns.

In other sad news, Gothamist has found an online survey for mobile dating app Clover that discovers the top two locations for first dates are Starbucks and Chipotle, followed by Panera Bread and the Cheesecake Factory. As Gothamist notes, most places don’t even serve alcohol! “It’s unclear who their demographic is. Maybe they live near malls. Or rest stops. Or in church basements.”

In such a field of restaurants Applebee’s doesn’t look too bad. Unless you get mugged on your way to a date, as DNAInfo reports one couple did when they were walking to the restaurant at 12 a.m. (12 a.m.?). 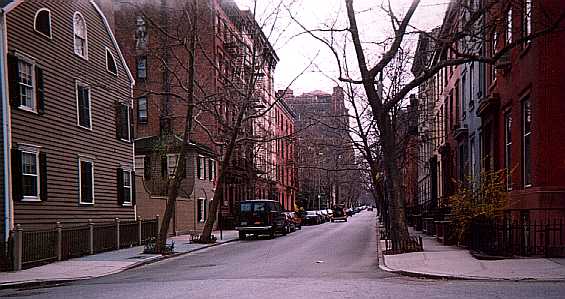