The Bronx’s “Castle on the Concourse” will be torn down in coming weeks to make way for an affordable housing complex, Crain’s reports. Landmarked in 1986, the city-owned former school was left to rot, the city exempted from the requirements that would have mandate its maintenance were it privately owned.

In Manhattan, St. Patrick’s Cathedral, another landmark, is renewing a push that would allow it, another church and several synagogues to sell air rights to developers beyond those of adjacent properties, The Wall Street Journal reports. The city created a similar exemption for a few designated landmarks in 1968.

Contractor Skanska will get an extra $25 million to finish the Rockaway Boardwalk on time, according to DNAInfo, on top of the $274 million that’s already been allocated to do the job. The rising cost of procuring and installing concrete planks, requests for improved beach access, more seagrass and additional labor to finish on time by summer 2017.

Maybe the city should consider maintenance and repair costs a little more carefully in the case of “Diller’s Island,” the pier that would jut into the river at 13th Street and replace Pier 54 with an amphitheater and knolls. The New York Times takes an in-depth look at the $113 million gift from the media mogul that the city agreed to take without any public review or seemingly, much consideration as to whether it should be spending $17 million on a billionaire’s grand vision rather than funneling those funds into the needs of existing parks. The moral of the story: philanthropists like showy new parks and have a hard time getting excited about the repair and maintenance of existing parks. Approach for donations with caution.

On the topic of vanishing things, The Times profiles Jeremiah Moss of Vanishing New York and his “radicalization” from wistful chronicler of disappearing institutions to some who is actually trying to save them, a change that set in when he fought to save Cafe Edison. Spoiler alert: we do not find out Jeremiah Moss’s real name, but there is a distant, hard-to-make-out photo of him!

In Crain’s, James Hickman argues that the value of a taxi medallion, which rose about $1 million for the first time in 2013, is about to plummet. With the rise of Uber and Lyft, the traditional method of determining who gets to operate a taxi is becoming obsolete, as more riders and drivers opt for other services (that might, of course, change, depending on whether and how the TL&C regulates such services in the future).

Robert A.M. Stern calls Mayor de Blasio “naive” in an interview with the Post, pointing out that Sunnyside Yards redevelopment has been studied for decades, but the only way to pay for it is with super-tall office towers, a la Hudson Yard. Affordable housing, not so much:  “I think the mayor is a very well-intentioned man in many respects. Sometimes, I think his intentions are naively realized.”

Also, NYCHA has been boasting of late how they’ve cut down their backlog of 330,000 repair requests by 95 percent in the last few years, but ProPublica finds that the reality is quite different in the housing authority apartments. While NYCHA insists that “If you call us with a leak on Monday, what we’re saying is we’re going to send someone to your house within seven days,” but tenants have proof that they’ve been waiting for months and even years for repairs, with nothing to show but repair tickets.

Last of all: do not leave your $20,000 engagement ring in a gym’s bathroom. DNAInfo reports that a woman working out at the Upper West Side Equinox forgot her purse in the bathroom stall, and when she returned 15 minutes later, it was gone, with the ring inside. Hope it was insured. 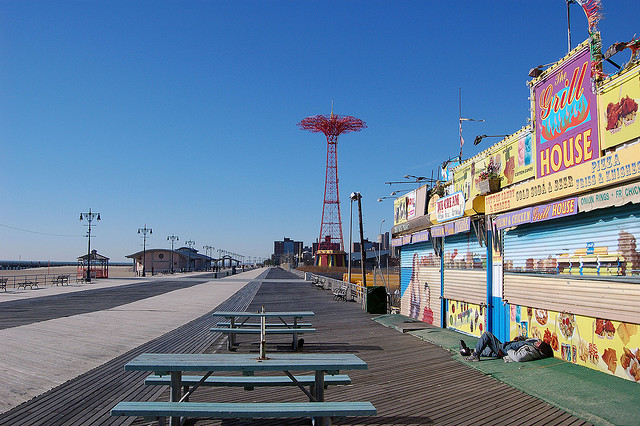