If you’re like me, when you watch quality scripted TV these days, you’re often left somewhat disoriented. The show doesn’t always tell you what the hell is going on. You don’t have all the facts; you’re seeing just a piece of a bigger picture that is only slowly coming into focus.

And if you’re like me, you love this feeling. Because (for the most part) this is one of the signs that television is getting better. That it is slowly abandoning its apparent need to talk down to us all the time, as if its average viewer was a slow 12-year-old who needs to have his hand held and be led carefully through each plot point. Letting us figure stuff out on our own, not connecting all the dots for us—that’s one of the marks of a good modern television show.

Take one a central scene in last night’s season-three premiere of Orphan Black. Delphine, the new interim head of Dyad, back from her exile in Germany with a fresh makeover, a ruthless gleam in her eye and apparently fewer lesbian leanings, is in something of a bind. She needs Sarah to pose as Rachel, who is herself suffering from an acute case of having a pencil lodged in her eye, in order to fool cold-blooded “cleaner” Ferdinand (the ever-creepy James Frain). Otherwise Ferdinand could decide to tell Dyad’s supervisors in “Topside” that the clones are out of control and have them all exterminated.

We get glimpses of Felix giving Sarah a Rachel-style makeover, complete with angular blond wig, trading in her wharf-rat accent for Rachel’s clipped upper-crust mewl, and then she’s ready for her close-up. But after Ferdinand talks to “Rachel,” he also wants to see Dyad’s new prisoner, i.e. Sarah. Which is clearly a problem, what with Sarah standing right next to him in a blonde wig. But then they open the door to her cell, and there sits Sarah—or a reasonable facsimile thereof.

It becomes clear that this is, in fact, Alison in disguise as Sarah. (“Oi Oi Rachel!” she blurts in a ridiculous punk-cockney accent. And the debate over which clone is the most awesome can finally be put to rest right there: the best clone is clearly Alison pretending to be Sarah.) But the viewer is still left to puzzle it out on her own: Why is Sarah playing Rachel and Alison playing Sarah, instead of Sarah playing herself? Oh right, because Alison has never met Rachel, so she couldn’t pretend to be her convincingly. Meanwhile Cosima, who has met Rachel, can’t do it, lest she start coughing up blood and blow up their spot (also, getting her dreads under that wig would be quite the feat). So despite the fact that Sarah is there anyway, the most logical plan is to use Sarah as Rachel and Alison as Sarah.

A lesser show would have spelled this all out for us, showing a scene where they all powwow and discuss who is going to play what part. But Orphan Black just drops us into this weird situation and lets us reconstruct what must have happened behind the scenes. We’re thrown off-balance—just like the show’s characters, who generally find themselves in the position of having less-than-complete information and left to flounder until they get closer to the truth.

Of course, a lot of mystery or suspense narratives generate interest by aligning us with their characters in this way. In a mystery tale, we start from a lack of knowledge, and then follow along with the detective-protagonist, putting the pieces together with him.

But detective stories bend toward closure; eventually the truth is discovered, and we all go home happy. A show like Orphan Black, on the other hand, runs entirely on partial knowledge. Nobody ever has the whole picture; every half-solved mystery just leads into a new one. Each time we are offered a character who looks like they might be the all-knowing figure who will reveal the whole truth to us—Cosima, Doctor Leekie, Doctor Duncan—they turn out to have only a piece of the puzzle.

Last season ended with yet another person who seemed to have all the answers we needed: Marion Bowles, a member of Topside’s shadowy futurist cabal, who let Sarah (and us) in on the secret of the male Castor clones. But this season starts out by telling us that Marion herself has only known of the existence of the male clones for less than a month. As to what these boyclones are doing, what they want, or why they seem to be obsessed with the female clones (including a new one, the briefly glimpsed Crystal), she’s as in the dark as we are.

This lack of clear information isn’t just a way that Orphan Black chooses to be challenging. Partial knowledge is a central theme, perhaps the central theme, of the show.

After all, this is a show about genetics—and compared to the small amount we actually know about how our genes work, the things we don’t know are a vast ocean. (A metaphor that is not really my invention. It’s there constantly lapping at the margins of The Island of Doctor Moreau, just like Doctor Duncan’s secret 11 herbs and spices diagrams. The man certainly didn’t choose his clone-recipe hiding place lightly.)

Just like the almost-but-not-quite-DNA shapes that populate the show’s opening credits, knowledge in Orphan Black is something that rises to the surface and then breaks apart, gives us hints of its form but never quite comes into focus. Its characters react by constantly guarding knowledge, hoarding it, not only trying to figure out what is true, but to figure out what each of the others knows, and how.

Much of last night’s episode, for instance, revolved around other characters trying to determine whether Rachel knows/knew about Helsinki—a previous episode in which Topside decided to exterminate a whole group of clones. The once rather meek Delphine is now pressing her thumb into possibly-brain-damaged Rachel’s mangled eye to find out. (Rachel did, in fact, know, which Sarah learns while posing as her and engaging in some rough sex play with Ferdinand, which she manages to parlay to stop a Helsinki part deux.)

Meanwhile, Cosima is the only one who knows where Duncan’s secret clone codes are, but she chooses to share it only with Scott, rather than with her sisters (despite their constant assertions that they are a single sisterly unit). And our two new boyclones (let’s just call them Scarface and Creepstache) seem pretty intent on getting this info, beating Mrs. S into a pulp to try to get it out of her.

Not that she didn’t deserve it, as she went behind Sarah’s back and traded Helena to Paul Dierden in a complex three-way deal: Paul gave information on Castor to Marion Bowles in return, while Marion agreed to rescue Sarah and Kira from Dyad for Mrs. S.

And now nobody seems to know where Helena is or who has her, just that she is in a crate somewhere, trapped with a scorpion that may or may not be real. (The fact that the arthropod is apparently voiced by Tatiana Maslany—who, it should be well established by now, can do pretty much anything —strongly suggests that it is just in Helena’s intricately twisted head.)

And on a completely different note, Donnie quit his job and Alison is running for school trustee. And for some reason this is important. In a science fiction show about clones. But I shouldn’t be so quick to judge. Every time I think an Alison-centric plotline is just a comic relief sidetrack and completely beside the point, Orphan Black has a way of incorporating it back into the main story in ultimately momentous ways. 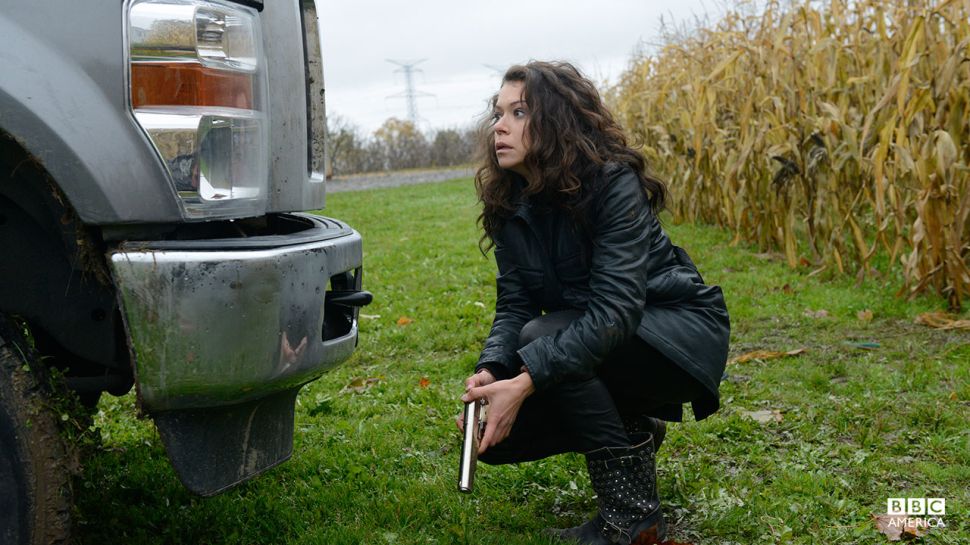