If push really came to shove, what wouldn’t you do for your family? How far would you go to protect them? If your family needed it, would you steal? Cheat? Put yourself in harm’s way?

What if it was your twin sister who needed you (or someone even closer than a twin)? Would you sacrifice your happiness for her?

How about if you’d only just met her? Would you still kill for her?

For all of the clones and the cloak and dagger, Orphan Black is in its own unique way a story about family. It constantly confronts us with questions about the value and meaning of “blood.” Faced with choices at the extreme limits of the definition of family—families created in labs, or under duress—what would you do? How would you act?

Let’s say you’re the adopted mother of a whole family of boys. Your sons are dying. Would you kidnap and torture a woman if it could mean saving them?

Or say you had an adopted daughter. Would you trade the life of her biological twin in exchange for her and your granddaughter’s safety?

And if you were the daughter, could you ever forgive your mom? Would you move heaven and earth, and possibly put your own child in danger, to save your twin sister?

Let’s say you had a twin brother (or even closer than a twin)—would you share everything with him, if he asked? Would you keep his secrets, even if they killed him? If he were dying, in agony, would you put a bullet in him? If you did, would it be out of mercy?

Until this season, Orphan Black has focused its questions of family on Sarah: her clones, her adoptive mother and sister, her daughter. But with the introduction of the male Project Castor clones, the show widens the scope of its bizarre inquiry into how family relationships really work—and the results are as befuddling as ever.

Last episode, “Transitory Sacrifices of Crisis,” centered on two of the Castor clones, who now get names: “Scarface” is Rudy, the aggressive and outgoing one, and “Creepstache” is Seth, the self-effacing shy one. They’re still both psychos, though. It’s not clear (as of yet) if they’re so creepy because they’re just poorly made clones, because of something the military did to them, or because of their weird clone upbringing (I vote for all of the above).

But something is clearly very wrong with them. Like Cosima, but with very different symptoms, Seth is not well at all. And they are on a mission—an actual official military mission—to find a cure.

We open on Rudy seducing a woman in a hotel room, while Seth lurks in the shadows and then eventually joins in on the fun. This understandably freaks out the young lady, and she takes off, but not before the Creeper Twins take her hair as a DNA sample. Which seems to have something to do with their quest for clone answers, but who knows. Maybe she’s just some random chick and they pulled out a strand of her hair as a trophy.

Anyway, she goes to the cops, and Art (remember Art?) sees that her assailants share a face with the Prolethean Mark (currently holing up with his pregnant child bride in a motel somewhere). So he calls Sarah, who was just in the middle of checking out Cal’s new downtown apartment with him and Kira and entertaining fantasies of a normal life. (Generally peripatetic Cal seems to have bought the place and offered to settle down in attempt to throw money at the issue of his fractured family unit, and probably also to whitewash a bit of his war-profiteering past.)

But Art’s call reminds Sarah that the Castor people have Helena. Instead of staying with Cal and playing house, she has to go back to Mrs. S, yell at her some more about selling Helena out, and ask for Paul Dierden’s contact info. S doesn’t have it, but she does have a few cracked ribs and a black eye from her run-in with Seth, as well as a whole hell of a lot of remorse. Fat load of good that does, though, since she has no way of getting in touch with Paul.

Paul, it turns out, is some kind of handler for the Castor clones, and his whole time as Beth’s (and then Sarah’s) (and then Rachel’s) “monitor” was really his infiltration of Dyad for the military to find out clone secrets. But he clearly didn’t find enough to cure whatever ails the Castor boys, so now he’s sent Rudy and Seth in.

He comes to the hotel to test them to make sure they’re not “glitching” out in the field, giving them a weird logic-puzzle version of the Voight-Kampff test (which, tellingly, was supposed to tell the difference between humans and “replicants”). Seth fails, but Rudy covers for him. Paul orders them back to base anyway, but Rudy disobeys and goes to the loft to try to find Duncan’s original clone lines, which presumably will cure Seth.

We still don’t know whether these clone originals actually exist. Cosima meets with Doctor Nealon, who has proposed that they work together. He declares that the clone originals were destroyed. But Helena did take something preserved in liquid nitrogen from the Proletheans last season, and it is now hidden in the loft.

Rudy doesn’t find it, but he does find Kira, and takes her hostage in order to grill a now-hysterical Sarah about Duncan. Lucky for her, Seth chooses this moment to go into total system shutdown downstairs. Rudy pops out, sees his brother writhing on the ground, shoots him dead—in what reads as both an act of mercy and a desire to just be rid of his millstone of a brother once and for all—and takes off.

Sarah now realizes that her quest for Helena will always make Kira a target. With Mrs. S’s help, she sends the kid off to Iceland with Cal, and resolves to find Helena and put an end to the insanity for good.

Helena is somewhere in the Middle East, under the care of a new character named Doctor Virginia Cody. She appears to be both the head of Project Castor and the adoptive mother of all of the clone boys. And in order to save her sons from falling apart like Seth, she is going to find out what makes Helena tick. First they waterboard her, but then they find out she’s pregnant and change tactics, subjecting her other kinds of tests, including the logic puzzles that Rudy and Seth went through. Of course, Helena is too literal for abstract reasoning (and too food-obsessed to let a question about mangoes go) so they get nowhere.

And rounding out Clone Club is Alison, off in her own little Bailey Downs bubble, busy breaking bad. Faced with impending debt now that Donnie is out of work, but still resolved to run for school trustee against the incumbent (who wants to redraw district lines to prop up her own real estate practice), Alison decides to kill two birds with one completely bonkers stone and become the local pill-pusher.

She buys out her old dealer Ramon’s business, convinced that not only will it assure her family’s financial future, but will guarantee her a ready-made voting constituency among her chemically dependent fellow soccer moms.

So now Alison is a drug dealer. It’s compelling to see her as the flip side to Orphan Black’s focus on the extremes of family. Sarah the criminal, the wild loner, has become a crusader on behalf of her sisters; always running from her family, now she’s running toward them. Alison, on the other hand, has always been focused on her family, and she still is. But she’s going about it in such an off-kilter way—yet another Alison move that makes you see there’s always been a whole lot of Sarah in her. You can adopt adorable children and move to the suburbs, but you can never escape your biology, after all. 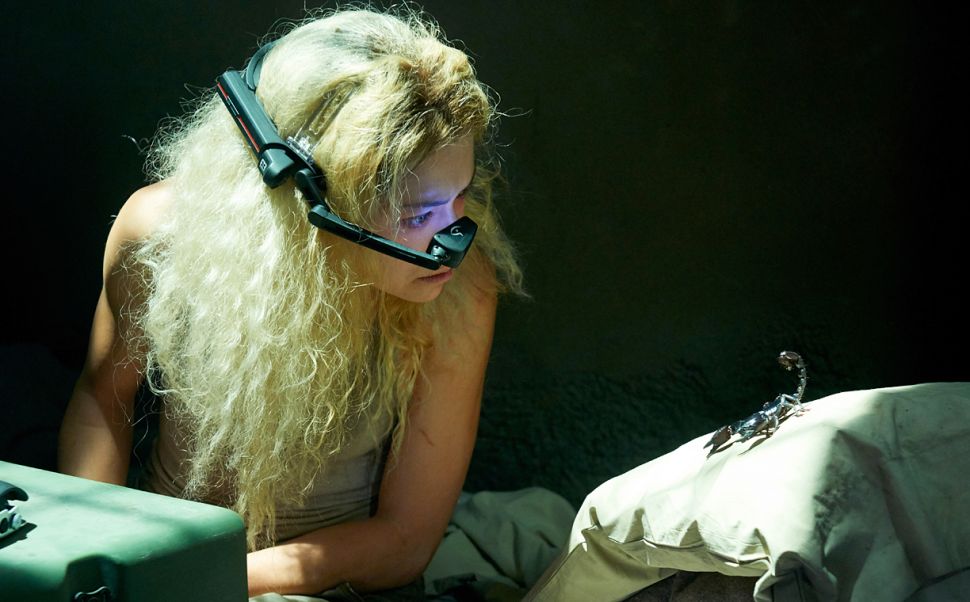