A partial inventory of things that made me say “This is exactly why the good Lord gave us pay-cable period pieces” on tonight’s episode of Outlander:

If it’s entertainment value you’re after, you could do a whole lot worse than “By the Pricking of My Thumbs,” this week’s installment in the ongoing unstuck-in-time adventures of Claire Beecham. Let’s start with the sexy stuff, because hey, if the show can do it, why can’t we? Unmoored from the overhyped wedding-night episode and the baffling tone-deafness of last week’s sex-and-violence cocktail, Jaime and Claire’s chemistry is at last free to just kind of establish itself as its own thing. And from Claire’s high-pitched sighs of pleasure, to Jaime’s refusal to answer the door until they’re finished, to the non-TV-standard positioning of their bodies at the beginning of the scene, that chemistry burns hot. But once you’ve finished fanning yourself, you realize it communicated character, too. Jaime goes down on Claire with the same earnest eagerness and insistence with which he does pretty much everything in life; Claire is relaxed and languid on the receiving end, comfortable and confident in her own skin, just as she is in virtually every situation she encounters. By all means, Outlander, keep ripping those bodices if you’re gonna find that kind of quiet insight underneath.

Local nurse practitioner/witch/murderer Geillis Duncan has a similarly strong grasp on her sexuality, and again, its specific contours speak volumes about who she is. The summoning ritual she performs in the forest comes embedded in a Chicago-style deep-dish pizza amount of cheese, with enough torchlight trees, diaphanous gowns, interpretive dancing, and New Age baby-making music to make writers of erotic Enya/Yanni fanfic say “okay, that’s enough.” But Geillis’s devil-may-care charisma cuts through the moonlit mozzarella. Proudly exhibitionistic—she tells Claire, who catches her in the middle of the quasi-masturbatory rite, “I always like to imagine someone’s watching me” before pointing out how stiff the night air makes her nipples—she’s equally brazen about her affair with Dougal MacKenzie, her maybe/maybe not involvement in their spouses’ sudden deaths, and her refusal to run when the law comes calling for her later in the episode. If you’re watching the scene in the woods just to catch a glimpse of actor Lotte Verbeek in the buff, well and good, but don’t miss the real point: Geillis is the kind of person determined to let her freak flag fly, in private or public, for good or evil.

But the most spectacular entrant into the show’s sexual sweepstakes never revealed so much as an ankle. The great Simon Callow made his debut as the Duke of Sandringham, the foppish big shot with secret ties to both the brutal Black Jack Randall and his sworn enemy Dougal MacKenzie. (The latter link derives from bribes from Scotland’s Jacobite contingent; the former is never fully explained, though the implication is that it’s scandalously sexual in nature.) Everyone who talks about the Duke makes him sound like a relentless horndog, but our encounters with him give little indication of that. Callow plays the character as a guy who enjoys the company of handsome dudes, sure, but in a manner consistent with his overall love of leisure and pleasure. He delights in wordplay, gambling, drinking, dining, the company of vibrant people, and the forging of political alliances that allow him to revel in his own cleverness. It’s this last bit that seems his true passion, even more than men: As I took notes on the episode, no sooner would I write down some funny thing he said (“LIBELOUS FFFFFFALSITIES!”) than the he himself would instruct his assistant to do the same thing. The Duke of Sandringham is his own favorite character.

So yeah, a lot of fun stuff went down (no pun intended). And some not-so-fun stuff, too, like the grim but thoughtfully handled sequence in which Claire discovers a crying, sickly baby left out in the forest to die. She’s horrified by the custom, which attributes infant mortality to “changelings” left behind by faeries who’ve kidnapped the “real” baby. Jaime points out that in the absence of any hope of saving the child’s life, parents draw comfort from the idea that it isn’t their child at all, and that their actual baby will live happily ever after with its magical captors. It’s the first time one of this show’s “makes you think” moments actually has made me think.

As filmmaking, too, the episode has much to recommend it. Several shots were sit-and-stare affairs: the uphill view of the tree where Claire and Jaime cared for the dead baby, the cloudy-bright afternoon sun shining in the castle courtyard as Claire returns from her visit with the Duke, the Barry Lyndon tableau of the duel participants at the Duke’s great house, the shot of all the revelers at the Duke’s welcome banquet sitting silent in the splendid candlelight as they watch Geillis’s husband die.  Director Richard Clark also continues one of the show’s trademark leitmotifs: tracking shots of Claire striding purposefully through her new surroundings, subliminally reinforcing the idea that this woman is determined to be the master of her own destiny.

With all that going for it, it’s almost a good episode, but its weaknesses spoil it like brown spots on an apple. If Dougal’s love for Geillis is as true as everyone says, why has he repeatedly come on to Claire, both dead drunk and stone sober? If Geillis murdered two innocent, sickly people, why does Claire find her so worth protecting? If the fight that breaks out between Jaime and the hotheaded young members of Clan McDonald at the Duke of Sandringham’s duel is indeed the “common brawl” the Duke calls it, why does a squalid and pointless bloodletting like that get a rousing Hero of the Highlands soundtrack? If lovesick young Laoghaire MacKenzie is going to become Claire and Jaime’s nemesis, must she be so smirkingly unsympathetic? Sensation and spectacle mean little without a serious support structure. Sex is powerful, Claire is compelling, Geillis is magnetic, the Duke is delightful, but none of that matters if the overall show can’t sustain them. 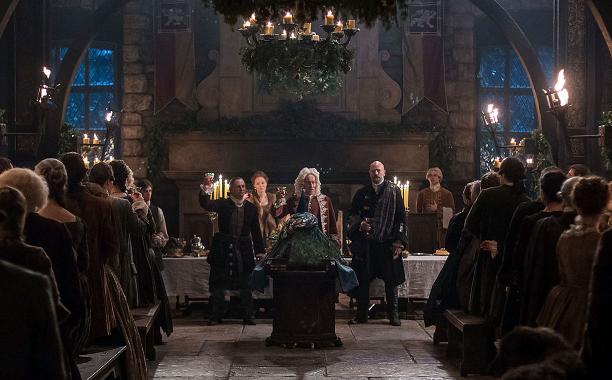