Is it just me, or does the season of the witch start earlier every year? Seems like you see Samhain decorations on sale at the market the week after Midsummer’s Day. And if I hear one more burning carol, I’ll light myself on fire, ye ken? Thanks folks, you’ve been great, I’ll be here all week.

Apologies for not treating the witch trial at the heart of “The Devil’s Mark,” tonight’s episode of Outlander, seriously, but the thing is that the filmmakers didn’t either. Sure, it ended (as things on Outlander often do) with two women being stripped, shamed, and assaulted, one of whom is then carried off to be burned to death while visibly pregnant. But as is so often the case with this show, moments of power or pleasure are perpetually undercut by slipshod scripting and a dearth of characters capable of taking the weight.

In a courtroom drama such as this episode, these failures become all the more dramatic. We in the audience know that Claire is innocent, and that Geillis…well, no, Geillis is guilty as sin, not of witchcraft but of murder, which is worse because it’s real. But for reasons I can’t quite fathom, the show wants us to still see her as sympathetic, as if her Jacobite sympathies, her true love for Dougal MacKenzie, and her big time-traveler reveal make it okay to poison some poor sap to death with arsenic and cyanide over the course of months. Point is, every second spent on this trial involves the story asking a question we already know the answer to: These women don’t deserve to burn. With the moral destination set in advance, getting there has to be all the fun.

But at every opportunity, the show takes the low road, populating the trial with one-dimensional enemies and mindless hordes fit only for the audience’s contempt. The judges and prosecutor are straight out of Old Fashioned Asshole central casting. Laoghaire MacKenzie, the star witness, enters the courtroom to the sound of an ominous gong, just in case you wondered if she was a bad guy. But if you missed that bit because you were in the bathroom or something, don’t worry: Later, she actually tells Claire “I shall dance upon your ashes.” If she had a mustache, she’d twirl the shit out of it. Then there’s the fanatical priest, who fakes a change of heart about Claire so complete that everyone’s convinced it was witchcraft—instead of what it was, which is an unnecessarily complicated plot twist with a whopping 15-second payoff. The guy looks and sounds like the parish’s personal Pinhead. There are no surprises here, no nuances, so sense that anyone’s doing anything for any reason other than “this is this kind of story, and that’s what that kind of person does in this kind of story.”

Things hardly improve when the trial ends. As the Geillis crowdsurfs to her date with the stake—an admittedly strong and disturbing image—Claire flees with Jaime, whose last-minute rescue of his condemned wife (yes, a last-minute rescue on Outlander; I hope you were sitting down) was arguably the episode’s corniest moment. Sensing that there’s more to her story than he’s been told, he asks her to be honest with him about whether she’s a witch. In response, she tells him she’s a time-traveler instead, laying out the whole story, up to and including the fact that the Jacobite Rising is a lost cause. Jaime believes her completely, which we’re meant to take as a sign of the depths of his love. Rather, his wide-eyed credulity reads as though he’s just too genially dimwitted to disbelieve any story told polysyllabically. Claire could just as easily have convinced him that she’s not really a normal-sized woman, but three tiny ones standing on each other’s shoulders.

The couple camp out for the night, their future uncertain now that Jaime knows she’s been separated from her 20th-century husband and has been trying to return to her own time. So he does what anyone would do and wakes her up by fingering her. (In the immortal words of John Cleese, “What’s wrong with a kiss, boy, hm? Why not start her off with a nice kiss? You don’t have to go leaping straight for the clitoris like a bull at a gate. Give her a kiss, boy!”) But apparently he’s got the hottest hands in the Highlands, because the next day she turns down the chance he provides her to return to her own time, opting instead for a life of routine threats to her physical and sexual safety by members of a culture that will be hounded into extinction by its brutal occupiers within a few years, and also some romance I guess, here in the 18th century. I’m glad one of us figured out a reason to stick around, anyway. 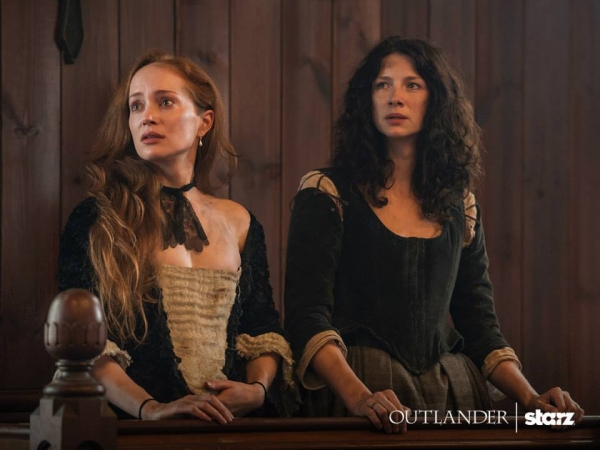