It’s a cliché to say the setting of your series is a character in and of itself. In Outlander’s case I wish it were true, because it’d be the most interesting character on the show. In its unique moving title cards, which spotlight a different microsection of Scotland every week—a murmuration of starlings wheeling above a loch, say, or a hand loading gorgeous old guns for a duel, or a big ol’ dog curled up in front of a roaring fire in a well-appointed sitting room—the filmmakers’ obvious affection for the Highlands and its homes all but radiates from the screen. This week the visual love letter extended into the show proper, with sweeping aerial views of Jaime and Claire Fraser riding over the green hills, sumptuous interior shots of their china-blue bedroom, and a set piece at a mill powered by a stream so clear that its cool could give you goosebumps right there on your sofa.

The rest of “Lallybroch,” tonight’s episode, just makes you groan. We’re a dozen episodes deep into the show now, and it has yet to produce a three-dimensional antagonist for our heroes, either in major or minor form. On the latter score, the lout who beats his son until Claire and Jamie intervene exists for no other purpose than to be the guy who beats his son until Claire and Jamie intervene; the subplot is therefore neither enlightening nor entertaining. When you’re a writer, there are no rules—stock characters are only stock characters if you write them that way. It’s hard to fathom that showrunner Ronald D. Moore is the same guy who consistently turned audience sympathy on its ear with the many human and robot creeps who populated his mid-‘00s masterpiece Battlestar Galactica.

As for major players, Jamie’s stubborn sister Jenny is a livelier member of the extended Clan MacKenzie family than most, and actor Laura Donnelly makes it seem like the character’s every insult and outrage was thoroughly thought through before she opened her mouth to unleash them—when she gets nasty, it’s for a reason. But I don’t care how reasonable it is: After a full hour of it, the nastiness gets old. When the inevitable rapprochement between the siblings takes place at the end of the ep, it’s predictable, not powerful, a relief only in the sense that their obnoxious sparring is finally over. (It’s also the plot of the Cochise picture from The Three Amigos!)

Even the dramatic high point of the hour, the further story of how Black Jack Randall preyed upon the Frasers, does more harm than good. The revelations pile up one after the other: He never raped Jenny because he couldn’t get it up (and there’s actor Tobias Menzie’s flaccid dick if you needed proof). He flogged Jamie to the brink of death because the lad had turned down his advances. Jamie and Janet’s father dropped dead while watching Randall torture his son. But the show has already proven beyond a shadow of a doubt that Black Jack is an irredeemable monster, so the entire storyline is just flogging a dead Scot.

And it makes it even harder to believe that a born soldier like Jamie would have spared Randall’s life back when he broke into Fort William to rescue Claire. As far as Jamie knew at that moment, this man nearly tortured him to death, gave his father a fatal heart attack, raped his sister, wanted to rape him, and was in the process of raping his wife when Jamie interrupted. In any sane adventure story our boy would kill this bastard so hard his ancestors would have to go to the hospital.

With so much story that’s either rote or nonsensical, the early exchange in which Claire explains airplanes to her awestruck husband stands out, for all the right reasons. What would a time traveller from 200 years into the future tell the man she loves about the world to come? Here’s the thing: I have no idea! That’s an exciting feeling! Stories should head into the great unknown wherever possible. Instead of a boring family feud and superfluous Black Jack flashbacks, we could have had an episode in which the two of them talk about electricity,The Wizard of Oz, indoor plumbing—or on a far more serious note, the World Wars, the atom bomb, the endless struggles and successes and setbacks that the oppressed will experience long after the Jacobite Rising is a distant memory. If only Outlander were as interested in pushing the envelope in its main characters’ heads as it has been in their beds. 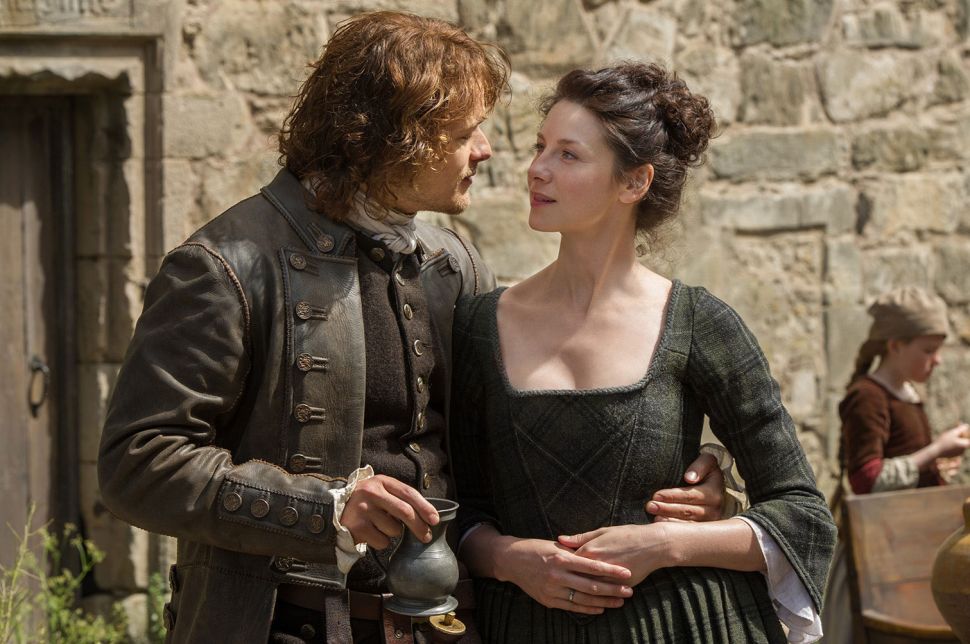