Claire Beauchamp Randall Fraser had a long, long day. Over the course of Outlander’s half-season finale, which aired last fall, and its mid-season premiere, which aired tonight, she was raped, killed her rapist, went on the run, abandoned her new husband, found the magical standing stones she’d been searching for for weeks, heard her old husband’s disembodied voice through the chasm of time, got inches away from touching the stones and warping back to her own time, got pulled away and arrested at the last second by British troops, was taken captive and shipped to the British stronghold, nearly outfoxed her sadistic captor Black Jack Randall before getting outfoxed by him in turn, was sexually assaulted and threatened with torture and rape by him at knifepoint, got rescued at the last second (again with the last second) by her new husband, made a daring escape from the stronghold, had a knock-down drag-out fight with her new husband for the first time, and finally made her way to an inn where the new husband…stripped her and spanked her for disobedience while zany fiddle music played in the background.

People. What the fuck?

Bad as “The Reckoning” was — and it was bad, alright — this episode merely illustrated problems Outlander has displayed for most of its first surprise-hit season. And many of those weaknesses lie precisely where supporters of the show locate its strengths. This makes for a hugely frustrating, even confusing viewing experience. How can a show that supposedly gets so much right go so wrong?

Granted, not everything’s a misfire. It genuinely is pretty great that Claire’s enthusiasm for sex is depicted as, you know, fun. In the immortal words of Maude Lebowski, sex can be a natural, zesty enterprise, but too often highly sexed people are depicted only as sluts, freaks, addicts, or predators. Don Draper, Theon Greyjoy, and Elizabeth Jennings are all well and good, but characters like Claire Beauchamp, Ilana Wexler on Broad City, and Martha Hanson on The Americans treat sex as a central and important part of their lives not out of compulsion or self-destruction, but due to the simple fact that fucking is a fucking awesome way to spend your time, like reading or brunch. Just as some people use their library cards or drink mimosas more often than others, there are folks who build perfectly normal, happy lives around frequent orgasm opportunities, and there shouldn’t be shame in that.

Moreover, I’m even open to the idea that Outlander, as a romantic fantasy, can get away with behavior we wouldn’t accept in real life. Such an acknowledgement always seemed strangely absent from the great debate about 50 Shades of Grey. Discussing issues of consent, abuse, and stalking as if Christian Grey and Anastasia Steele were real people instead of characters in a work of pornography doesn’t make sense. In fantasies, we can think about and get off on doing things, and having things done to us, that we’d never want to actually experience. 50 Shades is just such a fantasy. Safewords and restraining orders are as out of place there as a physics lesson in a flying dream.

So the problem with Outlander isn’t in addressing these complex, adult issues. Rather it’s in wedging them into a show that otherwise displays all the sophistication of Dr. Quinn, Medicine Woman. (Posh medical expert journeys to the frontier and falls for a long-haired he-man? The parallels are seriously uncanny.) Quick: Name a difficult or demanding moral or ideological topic the show addresses when the characters have their clothes on. Ye ken as well as I that there’s no such animal, sassenach. And no, “Black Jack Randall is really fucked up” doesn’t count; tone down the gore and the gleeful sociopathy and he’s just one of those Army guys who chased the A-Team. A show with ideas as wafer-thin as Outlander’s simply can’t handle heavier fare.

Were it to try, or even were it simply to stay the course as a handsomely shot adventure story with occasional Skinemax-style simulated oral sex, it owes the viewer a better cast to do it with. Caitriona Balfe is dynamite as Claire, more than capable of conveying all her conflicting drives, desires, truths, and lies. Next to Claire, Graham McTavish’s Dougal MacKenzie is the most commanding presence on the show, by far the standout among the Highland characters; he’s convincing both as a born leader and as a man capable of moments of genuine unhappiness and vulnerability. The two of them are the only actors on the show who make their characters feel like they have thoughts and emotions not directly articulated by the script or the score. Other than Lotte Verbeek, who plays local herbalist and alleged witch Geillis Duncan with the delighted grin of someone who’s having a much better time than everyone else and knows it, no one else emerges from the fog of capes and kilts to shine.

Balfe, moreover, is stunning—a perfectly valid topic to discuss for the entire cast, given the importance of sex appeal to the show. She’s tall and pale and elfin, like a brunette Cate Blanchett. (It’s nice to see the casting department taking notes directly from my id, by the way; I’d love to see a redhead Monica Vitti next, thanks.) The problem is that she’s almost too good-looking, given actor Sam Heughan’s generic Highlander Hunk vibes as her 18th-century love interest, and Tobias Menzies’s perpetual scowl as both her 20th-century husband and 18th-century nemesis. Menzies in particular may well be the most unhappy-looking actor on television; it’s hard for sparks to fly when one of the required catalysts looks and sounds like he just found out his cat’s tumor has metastasized before every scene. By contrast, True Blood and Game of Thrones’ stories offer veritable parades of perfect people, male and female, and Mad Men couldn’t have gotten away with wedding the lives of January Jones, Jessica Paré, and Christina Hendricks to anyone shy of Number One Handsome Man Jon Hamm. For all the ballyhoo about Outlander’s equal-opportunity nude-body eye candy (not quite) and nonjudgmental depiction of female desire (I’ll give them that for sure), it ought to employ actors as freakishly attractive as its leading lady.

As it stands, the show doesn’t even trust its existing cast to do their job. The thuddingly literal voiceover narration provided first by Claire and now by Jaime removes any ambiguity from their actions, and eliminates any audience investment in deciphering it. And it’s not as if the prose is so scintillating that the tradeoff is worth it, though without having read Diana Gabaldon’s source novels I don’t know where to lay the blame for that.

This tendency of the series to tell, not show, is most frequently — indeed, constantly — embodied in composer Bear McCreary’s uncharacteristically obvious score. Virtually every scene comes complete with a highland reel or a flute-based slow jam that tells you exactly how to feel about what you’re watching. And while I can’t fault McCreary for the Scots sound of the music, can you imagine how tedious it’ll get by the time we’re several seasons in? Unless you’re immersed in that culture from the jump, your ears simply can’t hear a broad emotional or tonal range in that music: “drinkin’ and dancin’ in the village,” “sad news about the crops,” “chasin’ bandits through the undergrowth,” and “time to take yer kilt off and lay the lassie down” are its only settings. The catastrophically inappropriate “Benny Hill with bagpipes” ditty that soundtracked Jamie’s spanking of Claire is only the most egregious example of the music’s mistakes. Unfortunately, there’s little indication that anything else on the show will play in tune anytime soon. 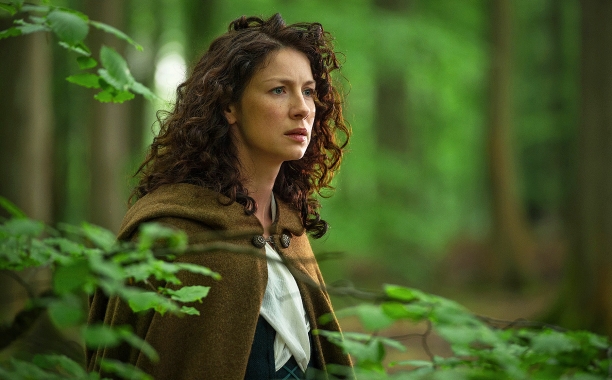