Tenants who rent out their units for short-term stays in violation of state law may want to pay particular attention to a recently filed lawsuit, in which United American Land sued an investment banker for renting out his rent-stabilized Tribeca apartment by the night.

The real estate development and management company alleges in a New York Supreme Court lawsuit that William Terry Krueger, the co-founder and senior managing partner at Nova Capital Partners and the other tenant of record, Adrienne Kennedy, were renting out Unit 5SW at 118-120 Duane Street between Broadway and Church Street on a nightly basis. The recent suit also names the subtenants, John Doe and Jane Doe, as defendants.

Mr. Krueger and Ms. Kennedy extended their lease on May 13, 2014 for a two-year period commencing September 1, 2014, at a monthly rent of $1,093.21, according to court documents. A month later, the defendants “began renting the premises to various individuals unknown to plaintiff and without plaintiff’s consent on a daily and/or short-term and transient basis,” the suit alleges. Ms. Kennedy is a member of Airbnb and since last June has allegedly listed the apartment on the website for a four-night minimum-stay. (On April 15, the listing wasn’t available on Airbnb.)

In 2010, the state of New York passed a law stipulating that residents in multi-unit buildings be prohibited from renting their permanent residential apartments for less than 30 days, unless the owner or primary tenant remained in the unit, with no more than two guests.

And enforcement of the law, which is mostly complaint-driven, has remained a primary concern of city politicians. The City Council has called for a $2 million funding increase for the Mayor’s Office of Special Enforcement, with the goal of hiring 25 additional staff. But such measures have not prevented people from listing thousands of potentially illegal units on sites like Airbnb, TripAdvisor, Craigslist and Vacation.com.

“As much as 72 percent of Airbnb reservations over the last several years violated New York law,” according to an October 2014 report, “Airbnb in the City,” by state Attorney General Eric Schneiderman. “Of the 35,354 private, short-term listings, data suggest that 25,532 of them violated either New York State’s Multiple Dwelling Law and/or New York City’s Administrative Code (zoning laws). Hosts generated approximately $304 million in revenue from these listings alone and, Airbnb itself earned almost $40 million from these transactions.”

According to short-stay rental advocates, besides flouting the law, Airbnb and other such websites negatively impact the affordable housing and hotel markets and cause safety issues in apartment buildings that are not properly equipped for transients.

Airbnb counters that it could collect as much as $65 million in New York City hotel occupancy taxes this year if the city and state would legalize the platform.

When contacted by the Observer, Airbnb issued the following statement: “Airbnb has helped countless families across New York make ends meet and pursue their dreams. We are eager to work with regulators to craft new rules that would stop bad actors and help regular New Yorkers pay their bills.”

United American’s attorney, Joseph Goldsmith, a partner with Kossoff, PLLC, told the Observer he filed and served an order to show cause “to prevent [the tenants] from illegally and dangerously renting out the apartment to transients in violation of the building and fire codes,” while the case is pending. That application will be heard in court on May 5. As for the case itself, the defendants have until April 28 to respond, Mr. Goldsmith said.

Attorney Jeffrey Yick, a partner with Tuttle Yick, is representing Mr. Krueger and Ms. Kennedy. He didn’t respond to requests for comment. Mr. Krueger wasn’t reachable for comment at his office.

Airbnb itself has stated it does not keep track of how many of its New York listings are illegal—and it would appear, in the United American suit, that “paying the bills” did not necessarily come into play: The landlord charges that “tourists and other transient visitors” are staying in the apartment at 118-120 Duane Street for “stays of less than 30 days at a rate of $290 to $450 per night.” If the defendants rented their apartment out every night of the year, they could make an annual profit of $92,731.48, the suit claims.

This is only the most recent case involving Airbnb. In February, a Manhattan Housing Court judge ruled a couple was to be evicted from its rent-stabilized penthouse at Related Companies’ 450 West 42nd Street after it advertised the unit on websites like Airbnb for triple the monthly rent of $6,670, The New York Post reported. This was the first ruling to evict a tenant under the city’s rent control code, according to the Post.

And last December, a Supreme Court justice ruled that the owner of 315 Central Park West, Brookford LLC, was able to temporarily restrain a resident from renting out rooms in her apartment via Airbnb pending further proceedings. The judge said that the tenant earned an average of $78,000 a year through renting out rooms. Her rent, meanwhile, was $4,477 per month. The case was disposed under seal.

Michael Pensabene of Rosenberg & Estis, who was one of the attorneys representing Brookford LLC at 315 Central Park West, said that an inadvertent loophole in the 2010 state law created “a carve-out for certain permitted occupancies within a household.” At issue is whether a short-term tenant “within a household is permitted under the multiple-dwelling law.”

“It’s not a sublet if you’re living there. It’s a sublet if you leave the apartment and someone else is there,” said attorney Janet Ray Kalson of tenant representative law firm Himmelstein McConnell Gribben Donoghue & Joseph.

Ms. Kalson, who is not involved in the United American case, said that many tenants are unaware of the laws when they list their homes or individual rooms for short-term lease.

“I think what happens with a lot of tenants is they don’t realize renting a room or their apartment on Airbnb is a problem and so they do it because they need money or whatever and the next thing you know there’s a lawsuit commenced against them by the landlord,” she said. The firm, she said, represents tenants who are unaware renting out their homes or rooms on Airbnb could jeopardize their tenancy as well as tenants who are having issues with their landlords renting out apartments in their building on a nightly basis.

While renting out a room with the primary tenant remaining at home may occur, more popular on short-term stay sites is residents ditching their digs when the short-term tenants arrive.

Duane Street is not the only Airbnb case the family behind United American, Albert, Jason and Jody Laboz, is dealing with, according to the plaintiff’s attorney.

At 78 Reade Street, which the Laboz clan owns under the name Aurora Associates, Mr. Goldsmith said he has served the requisite notice of eviction to a tenant who has allegedly been renting out two rooms in his 2,600-square-foot regulated apartment on a nightly basis on Airbnb—one for $130 a night and the other for $150 a night, the legal document indicates. Meanwhile, his current rent is $682.57 per month.

The tenant has until April 30 to be out of the apartment before further legal action will be taken. He has no attorney as of yet, Mr. Goldsmith said. As of April 15, the tenant’s listings were no longer available on Airbnb and the site didn’t include a way to contact the host.

Todd I. Nahins, a senior partner at Borah, Goldstein, Altschuler, Nahins & Goidel and who represented Related in the case at 450 West 42nd Street, said short-term leasing violations cases are not just limited to Manhattan.

“Within the last few months we have started to receive calls and commence litigation in different boroughs,” Mr. Nahins said, referring to Brooklyn and Queens. 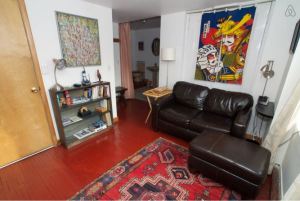 In the Prospect Lefferts Gardens neighborhood of Brooklyn, a judge ruled on April 1 against subletters of a rent-stabilized apartment at 535 Parkside Avenue. The court “finds that the respondents engaged in profiteering by renting out the apartment … to a series of short-term transient tenants for commercial purposes on Airbnb. Such brazen and commercial exploitation of a rent-stabilized apartment significantly undermines the purpose and integrity of the rent-stabilization law and code and is therefore incurable.”

One reason for the outer-borough legal activity, Mr. Nahins said, is that landlords are being more proactive about uncovering residents renting out their units on a short-term basis as “landlords now can be fined if the situation is discovered by the city.”

The city issued a total of 597 such violations in 2014, according to data from the city. Those fines vary depending on whether the unit is a co-op, condo or rental; whether it is the first violation issued and what violations are actually issued like inadequate egress or illegal occupancy. In October 2012, the City Council enacted legislation increasing fines for illegal short-term rentals. Fines generally range from $3,200 to $8,000 for a single first violation.

But Manhattan is still where tourists can find the majority of such listings. In fact, Mr. Schneiderman’s October 2014 investigation showed that postings in “Greenwich Village/Soho, Chelsea/Hell’s Kitchen and Lower East Side/Chinatown,” accounted for more than 40 percent of hosts’ revenue, or about $187 million. By contrast, all reservations in Queens, the Bronx and Staten Island combined brought in $12 million, less than 3 percent of the New York City total.