Vito Schanbel has a long and well-documented relationship with the semi-anonymous art world pranksters-turned-kingpins of the Bruce High Quality Foundation. The son of Julian, who’s been a art world figure in his own right since starting to deal at the age of 16, met the collective at Kennedy airport at 2003, after Mr. Schnabel asked them to buy him a bottle of champagne, because he was at the time underage. If that’s not a classic meet-cute, I don’t know what is. 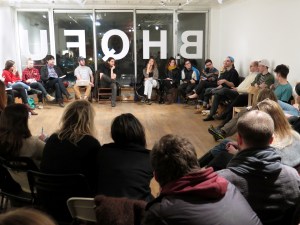 Since not long after he reached legal drinking age, Vito Schnabel and a few other downtown luminaries have served on the host committee for the BHQF annual benefit, and even in this glut of galas, it’s been one that stands out from other ticketed spectacles. This year will be no different, as Vito’s convinced father Schnabel to let the Bruce kids have their way with his prized piece of real estate, that pink birthday cake of a house plopped on the roof of a West Village apartment building, Palazzo Chupi. It all goes down April 28, and there will be cocktails, dinner, speeches, an auction with an impressive slate, all of that.

SchanbeI the elder doesn’t rent out his place for events all too often. There was a big bash for Ferragamo a few years back, but one knows of the painter’s weak spot for models. The apple doesn’t fall far from the tree in that regard. And, after all, Vito still lives there, too, so he must have some say in the matter.