Menendez, a U.S. Senator, and Salomon Melgen, a Florida ophthalmologist, were indicted today in connection with a bribery scheme in which Menendez allegedly accepted gifts from Melgen in exchange for using the power of his Senate office to benefit Melgen’s financial and personal interests, announced Assistant Attorney General Leslie R. Caldwell of the Justice Department’s Criminal Division and Special Agent in Charge Richard M. Frankel of the FBI’s Newark, New Jersey, Division.

“Government corruption – at any level of elected office – corrodes the public trust and weakens our democratic system,” said Assistant Attorney General Caldwell.  “It is the fundamental responsibility of the Department of Justice to hold public officials accountable by conducting thorough investigations and seeking an indictment when the facts and the law support it.”

“The job of an elected official is to serve the people,” said Special Agent in Charge Frankel.  “The citizens of New Jersey have the right to demand honest, unbiased service and representation from their elected officials at all levels of government.  The charges and activity alleged in this indictment are another example of the FBI’s commitment to aggressively and tenaciously pursue public corruption in the state of New Jersey.”

Menendez, 61, of Union City, and Melgen, 61, of West Palm Beach, Florida, were indicted in the District of New Jersey for one count of conspiracy, one count of violating the travel act, eight counts of bribery and three counts of honest services fraud.  Menendez was also charged with one count of making false statements.

According to allegations in the indictment, between January 2006 and January 2013, Menendez accepted close to $1 million worth of lavish gifts and campaign contributions from Melgen in exchange for using the power of his Senate office to influence the outcome of ongoing contractual and Medicare billing disputes worth tens of millions of dollars to Melgen and to support the visa applications of several of Melgen’s girlfriends.

Specifically, the indictment alleges that, among other gifts, Menendez accepted flights on Melgen’s private jet, a first-class commercial flight and a flight on a chartered jet; numerous vacations at Melgen’s Caribbean villa in the Dominican Republic and at a hotel room in Paris; and $40,000 in contributions to his legal defense fund and over $750,000 in campaign contributions.  Menendez never disclosed any of the reportable gifts that he received from Melgen on his financial disclosure forms.

According to allegations in the indictment, during this same time period, Menendez allegedly engaged in three efforts to use his Senate office and staff to advocate on behalf of Melgen’s personal and financial interests.  First, Menendez allegedly pressured executive agencies in connection with a conflict between Melgen and the government of the Dominican Republic relating to a disputed contract that Melgen purchased to provide exclusive screening of containers coming through Dominican ports.  Second, Menendez allegedly advocated on behalf of Melgen in connection with a Medicare billing dispute worth approximately $8.9 million to Melgen.  Third, Menendez allegedly took active steps to support the tourist and student visa applications of three of Melgen’s girlfriends, as well as the visa application of the younger sister of one of Melgen’s girlfriends.  Throughout these efforts, Menendez allegedly engaged in advocacy for Melgen all the way up to the highest levels of the U.S. government, including meeting with a U.S. cabinet secretary, contacting a U.S. Ambassador, meeting with the heads of executive agencies and other senior executive officials and soliciting other U.S. Senators, all in order to assist Melgen’s personal and pecuniary interests.

The charges contained in an indictment are merely accusations, and a defendant is presumed innocent unless and until proven guilty.

The case is being investigated by the FBI.  The case is being prosecuted by Deputy Chiefs Peter Koski and J.P. Cooney, and Trial Attorney Monique Abrishami of the Criminal Division’s Public Integrity Section. 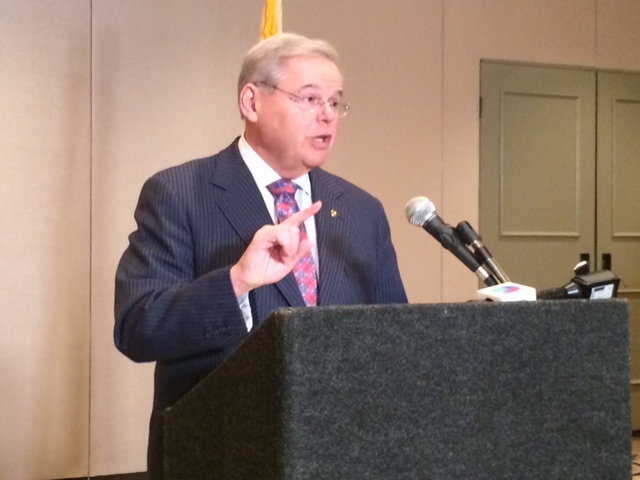