A day before Hillary Clinton is widely reported to be announcing her bid for president of the United States, elected officials and supporters from the independent PAC that has been urging her to run gathered to celebrate what they considered something of a victory.

“Our goal was to encourage her to run, so we’re ecstatic today—she’s running,” Congresswoman Carolyn Maloney said, before adding a bit of attribution: “So the press tells us.”

Ms. Maloney was among a slew of lawmakers who turned out to praise the former Secretary of State, U.S. Senator and first lady a day before multiple news outlets have reported that Ms. Clinton will officially launch her campaign with a video shared on social media. The gathering at SouthWest NY, a bar near Battery Park, was held just miles from where Ms. Clinton’s campaign will be headquartered in downtown Brooklyn.

Among those in attendance was Assemblywoman Jo Anne Simon, in whose district Ms. Clinton’s offices will stand on a well-named intersection.

“It’s perfect because she’s right there at Tillary and Clinton, right? You couldn’t find a better, more alliterative place to be,” Ms. Simon said.

Ms. Maloney was among the first elected officials to jump aboard the Ready for Hillary bandwagon—and its bus, which included a famous photo of Ms. Clinton wearing sunglasses and using her Blackberry—and held her first event for the group two years ago. The PAC, which was not formally connected with Ms. Clinton, has rounded up more than 4 million supporters, and is expected to see much of its staff and resources depart to Ms. Clinton’s campaign, once the campaign exists.

The elected officials who turned out to support Ms. Clinton’s bid returned to several themes in their remark: her experience, her trailblazing status as a woman, and what they said was an understanding of the middle class.

“She’s been at all the tables: the peace table, the international table, the domestic table, and the kitchen table, and she understands the concerns of working Americans, and she has a track record to run on,” Ms. Maloney said.

Both Assemblyman Keith Wright and State Senator Adriano Espaillat dropped the word “herstory”—the female version of history—in their comments. Mr. Espaillat ticked off Ms. Clinton’s achievements—lawyer, senator, secretary of state—and noted that on the other side of the aisle, Republicans would look to speak in Spanish to voters.

Assemblyman Michael Blake at one time worked against Ms. Clinton—recalling his time working on now-President Barack Obama’s campaign in Iowa in 2007. But, years later, he’s now rooting for Hillary, and noted other Obama for America alumni were in the room with him.

Some of the supporters in the room had also been active in Ms. Clinton’s failed 2008 bid. Nancy Chambers, 71, wore a shirt with the name “Hillary” embroidered on it, festooned with buttons from the 2008 bid including one that read “Listen to women for a change.”

Sure, Ms. Clinton invites plenty of opposition—but Ms. Chambers said she could rise above it.

“The haters gotta hate,” she said. “But she can deal with it.” 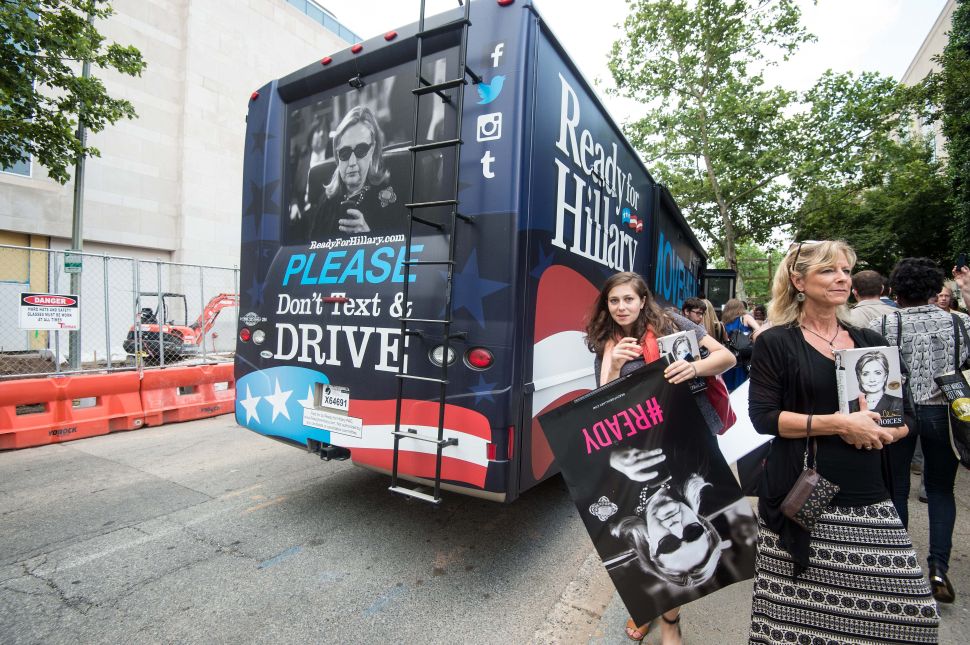