The show took five weeks off, so by the time the show resumes, the only plot point fresh in my mind is the fact that Francis is suffering from the ear infection that presumably puts him on his deathbed.  Bash, by all accounts should have been on his deathbed since he was gored with a spear, but Delphine the nun/pagan worked some of her black magic and now Bash has to take someone’s life in order to save the life of his dying brother. It all sounds all very Friday the 13th: The Series in the sense that a spell is invoked at the cost of a life. Anyway, Francis is nearly dead of an ear infection while Bash survives a pointed spear penetrating clear through his torso in the 16th century where the best treatments modern medicine could provide were leeches and theories about humors. Nothing like a good spell to completely make me lost the ability to suspend disbelief for this show.

As for Mary, “Reversal of Fortune” opens with her in a post-coital glow with Conde and promising to run off to Scotland with him. Because we’ve all seen TV before, the fact that their happy and making ironclad vows means that they are not going to end up in Scotland. Obviously, history dictates that Mary will inevitably end up in Scotland, but given how we’ve endured countless episodes of  talk of a Scotland exodus without actually seeing Scotland, leaving the audience to  experience acute Scotland fatigue. At this point, Scotland sounds about as real a destination as Xanadu or Atlantis.The couple’s loving glow is cut short by news from Lola about Francis’ ill health. And that’s all Lola gets to do this episode.  Bye, Lola!

Mary shows up to Francis’ bedside and Catherine is there ready to read her for filth. Plus, it doesn’t take a genius to figure out that Mary just rolled out of her filthy adultery bed and essentially blames Francis’ ill health on Mary’s infidelity. Cause, you, know, broken hearts cause ear infections.

As if things weren’t precarious enough for Mary, what with her husband in a coma, her homeland is under attack by Protestant rebels. At this point, Mary already had sex with another dude while her husband was deathly ill, she might as well steal some of his troops to deploy to Scotland while he’s incapacitated. After all, while Francis is out cold, Mary is essentially king for a day. However, in a move I don’t entirely understand, if Francis dies, the throne apparently reverts back to Catherine? I don’t get how succession of the throne works, but then again, history is full of people who tried to contest the rightful heir to a throne. So, she has to make the most of occupying the throne unchallenged. Unfortunately for her, Catherine swoops in and puts the kibosh on Mary weakening France’s defenses by sending the army off to Scotland. This forces Mary to pull a total boss bitch move and threaten Narcisse into calling on a private army led by General Renaud.

We are introduced to the general via a meet cute with Kenna when she tries to steal a horse after she her carriage rider keels over and dies while driving in an immensely .gif-able moment. Renault is utterly charmed by the fact that Kenna is trying to make off with his horse which is great for her because horse theft was definitely a hangable offense in some eras. Anyway, given the palpable chemistry between the two, it looks like we’re getting set up for another love triangle because this show is nothing but musical chairs, except with sex partners instead of chairs. Plus, it would be nice to see Bash actual emerge victorious from a love triangle, instead of constantly getting the shaft.

Fortunately, Bash has been given something else to do besides chase ghosts and be jilted. Unfortunately, that thing is murdering Clarissa, Catherine’s daughter from season 1 that we all thought was a ghost. Hi,Clarissa! Bye, Clarissa! Honestly, I didn’t know that the noble (almost to a fault) Bash had this in him, but it was a necessary evil to keep his brother alive.

So, yes, Francis is alive (for now). He emerges from his coma and gives Mary the troops she needs to defend Scotland as a final favor before making it clear that the final favor he’ll ever do for her. It sounds like Francis is finally washing his hands of her and doesn’t really care if she shuttles off to either hell or Scotland, whichever is closer. Mary figures that she might as well piss off every man in her life, so she sends Narcisse to the dungeon for delaying Renaud’s troops for a few days and then backs out of her plan with Conde to run away to Scotland, thus sending him into a furniture-breaking rage. Plus, there’s the fact that Catherine hates Mary more than usual. Congratulations, Mary, you’ve screwed yourself out of every possible ally at a time when you couldn’t need them more. Golf claps all around.

As for Greer, she’s having a blast getting the best little whorehouse in France set up, in case you were worried that nobody on this show is having a good time. Although she’s satisfied with being able to support herself, Leith still thinks he’s going to get her marriage to Castleroy annulled by acting as a leg-breaker for a cardinal.  We’re treated to one of the least convincing shakedowns ever committed to film. He’s also charged with chaperoning Claude who doesn’t seem to be aware or concerned that her brother is dying. Also, if the writers are setting her up to be a competing love interest for Leith, then I’m going to need to seek medical attention for love triangle fatigue. 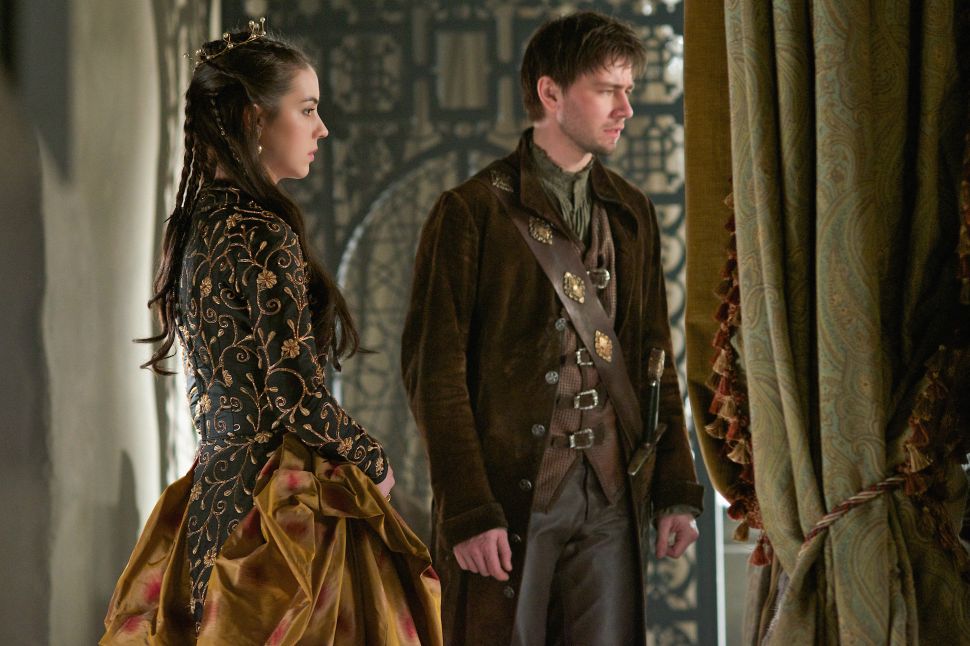