For a woman who has fallen out of favor with French Court and is supposedly disgraced, Greer is having the best time out of anyone on the show. Everyone else is entangled in arduous love triangle parallelogram while Greer is living it up in her stately brothel and getting rich while the prostitutes in her employ actually do all the dirty work of servicing the men and she always has champagne at the ready. Being a madam is infinitely better than being the Queen of France and Scotland. Each night is a nonstop party with well-behaved customers and sex workers who take great pride in their work and are generally happy to be there. Girlfriends are doing it for themselves.

Every else is tied up in their own fruitless love lives, assuming that they aren’t trying to avoid getting beheaded or solve a hostage situation perpetrated by radical Protestants.  Catherine began a scorching and conniving affair with Narcisse only to have a spy report to her that he witnessed a suspect flirtation with Lola. Kenna is still getting the cold shoulder from Bash, so she’s making puppy eyes at General Renaude. Francis is still fuming at Mary who is still carrying on her not at all secret affair with Conde, while Conde sneaks off to marry a proxy of Queen Elizabeth only to have any evidence of the marriage literally go up in flames while he’s trying to flee the country, causing Elizabeth’s envoy to disavow him entirely. Oh, but hey, there’s enough evidence for French court to know that he committed treason by aligning with Elizabeth. Congratulations, Conde, your love triangle is far and away the most lethal. Wonderful decisions all around.

However, the marriage to Elizabeth is just one aspect of the treasonous shitstorm Conde’s life has become. During one of their sexy time trysts, Catherine and Narcisse plotted to have the dead bodies of two of Conde’s men planted in the choir boy hostage situation, thus making him look like he’s conspiring to overthrow the Catholic regime. Conde easily possesses the handsomest face to ever grace a chopping block.  Anyway, the child hostages are essentially a church full of MacGuffins designed to frame Conde, make Renaude look opportunistic by placing priority on saving the rich kids, and give Bash something to do by being heroic, when his ambiguous relationship with Delphine the witchy nun isn’t being speculated upon by Kenna and Renault.

In the interminable Conde/Mary/Francis black hole, the writers make the curious and regrettable choice of explaining Mary’s rape as the catalyst for her attraction to Conde and the incident that snuffed out her attraction to Francis. Ugh. That problematic exchange aside, there’s finally some definitive movement on that front, since Conde can’t rely on Mary to protect him in the face of Narcisse and Catherine’s treason set-up, so he takes the quickie marriage to Elizabeth via her stunt double. Any student of history knows that marriage is totally off brand for Elizabeth, so this is resolved by the obviously intentional fire that kills the poor proxy and most of the evidence that the marriage even took place. Of course, the sword that separated Conde and the proxy while they slept is left behind, leaving just enough of a clue for everyone at Court to discover that Conde aligned with England in record time. As much as Catherine and Narcisse would love to take credit for the fire, they weren’t responsible.  If Francis wasn’t furious enough at Mary before, now he’s consumed with a white hot hatred since Conde’s marriage established a French foothold for England and threatened his reign in the process. What he doesn’t know is that Conde is abandoned in the woods without a goddamn friend in the world. Sure, things don’t look good for the handsome blood prince, but at least it’s some movement away from the constant talk of an imaginary love nest in Scotland with Mary. Plus, loving Mary just seems toxic. His love for Mary all but signed Conde’s death warrant and Francis is going to spend his laugh days on the planet fuming over her before he eventually drops dead after bleeding out of all his face holes. Maybe Renaude has the right idea by hanging out in whorehouses. Maybe everyone should just hang out in the whorehouse. There’s free flowing champagne and a constant party, kind of like how Court used to be a constant party before Mary and Conde’s affair brought about the constant threat of looming doom. 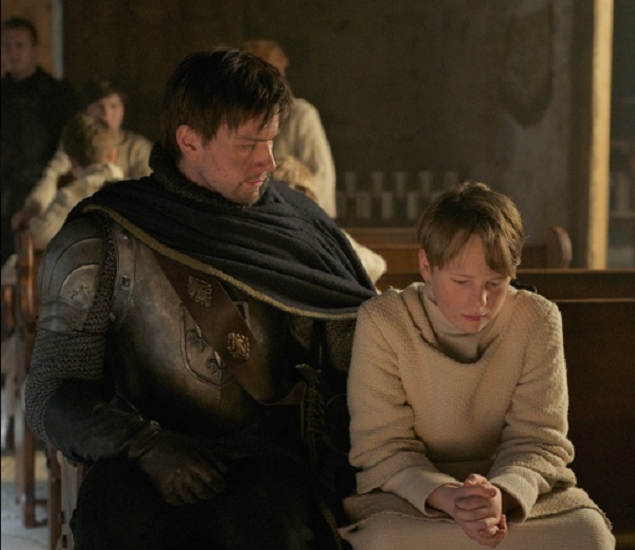