If you feel left out of the whole Twin Peaks phenomenon, we’re here to help! Every week, associate tvDownload editor Vinnie Mancuso attempts to figure out what the hell is going on in this town, while senior editor/Twin Peaks expert Drew Grant answers his questions. This week: ‘Dispute Between Brothers.’

So before we get to the recap, I think we need to address the real mystery plaguing the town of Twin Peaks…when are Agent Cooper and Sheriff Truman going to kiss already?

But like, seriously. This episode sees Cooper making his goodbyes because apparently “Oh the murder demon is just wandering the woods now,” is a satisfying conclusion to an FBI investigation. Maybe call in a priest or something? Anyway, Coop makes some last minute plans to do some night fishing with Major Briggs before he leaves. As a parting gift, Truman bestows some sort of skunk-flavored fishing lore on Cooper. Naturally, he delivers this gift about six inches from Cooper’s face, delivering this speech:

“Now, when those steelheads are running upstream, they are only thinking about one thing — sex. A green-butt skunk breaks their concentration. [deep, sensual sigh] Yeah. Tied it myself.”

That’s….got to be metaphor? Maybe Truman is the fish and Cooper is the skunk, or, oh man is Cooper the stream? I don’t know. All I know is that between Donna and James, Big Ed and Nadine, Bobby and Shelly or whoever it may be, the only couple in Twin Peaks that really has any sort of realistic chemistry is Cooper and Truman. Rooting for you kids!

Honestly, Cooper could really use some love in his life, because he just has the roughest day. He starts it off with rebuffing some good old fashioned underage sex from Aubrey, because in the past a woman died because he loved her. And if that description of the situation sounds vague, well here’s Cooper’s explanation: “I was badly injured, and my partner lost his mind. You need to hear any more?” Uh, yes actually. I need to hear a lot more than that. Can you imagine if the guy who sits next to you at the office, let’s call him Bill, wasn’t in work today and you asked about his whereabouts, and someone’s response was “Oh, I’m badly injured and Bill lost his mind. You need to hear any more?”

And just when Cooper thought he was out, just when he made his final goodbyes to Hawk, Andy and Lucy, who would show up but THESE PEOPLE:

The guy on the left is from FBI Internal Affairs, the guy on the right is from, uh, Canada in case you couldn’t tell. They’re in town to suspend Cooper, without pay, because Cooper crossed the border into Canada without permission a bunch of times. He did this, mind you, to save multiple people’s lives and solve multiple cases that no one else could solve but still, Canada is fucking pissed. Chubby Muhammad Ali and the Mountie up there are doing a full investigation into Cooper’s misfeasance. Misfeasance! I learned a word today.

Also, the FBI agent refers to the guy from Canada as Mountie King, which on one hand probably means he’s a mountie with the last name King. But on the other hand I like to think he meant THE Mountie King, king of all mounties, ruler of all silly hats. You decided which one you want to go with.

Oh, and the Mountie King might be evil? He’s supposed to be in the midst of a sting operation at One-Eyed Jack’s, but he’s pretty clearly working with Jean Renault at the end of the episode to set up Cooper. So three options: Option A) he is simply too deep into his sting operation to resist, which is unlikely because The Mountie King takes intimidation from no man, Option B) He’s just secretly evil, a very Twin Peaks thing to happen, or Option C) he’s really, really shitty at sting operations. Why is he still there? I’m pretty sure I could gather enough evidence to send everyone at One-Eyed Jacks to jail after, like, an hour of being there.

Elsewhere, Twin Peaks High School shows a distinct lack of judgement and good sense by allowing a 35-year old Nadine to enroll in the school and try out for the cheerleading because a psychiatrist and a gas station attendant said so. Turns out Nadine is pretty fantastic at cheerleader tumbling though, so at least we got a chance at nationals this year!

Yeah so, on that note, have I mentioned how there’s officially nothing of importance happening on this show anymore?

A wake is thrown for Leland, where no one is particularly sad but the spread is spectacular. James completes his transformation into a sad puppy by running away from town. Norma, a character whose name I have to look up every time because I just do not care, finds out the mysterious food critic M.T Wentz was her mother the whole time, and her mother gave her shitty restaurant a shitty review. After Norma freaks out on her mother, very much so making her a part of Norma’s business, Norma has this to say: “Maybe I am overreacting. But they’re my reactions. And the hurt I feel is my hurt, and how I react is none of your damn business.”

That makes no sense, Norma! 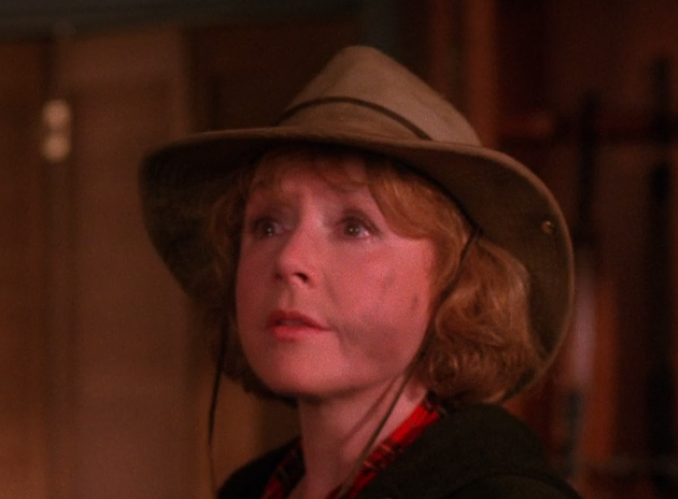 Finally, in the last scene something happens, and when I say “something” I mean this show just becomes The X-Files for about five minutes.

Cooper and Major Briggs are out in the woods, having a casual chat about BOB (why is everyone so casual about BOB?!) when Cooper excuses himself to go take urinate in the open air, apparently one of his favorite things to do. Suddenly, a flash of light cuts through the trees and FBI Agent Dale Cooper rushes into it just in time to see a mysterious figure. 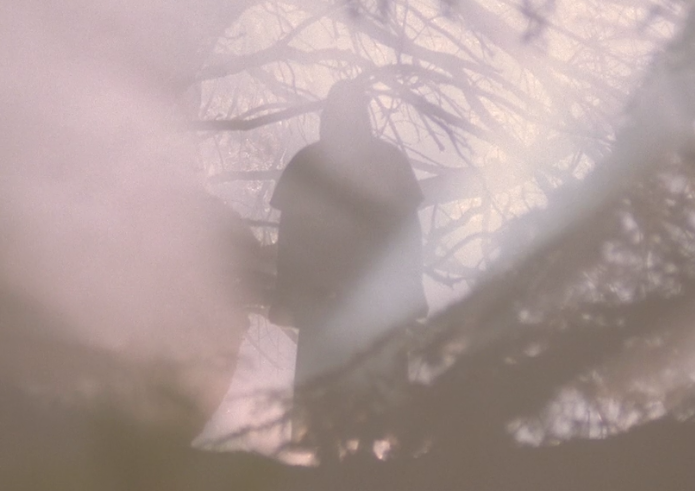 Then the light and the figure disappear, apparently taking Major Briggs with it. Was it BOB? Aliens? An interesting story line?! Please, Twin Peaks. I want to believe.

What are your thoughts and/or best fanfiction on the Cooper and Truman romance?

Oh come on, Vinnie. This the Drew equivalent of : “I’m badly injured and my partner lost his mind. You need to know anymore?” As in, I know a TON of slash fiction about the BookHouse Boys, but I’m not sure you actually want to know about it. Oh well, a box, once opened, can never be completely closed….is something Dale would find mysteriously etched from the steam in his bathroom mirror.

Here’s a PG-Rated fanfic I’m particular to, “Once and Future King,” by cjmarlowe. Not heavy on the action, but it gets that sparkling undercurrent of sexuality completely right.

Cooper closed the folder and patted the top of it, staring at the back of his hand. “The time has come, Harry,” he said finally. “And it’s been a long time coming.”

Cooper held up a hand to him. “Thanks, Harry, but I have all the company I need. But here’s a promise — I’ll check in with you here at the station on our return.”

“Then you know where to come looking.”

Truman nodded and Cooper put the folder in his briefcase, latched it and hauled it off the conference table.

“The kind of love that Albert wields is not the kind you can find just anywhere, Harry. I wouldn’t be here without him.”

“You told me some of it in your letter.”

“–and Albert has seen me through all of it, Harry. He’s a fine man.”

Fighting his way back to himself from inside an endless red room, remembering everything he’d done in the meantime, when there had been a heavy weight blacking his soul, learning to live with that in the year following. The lingering darkness.

“It should surprise me, but it doesn’t. Whatever floats your boat, Coop.”

Haha, Coop and Albert. As if.

Is (THE) Mountie King an important part of this show going forward? Oh, please say yes.

Sure. I don’t know. Maybe? The thing to remember is that NOTHING is an important part of this show, going forward. Not Audrey’s love affairs, not Cooper’s new mystery, not Ben’s weird…well, you’ll see. Not even the cameos of famous actors before they were famous can make up for the fact that nothing in the rest of this season–barring the final episode, and where Jose finally ends up–means anything. It’s all a bunch of nonsense that I would write on Ambien. (Speaking of which: Apparently I took some the other night and wrote two characters named “Cheryl Crow Conviction” and “Creek McGraw.” David Lynch, plz hire me, ASAP!)

Did this episode air before or after the X-Files was even a thing? Because I’ll look pretty stupid if Twin Peaks came first.

Twin Peaks came first. But I will say that one of the celebrity cameos put the two worlds in temporal order and make it so the shows exist in (at least in my mind) some sort of greater canon.

Just save me some time and tell me who the guy in the woods with the light is. Please? 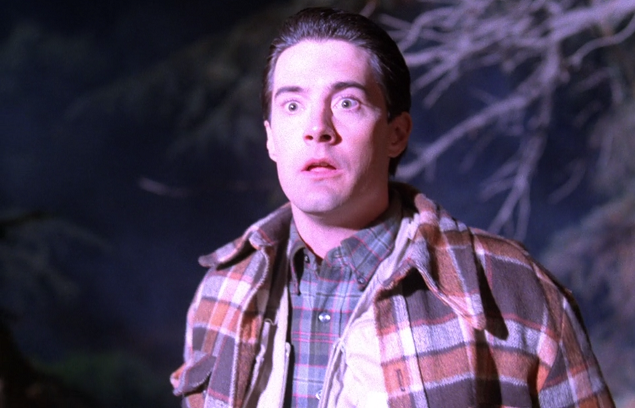