If you feel left out of the whole Twin Peaks phenomenon, we’re here to help! Every week, associate tvDownload editor Vinnie Mancuso attempts to figure out what the hell is going on in this town, while senior editor/Twin Peaks expert Drew Grant answers his questions. This week: 2×11; ‘Masked Ball.’

Why did no one tell me about this?! 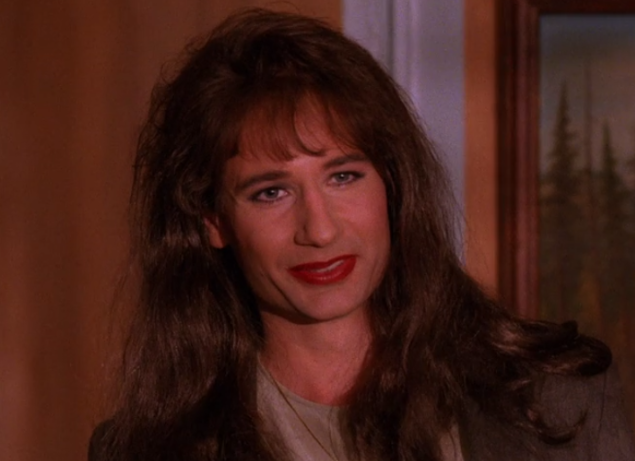 This is weird for two reasons. The first reason is that I JUST finished binge-watching the entirety of Californication, which is in no way a good show, but it’s great to have in the background when you’re doing something else, not paying attention, and/or just don’t actually want to watch TV.

But it’s really weird because the fact that David Duchovny shows up as a transgender FBI Agent is literally the one plot point I had no idea happened. Yes, I never knew details, but I did know a bare outline. I knew that eventually there’s a silver haired guy, and a dwarf, and a lodge and a guy that likes chess. But never in my short life, since this episode first aired 25 YEARS AGO did I ever find out that this happened. How is that possible? How did no one tell me this? Have I NEVER been to David Duchovny’s IMDB page? This is so amazing. Denise is the best. Is Twin Peaks turning a corner?

The answer, PEAKS FANS, is no. Mid-second season Twin Peaks is still sort of awful, and not even in an endearing way. Just in a “oh my God is Josie in another scene?” kind of way. So let’s start with the only thing that I’ve ever found comfort in while watching Twin Peaks. The one thing I know will always be there for me.

I thought I enjoyed season one James, but season two James is on a whole ‘nother level. It’s like his character was created in a laboratory somewhere, designed specifically for the purpose of me coming along two decades later to make fun of him. It’s amazing. First things first, look at the picture up there. Come on. Stop. Go home, James. You’re like 16.

“I guess I’m not so interested in how my bike looks but where it can take me.” Evelyn asks where he wants to go. “It’s not really a place it’s a feeling.”

“Sometimes, riding at night, I punch off the headlights and roll on the throttle and just rocket blind into the dark.”

HAHA. Never, ever change James. I’m surprised there was never a James spin-off titled, like, “UH DERP” or something. I would’ve watched that. I would’ve written Revisiting UH DERP every week.

There’s an appearance this episode from the voice of Gordon Cole, played by David Lynch, who offers some sage advice to Cooper like “Let a smile be your umbrella,” and “These are hard times, but we get through them.” True, unless Showtime isn’t giving you enough money to complete your genius vision. Besides that, yes, we get through tough times.

Nadine story line update: When I was in high school, if someone over the age of 30 walked in without an ID we went into fucking lockdown. We did not offer them a place on the wrestling team. Just saying.

If you mashed up all the annoyance I have towards how much time they’re spending on the Deputy Andy and Dick Tremayne stuff, and mixed it together with how dumb that stuff actually is, what you would get is an amalgam of all the worst, awful qualities of 90s television. Let’s call it…Andy Dick.

Somewhere among this mess, Cooper gets another message from Windom Earle, whoever the hell that is. He get’s a letter that says simply “P to Q4,” because they’re apparently playing a game of long distance chess, which is something I think my grandfather actually does. Also, there’s a recording filled with CHESS RELATED THREATS. Or, honestly, it might just be CHESS RELATED TALKING. I don’t know much about chess, or Windom Earle. So far, there’s a chance he just really likes chess.

So this entire episode is based around this huge wedding that’s happening at the Great Northern, and, honestly, can I be honest, honestly? I don’t know who half these people at this wedding are. I don’t know the old dude getting married, I don’t know the young girl he’s getting married to, I have no idea who the other old dude who interrupted the wedding is. I know we’ve met them before but, jeez can you blame me? There’s like three interesting characters at this point and about 5,000 uninteresting ones. Some are going to slip through the cracks.

There were some great moments though, like when everyone is having fun on the dance-floor, and Sheriff Truman is just off to the side alone, watching with this terrifying smile on his face. 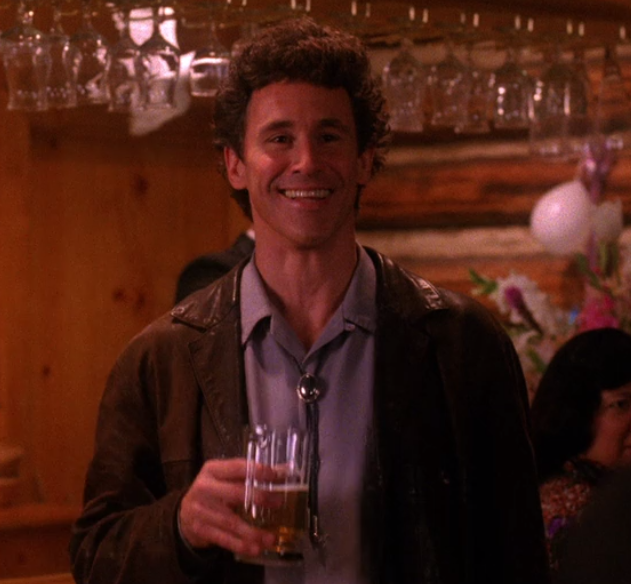 Also, at some point the new groom brings his much younger bride over to Truman and says “Sheriff, arrest this woman. She’s too beautiful to be living in this state.” I really wish Truman had just shrugged, violently thrown some handcuffs on her, and led her away to finish the episode.

But that didn’t happen. What did happen is we get a scene were Catherine makes Josie her slave, basically. Catherine already spent seven episodes dressed as a deeply offensive Asian stereotype. I think Catherine has some deep-seeded issues she needs to address. Oh, also, turns out Catherine’s brother and Josie’s ex-husband is still alive, but OH MY GOD who cares?

Is there actually something topical to say about how we live in a much more tolerant, post-Transparent world, after watching how everyone reacts to Denise like “EW WHAT?” Deputy Hawk won’t even shake her hand!

Well, we all work within the socially acceptable parameters of our times. Denise was so perfect because she wasn’t a punchline. It wasn’t this drag performance in line with Rocky Horror or how a lot of people considered transvestitism to include both men who liked to dress as woman and people who are trans: that is to say, born into the wrong-gendered body.

Now here’s a strong, confident woman who discovered her true self while going undercover as a woman during a sting operation. She’s not so literal-minded as Cooper…she literally gender-bends. Denise is just so comfortable in her own skin that I think it works for modern day audience. She’s not gone hold them back: he’s not the focus point, and it’s so much better of  a portrayal of a trans person than Stephen Webber on The Comedians, which came out this month and not like, decades ago.Lynch treats Denise as a fully-formed character, no more or less quirky than anyone else on the show. Everything on Twin Peaks has their “thing.” Denise’s was being born into the wrong body…a Lynchian concept if I ever heard one.

Were you confused  when I asked that X-Files question last week, having no idea David Duchovny was on this show?

No, but how fun is the fan fiction to imagine that because of Denise’s cross-dressing, she was buried in the back of bureau and forced to perform as male–J Edgar Hoover-style–which is how we got Mulder.

Do you think David Lynch will return to the Twin Peaks reboot??

The question is: would you watch it? 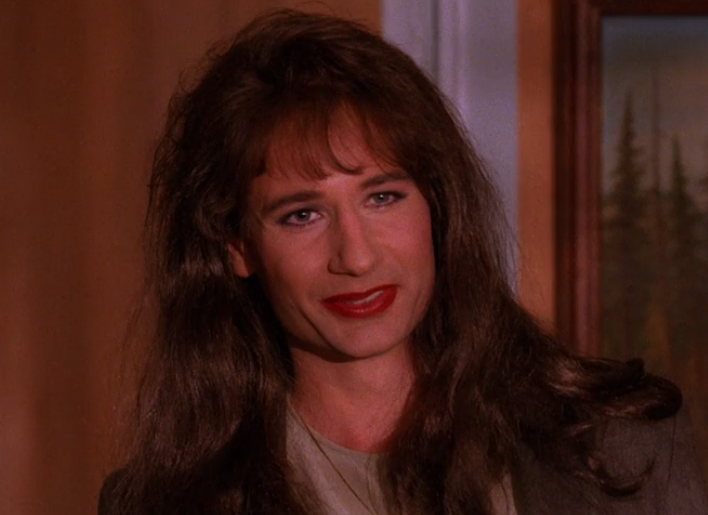