From Romania, of all places, comes a breath of fresh air, far above the usual action film Hollywood keeps churning out with pointless abandon. Closer to the Moon, filmed in English with a wonderful cast of American and British actors headed by Vera Farmiga and the great London stage star Mark Strong, is a unique and unbelievable yet totally true footnote to history set in 1959 Bucharest about five intellectual Communist Jews who form a gang during a New Year’s Eve party in a whorehouse to rob the National Bank of enough money to send thousands of Jews to Israel. You don’t get a plot like that every day.

Written and directed by Nae Caranfil, a filmmaker worth keeping an eye on, the movie is so fascinating and entertaining that you can enjoy it even if you know nothing about postwar Romania under the Soviets, but a wisp of historical background might help. Many Jews who joined the anti-Nazi resistance during World War II naively believed freedom from tyranny and oppression would arrive once the Russians were in power. Instead, the Red Army enslaved all of Eastern Europe.

The director wastes no time with statistics or newspaper reports, but jumps right into the heist, pulled off by a quintet of heroes, all longtime Communist card carriers and resistance survivors who highjack a bank van by posing as a film crew shooting an action flick: Max, a chief police inspector (Mark Strong) who treasonously acts as group leader; Alice (Vera Farmiga), a political scientist, Max’s ex-lover and the mother of his son; Yorgu (Christian McKay), a history professor; Razvan (Joe Armstrong), a fiery reporter; and Dumi (Tim Plester) a much admired space scientist who covers the space program on TV. You don’t actually see the robbery until it is reenacted later in the film, but you see the excitement of gunfire and police sirens through the eyes of a young waiter who is besotted with American movies in a pub across the street.

Virgil (Harry Lloyd, from the TV series Game of Thrones) witnesses the whole thing, thinking he’s watching the making of the first Romanian action film, and it inspires him to seek a career as a cameraman. When the disillusioned gang is caught, convicted and sentenced by a kangaroo court to die by firing squad, it is Virgil who lands a job as assistant cameraman on an anti-Semitic documentary ordered by the secret police as Stalinist propaganda. Every day the five prisoners are dragged from the jail to the movie set where they report to makeup and wardrobe to get elegantly prepared for the camera. Still clinging to their sense of humor, they treat the whole experience as a comedy of errors in the name of authenticity. In the restaurant scene, they demand caviar and Chateaubriand washed down with expensive wines, while the young, impressionable Virgil becomes more infatuated, smuggling their mail and phoning personal messages to their families, and falling in love with the brave, bohemian Alice. With the real cinematographer stoned on vodka, Max takes charge of most of the filming and Virgil gets to choose his own camera angles.

Closer to the Moon collects too much clutter when the movie within the movie tries to rewrite history, juxtaposing its own Communist-dictated version of the crime that clashes with actual memories of the participants, told through flashbacks. How the remarkable story all turns out will inspire mixed feelings of happiness and tragedy. But as it unfolds, you get the plans and motivations of every member of the quintet, along with the brilliantly executed heist itself, which, as Alice reveals, happened the day the Soviet rocket Luna 2 crashed, becoming the first space craft on the moon. It’s a metaphorical stretch for a simple movie title, but never mind. Closer to the Moon still manages to be a strange blend of history, black humor and art. 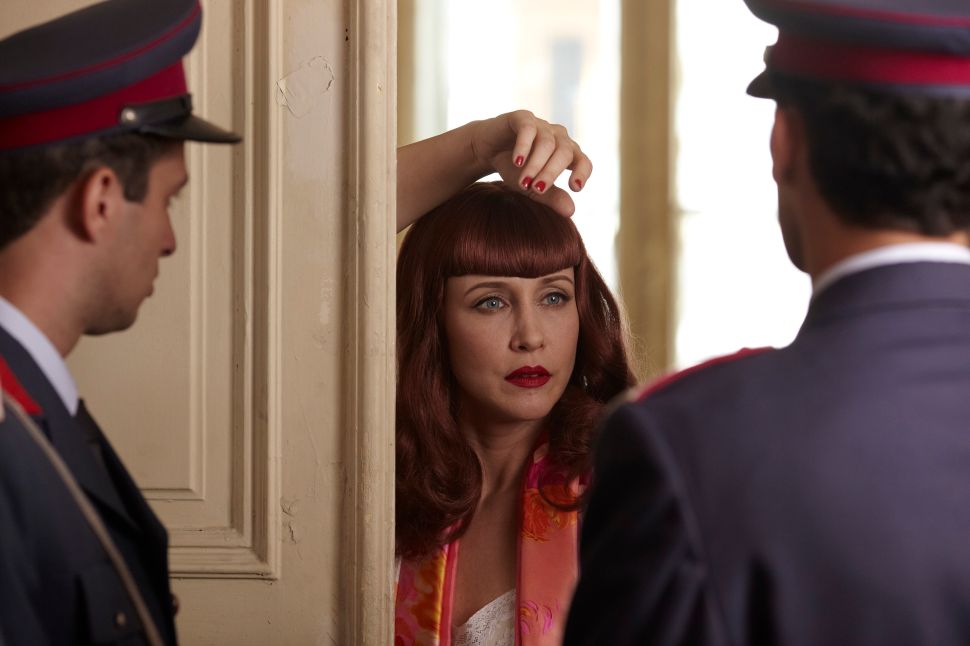 Filed Under: Movies, Reviews, movies, closer to the moon