Former Mayor Rudolph Giuliani will headline a $25-a-plate “Road to Victory” breakfast on April 25 for Staten Island District Attorney Daniel Donovan, the Republican candidate for Congress in the district covering the borough and parts of Brooklyn.

Mr. Donovan’s campaign blasted the email invitation to supporters under the subject line “JOIN US APRIL 25th for EVENT: Donovan & Giuliani.” The breakfast will be held from 10 am until noon at the Above Rooftop Lounge at the Hilton Garden Inn in Staten Island.

The election of Mr. Giuliani, a Republican Brooklyn native and Manhattan resident, is viewed as a watershed moment for the conservative borough, and he remains popular there. The Staten Island Advance reported he was among the GOP heavyweights who urged Mr. Donovan to run for the seat after former Congressman Michael Grimm—another Republican—resigned in January after pleading guilty to a felony tax evasion charge.

Mr. Giuliani also campaigned for Mr. Grimm during the latter’s first bid for Congress in 2010, and backed Mr. Grimm once again in 2014, just days before Mr. Grimm crushed Democratic challenger Domenic Recchia in his November re-election.

The former mayor has been dispatched to garner support for GOP candidates on Staten Island before—he appeared with Republican mayoral candidate Joe Lhota at several events in the borough in 2013. 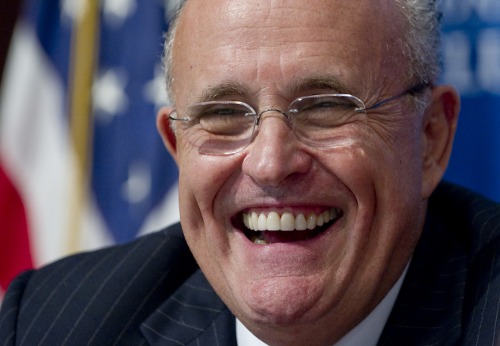