The premise of Snatch Game is a very simple one: to do a funny celebrity impersonation. This point seems to have been lost on many queens over the years, with absurdly tragic results. Many miss the point entirely and simply dress up to look like the given person. Sonique and Phi Phi O’Hara didn’t even try to make Lady Gaga interesting, let alone funny. Others seemed to think that simply using language that referenced the celebrity was intrinsically…something, as when Mariah did Joan Crawford and mentioned wire hangers.

The Snatch Game episodes do feel a bit like Groundhog Day, because the action plays out the same every time for no good reason whatsoever. RuPaul announces that the challenge is upon the queens, and inevitably some are completely befuddled and unsure of what to do. Worse is the fact that in a prior season Jinkx commented that the cast should know that Snatch Game is coming and they still act as if it were unprecedented.

This year, hilariously, we have the opposite situation: both Miss Fame and Violet Chachki had been planning for months to do Donatella Versace. At first both dig in their heels, neither having an alternate—despite the fact that many queens have had their preferred choice rejected by the producers in the past. Honestly, do none of the queens call prior contestants once cast, to ask for advice?

As the weeks pass it’s growing obvious that Violet’s obnoxiousness is a function of her youth and not malevolence. She’s really coming into her own as the season progresses. It seems that she’s the one this year who actually gets how the show works and has cracked the code. Though Violet doesn’t get meta on camera, she must realize that it’s a near-certainty that two queens doing the same character would end up lip syncing against each other. Very wisely, she blinks and decides to impersonate Alyssa Edwards instead.

The queen with the baffling choice this year is Kennedy Davenport, who has not particularly been known for her humor. She decides on the perhaps the riskiest Snatch Game character the show has ever seen: Little Richard. Both Ginger Minj and RuPaul seem unable to wrap their heads around it. First, last and foremost, he’s a man. But to Kennedy’s point, he has been overlapping with drag culture since the beginning of his career.

Snatch Game episodes are often hard to watch due to the editing. A lot of times we can only hope that a queen’s comment was cut off or taken out of context, because the responses are sometime so poor that they not only seem unfunny but as if the given queen has never had a conversation before. Add to that the random reaction shots and it’s not easy to deduce what the real T is.

This year was quite good by Snatch Game standards. Violet did a fine job as Alyssa and Katya had a fairly decent turn as financial advisor Suze Orman. Pearl was superb as Big Ang, both in terms of delivery and appearance. Ginger Minj was absolutely hilarious as Adele, dropping one killer line after another with a straight face. And Kennedy’s big risk paid off—her Little Richard was so over the top and demented that it was exactly what Snatch Game is all about.

Then came the rest.

Jaidynn as Raven-Symone wasn’t really all that bad. She kept hitting the same joke over and over but so did Kennedy—hell, so does SNL with their impressions. Miss Fame as Donatella was absolutely painful and not at all funny. It seems Fame doesn’t really know just how funny she naturally is. If she had just started dorking out about chicken facts as some rural character, it would have killed. Last and certainly least was Max as Sharon Needles, whose answers didn’t seem to make any sense at all, let alone be funny. (She looked spooktacular, to be fair.)

The judging gave a tie win to both Ginger and Kennedy. The bottom three ended up being Miss Fame, Max and Jaidynn. In what is surely one of the most WTF moments the show has ever seen (other than any time Tammie Brown is around), Max takes off her corset, sits down on the stairs, and starts singing. No one knows what to make of this, the present author included.

Unfairly, Ru puts Jaidynn up against Max, while sparing Miss Fame. This despite the fact that Michelle told Jaidynn that her shtick was funny the first time. Fame, on the other hand, was never funny even once. Regardless, we are witness to the two most mismatched performers since Willam sent Jiggly home. The song “No More Lies” is firmly in Jaidynn’s wheelhouse, and there’s only so much Max can do with it. In a precise parallel to Milk and Trinity lip syncing to Salt-N-Pepa, jaws dropped everywhere as Jaidynn sent our beloved quirky conceptual queen home. Just like with Milk, the second a queen appeased Michelle’s arbitrary demands is the second she got sent home. 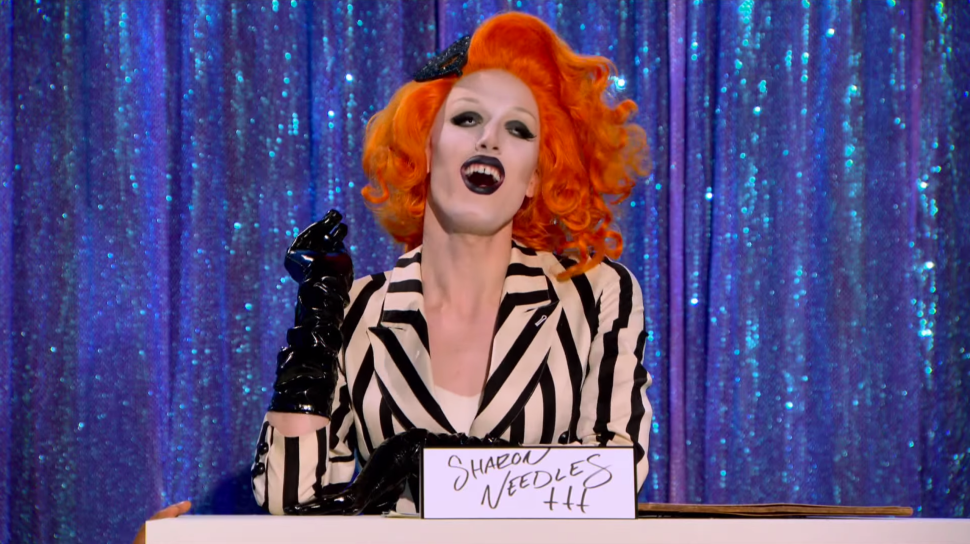