“It is on all of us to reject the quiet tolerance of sexual assault and to refuse to accept what’s unacceptable,” President Obama said last September at the launch of the White House’s It’s On Us campaign, calling on colleges nationwide to combat sexual assault on campus.

Around the same time, Columbia University senior Emma Sulkowicz began hauling her mattress around school to protest her accused rapist’s continued presence on campus. Then there was the now-retracted Rolling Stone article about an alleged rape at a University of Virginia frat party, and the conviction of former Vanderbilt students Corey Batey and Brandon Vandenburg on multiple counts of rape and aggravated assault—to name but a few of the times campus sexual assault made the news in the past seven or so months.

“When you put something on the front burner in terms of national discourse,” John Beckman, New York University’s vice president for public affairs, told the Observer, “you basically require of people that they rethink the issue.”

The more campus sexual assault is covered in the media and protested by victims and their advocates, the more impetus there is to accept there’s a real problem that needs fixing—and universities are responding with a variety of initiatives.

Some administrations are instituting top-down reforms. NYU, for one, introduced a comprehensive new sexual assault policy last September in response to a federal mandate requiring colleges to update their practices. As part of the updates, they established S.P.A.C.E. (Sexual misconduct, Prevention, Assistance, Counseling, and Education), a lounge area where students can share experiences, find literature, receive counseling, and host meetings.

“We hope it will be the hub for students to congregate around the issue [of sexual assault],” Zoe Ragouzeos, student mental health director for NYU’s counseling and wellness services, said.

This semester, the university also debuted a brief but mandatory online course for all 40,000 of its students, covering, as Ms. Ragouzeos explained, “everything from prevention to the way alcohol affects women’s decision-making,” to “what do you do if something has already happened—where do you report?”

Many would argue teaching women about “decision-making” isn’t the right way to prevent sexual assault—that rather, colleges should educate students about consent.

Say What You Mean, and Mean What You Say

Consent lies at the heart of many sexual assault cases, and yet often isn’t taught until freshman year of college, if at all. Even then, it’s an oft-debated issue. While “no means no” was a long-touted tagline of consent advocates, the preference is now shifting toward “yes means yes”—the notion that consent requires participants to actively say, or indicate through body language, that they’re O.K. with partaking in a sexual act. Consent isn’t just the absence of an objection.

“You must verbally, or otherwise by your actions, communicate ‘yes’ at every stage of the sexual interaction,” Ms. Ragouzeos said.

Affirmative consent is the topic of a much-talked-about Colgate University seminar, wherein students explore Jaclyn Friedman and Jessica Valenti’s book, Yes Means Yes!: Visions of Female Sexual Power and a World Without Rape. The course has been offered since 2009, when it was designed as the senior project of a Sociology/Anthropology double major, and then gifted to Colgate to use in future years.

Emily Hawkins and Biz Yoder both took the course, and eventually became student facilitators. The seminar has become so popular, less than half of the students who signed up this semester got in, they said. Around 10 of the 70 current participants are men in fraternities.

“I think it’s sort of become trendy in a way that I never expected it to be,” Ms. Hawkins told the Observer. “It’s just become the cool, sexy thing to do.”

Learning about affirmative consent is easy enough, but putting it into practice might seem more complicated. As detractors have argued—and as students new to Colgate’s seminar often fear—continuously asking your partner for consent can make for awkward sex.

But practicing affirmative consent doesn’t mean you have to act like an unromantic robot.

Students are ready and willing to talk about sexual assault, and that’s why some schools are involving the entire campus community in developing new policies. At Temple University last fall, President Neil D. Theobald assembled a task force to address the school’s transition from a predominantly commuter campus to one with about 12,000 residential students. This increased residential population could pose new dangers when it comes to sexual assault, Ray Betzner, Temple’s associate vice president of strategic marketing and communications, said.

(It should be noted that Temple is one of around 100 schools under Title IX investigations for allegedly mishandling students’ sexual assault reports. The Office of Civil Rights hasn’t yet given Temple its recommendations.)

The task force, composed of students, staff and faculty, will make recommendations regarding the school’s educational programs, the way it responds to reports of assault, and its adjudication process. The team plans to produce those recommendations this spring.

Ray Smeriglio, Temple’s student body president, said preventing sexual assault is a community issue—administration or students alone can’t solve it. While student activism is “phenomenal,” he said that unless the administration gets involved, “things don’t move as fast” on the policy end.

It also works vice-versa. If you’re a school looking to update your policies, it’s crucial that students are involved in the discussion.

Scott Brown, Colgate’s associate vice president and dean of students, thinks administrations need to work with students to find solutions—even if it seems daunting. He recalled attending education conferences, and meeting school administrators terrified of talking about sex with students.

“Listen,” Mr. Brown tells them, “I’m a balding 47-year-old guy in a sweater vest, and [students] are talking to me, and I can tell you they’re not holding anything back. So that tells you people are interested in the topic.”

Administrators have historically been reluctant to be proactive about preventing sexual assault, Lisa Maatz, vice president of government relations at the American Association of University Women, told the Observer. They tend to wait for federal mandates to come down, or for student activists to pressure them into making changes.

“Some schools see this as a PR issue. They’re worried that somehow it’s going to impact enrollment or their reputation,” she said. “But I have news for them: It’s happening in every college.”

The smart college, Ms. Maatz said, doesn’t have its head in the sand. Instead, it acknowledges that sexual assault is a problem on all campuses, and shows that it’s “going above and beyond” to address the problem.

“If I were a parent sending a kid to college,” she said, “that’s where I’d want to send them.”

Another prevention tactic has been met with some criticism: banning booze—or, at least, restricting its consumption.

Though Rolling Stone retracted its story about an alleged rape at UVA, the school nonetheless implemented new rules governing frat parties at the start of 2015.

According to the new guidelines, frat parties can’t serve pre-mixed drinks—only canned beer and wine. Hard liquor can only be served if the frat hires a licensed, third party bartender. Additionally, parties must have a certain number of sober brothers stationed near stairs leading to residential rooms, and where alcohol is being served.

A UVA senior who’s a member of a sorority said she isn’t sure the school’s new frat party rules are actually going to change culture on campus.

“They’ll take six shots in their dorm rooms before going out,” she added.

Though alcohol is often a catalyst in sexual assault cases, it isn’t the reason people commit rape. Plenty of sober people unfortunately commit sexual assault, and plenty of intoxicated people don’t. Take away alcohol, and you still have to ensure students understand consent. Training in bystander intervention is also crucial, so students know when and how to intervene if a situation between other parties looks like it might lead to sexual assault.

“The notion that you can simply wave a magic wand and ban the demon rum, and everything is going to be safe, is ridiculous,” Ms. Maatz, of the AAUW, said.

But UVA stands by the new rules,

“We commend the hard work of our student leaders,” said UVA spokesperson Anthony de Bruyn, “who led the development of addenda to the existing fraternal organization agreements for each of the respective four Greek councils, which include important steps the students identified to improve safety,” he told the Observer in an email.

UVA also released an Interim Policy on Sexual and Gender-Based Harassment and Other Forms of Interpersonal Violence on March 30. Still under revision, the interim policy addresses the way UVA adjudicates cases, and ensures they’re complying with recent federal and state mandates, among other things.

The silver lining to all this trial-and-error in sexual assault prevention is that it forces schools to continuously ask themselves, “Are we doing this right?”

“These are really tough questions, so I am not surprised that we keep asking them,” he continued. “How do you get better if you don’t ask yourself how to do it better?” 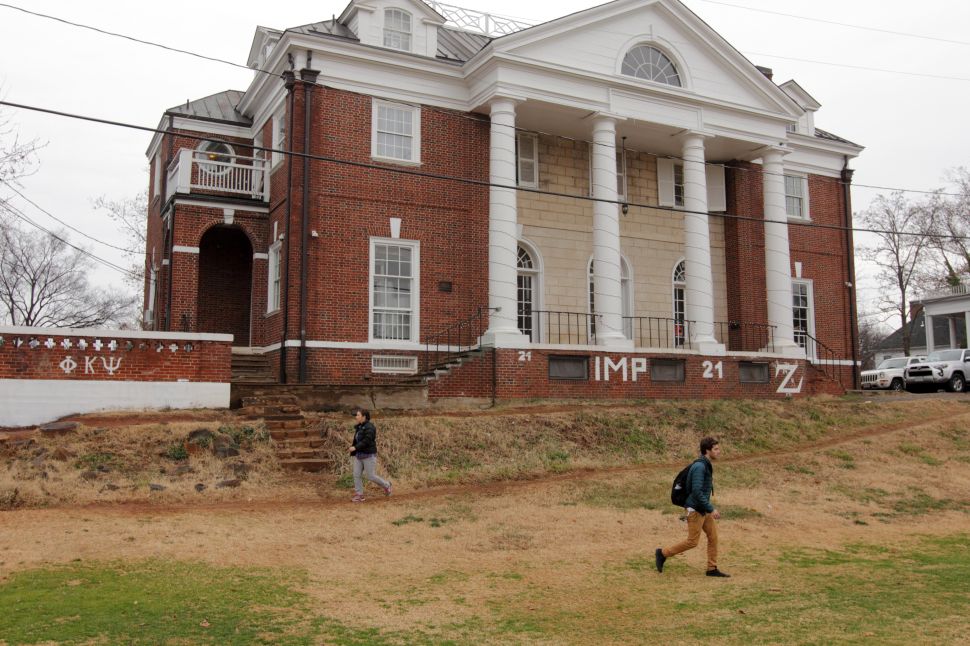