I’ve been writing about the myth of social media marketing since 2009, and I had a book published about it in 2012. The thing that has amazed me most over the years is that the same myth keeps playing itself out and nobody seems to realize it. So we’re all just taken for a ride again and again and again by the same group of crooks who have been behind that myth since ’09. Facebook, one of the biggest perpetrators of this, is at it again with their video efforts. And with a projected $100 billion on the line in 2019, it’s a decade long pattern worth taking note of.

If you’re not familiar with the myth of social media marketing. It basically boils down to the idea that chasing, and paying for, soft metric of success like “likes,” comments, and shares are equal to, or in some cases better than, chasing more hard metric success like actual sales, in-store foot traffic (when applicable), and time spent on site.

This is generally coupled with the belief that these new soft metrics are so superior and that marketers no longer have to spend on the old traditional means of reaching customers like TV or print. In the case of what we’re discussing here with Facebook video, the logic goes that you can cut away from your billions spent on television advertising because Facebook video is so new and revolutionary.

As I mentioned, by 2019, Forrester is projecting spending on digital marketing will eclipse the spending on television advertising by roughly $13 billion and stand at $100 billion. Another research group Magna Global, also backs up this prediction. For what it’s worth, I don’t put much stock into what any research group says, but let’s humor them for a moment and assume these projections are true despite the fact that shows like Empire on broadcast, The Walking Dead on cable, and both the Super Bowl and College Football Championship games all have been setting television viewing records over the past year. Oh, and let’s not forget that the NCAA championship game had its highest ratings in twenty-two years as well. Given the likelihood that this trend will continue, it seems pretty foolish to encourage advertisers to give up on television and transition to digital efforts like Facebook Video. Yet that’s exactly what’s being hyped as the television upfronts approach.

Advertising agencies, digital media sites and social media companies like Facebook want us to pretend those record ratings just aren’t happening. Or that television shows like Mad Men, Breaking Bad, Better Call Saul, Fargo, Game of Thrones and True Detective haven’t become cultural phenomenons. To say nothing about the success of Shonda Rhimes and her Thursday night ABC lineup. Also like I mentioned at the start of this column, this isn’t a new tactic at all. The “TV is dead” concept actually predates the social media marketing myth and goes all the way back to 2004. Maybe even further. The TV is dead myth links to one of the original social media fraudsters, Seth Godin. You can see him arguing a decade ago that here that a brand could never be successful today using the same TV spokesperson through the power of television, except right now in 2015, as I write this, Game Of War is having huge success with its TELEVISION campaign featuring Kate Upton. And you don’t need to look any further than Michael Jordan, who celebrated 25 years of pitching underwear on television, to see how wrong Godin truly was.

As you might have guessed, I don’t think cutting money from television and giving it to Facebook is smart. Especially because, just like the numbers we were given about Facebook’s capability to reach your audience and customers, the numbers behind Facebook’s video efforts are flat out bullshit.

Not that you’ll ever hear the journalists we trust to come out and say that. Journalists believe the social media marketing myth because they have to, otherwise they’re afraid they think they’ll look obsolete to their colleagues. They’re also afraid of pissing Facebook off since its such an enormous source of traffic for them. Advertisers need to believe the myth because otherwise, how do they justify the billions they’ve been wasting on it since 2008? Agencies need to believe it because they collect a big chunk of those billions the advertisers are throwing away on this stuff.

Thankfully, even if these folks don’t want to accept the truth, time is still running out for the tech bubble that’s formed around consumer facing tech companies who are entirely dependent on advertising to survive. For all the smoke and mirrors that are created by companies like Facebook and agencies like Vaynermedia, the simple truth is you can’t have companies with incredibly high burn rates and incredibly low revenue before something gives. I’m not the only one who thinks so.

Facebook isn’t naive–they are Machiavellian. They know that this correction is coming in terms of how agencies, marketers, and brands spend their money on consumer facing technology companies. But since some of the people who work at digital advertising agencies are naive, Facebook has put their plan into motion to prepare themselves for that coming correction when ad dollars aren’t blindly being dumped into social media platforms that use these soft metrics to boast about their success. Don’t think of them as a social media platform Facebook seems to be suggesting. Think of them as a digital distribution channel no different than Netflix, Hulu, Yahoo! Screen, and YouTube. Notice the difference? The bubble around social media companies will pop, but Facebook has moved itself away from those companies and the “social media” line item on the marketing budget and into the “digital” line item on the marketing budget.

It wasn’t that long ago that Sheryl Sandberg at Facebook was advocating small businesses set up Facebook Pages to reach their customers. Boasting that they’re all on Facebook anyway, so the small businesses couldn’t afford to be left out. Now Advertising Age is touting Facebook as “YouTube’s biggest rival” despite, in that very same article, Facebook declining to release any hard numbers concerning videos beyond claims that users were posting “75 precent more video than they did last year,” which is pretty meaningless. So how exactly Facebook is YouTube’s biggest rival is anyone’s guess. That’s a lot like how Blendtec was telling people their “viral” videos had increased sales 300 percent without ever divulging actual sales figures. (That is, until The New York Times interviewed an employee there who confirmed sales on the consumer side had not really gone up at all despite Blendtec’s claims of viral video success. I covered that specific piece of bullshit here.)

Facebook is being just as truthful as Blendtec. Part of the social media marketing myth is fueled by journalists not questioning the numbers given out by these platforms at all. We saw that with Snapchat just recently, and before that with Tinder, and before that with Facebook itself. (Here’s a fun game: If you’re reading a new story that says Facebook has over a billion users, you can immediately stop reading it because that number doesn’t account for things like spammers, people with fake accounts, people with multiple accounts, and bots. And that’s before we get into where the rest of those users are based. If you think a lot of that billion is based stateside, you’d be wrong, but journalists don’t often parse this out because they bought into the myth for reasons I mentioned here.)

Even if we consider for a moment that Facebook is legitimately now as big as YouTube in terms of video, that also means they have a serious problem on its hands. That’s because a lot of people, celebrities included, are ripping videos off YouTube and then posting them up on their Facebook Pages in order to collect likes, views, comments, and shares. This creates a whole new host of problems ranging from copyright holders not getting compensated as they might have for their videos posted on YouTube, to Facebook opening itself up to similar lawsuits YouTube has faced throughout its history for hosting stolen video. On top of which, the videos on Facebook autoplay, so they are quick to rack up views if they are played longer than the three seconds Facebook uses to calculate a view. YouTube doesn’t register a view, usually, unless the video is watched all the way through. So if all the popular content on Facebook is just stolen from YouTube anyway, is it still really “bigger” than YouTube? Even when they calculate video views in such a way that there would be way more of them than there would be on YouTube?

My question for you is simple: Facebook has been super shady since Day 1, even before I started documenting this sort of thing in 2009. When throughout Facebook’s history have they indicated they can be trusted? When Mark Zuckerberg told a Harvard friend that he was going to “fuck them in the ear” when discussing his plans for the Winklevoss Twins? Was it when they were buying up companies overseas to access their databases in order to spam those customers to grow the site? How about when Instagram (owned by Facebook) claimed to the media that it was bigger than Twitter, and then a week later deleted millions and millions of users, thus shrinking whatever the platform’s actual user numbers were? Or how about when they lured everyone onto the platform saying that a Page was the best way to reach your audience, and then turned around and shut down the ability to freely reach those users under the guise of creating a better user experience? You know, despite the fact that by liking a page (at least, as Facebook has always presented the value of a page as being as far back as ‘09) a user had indicated an interest in what the page was about and hoped to hear more from them as they had things to share. We’ve seen this all before.

The issue is that Facebook has already demonstrated they can’t be trusted. Right now video reach is pretty good, but so was organic page reach. Then Facebook killed organic reach, and claimed it was to improve the user experience (which isn’t really true because if that was the case they would have quietly made the update and not wrote a blog post as damage control to explain that it wasn’t just a cynical money grab.)

With $100 billion on the line, do you really think they’re not going to do the same thing with video that they did with organic reach once they’ve fooled brands and advertisers to give them enough money to survive the looming correction?

B.J. Mendelson is the author of Social Media Is Bullshit from St. Martin’s Press. 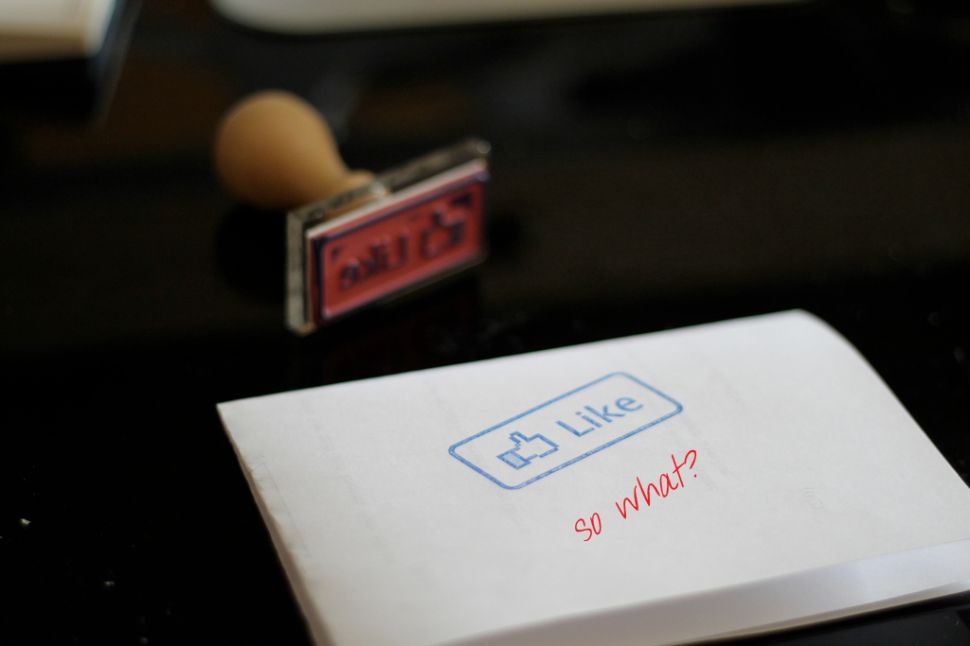