That shatter-proof phone app is more than just a marketing stunt. It might also be a blatant copy of an existing patent filed by Apple.

On Monday, the Observer reported on a new app called Chute, which claimed to prevent phones from shattering when dropped from heights of up to 10 feet. It turned out that the story is untrue and is an attempt at a “lighthearted prank on the public” by the marketing firm Boogie, who sounded flustered and continuously backtracked through our follow-up conversation after the uncovering of the prank.

The story of this stunt—described as “a joke [taken] way too far”—continues today with our learning that the technological procedure behind the fake app Chute is nearly identical to a process patented by Apple.

When we reached out to Boogie yesterday requesting another interview, Daniel O’Connor, the Boogie product manager who posed as the Chute founder, replied, “I don’t have any further comment.” When we emailed specific questions regarding Apple’s patent, he admitted that his team was aware of the patent held by Apple and also provided statements that contradicted what he said in our first interview.

“We are aware that Apple holds the patent you referred to as we noted in our reveal,” Mr. O’Connor told the Observer over email.” (Yet, this is stated nowhere in their “reveal“).

He failed to respond to our question asking how his team came up with their realistic and convincing technological explanation of Chute. He also ignored our question asking if his team researched to see if any other companies are using this technology or hold a patent for it before they designed the “prank.”

The patent we’re referring to is for an “iPhone protection system” and was awarded to Apple last December. It describes the iPhone’s ability to sense when the device is dropped (by using the phone’s built in accelerometer, gyroscope and GPS), and then use its vibration motor to shift the device’s center of gravity in midair so it can land safely.

In our first interview with Mr. O’Connor, he described a technical process for the app that clearly mirrors the process patented by Apple. (The only difference is that Apple’s patent is not for an app, but for a hardware component). But in interviews following our mention of the patent, his explanation of how Chute was supposed to prevent phones from shattering when dropped changed completely.

We spent a good portion of our original interview with Mr. O’Connor clarifying how exactly Chute worked. He explained that the app uses the phone’s built-in accelerometer and gyroscope (which sense motion) to detect when the device is free falling. This part made sense.

The next part (the app’s use of the phone’s built-in vibration motor to actually prevent it from shattering) was a little unclear. We sought to clarify, specifically asking if he meant that the phone “reorients midair” so it will land with the screen facing up.

He confirmed this and said that “it changes how it falls,” adding that “a good comparison is how a cat always lands on its feet.”

Yet, after being confronted with questions about Boogie’s knowledge of Apple’s patent, Mr. O’Connor completely backtracked on how Chute was supposed to function. In our original interview, he specifically clarified that the app would indeed cause the phone to reorient midair, and now he is claiming something completely different.

“Our explanation was that the phone would vibrate once it hit the floor and prevent it from shattering whereas Apple’s patent talks about shifting the phone’s direction midair,” he wrote in an email.

Over email, he also defended the stunt saying that if Chute did exist, “the way [they] described the technology would be accurate.”

This may be the truest statement to come from Boogie so far. Yes, it is accurate—obviously so, since one of the biggest technology companies in the world has designed it and patented it. 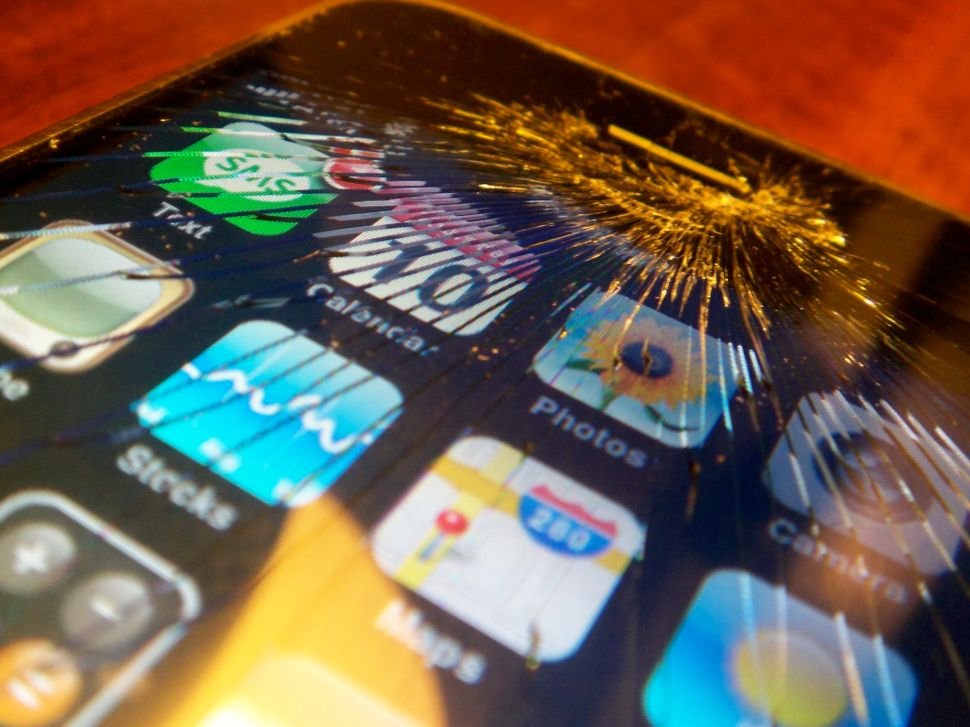