Lauren Adams knows she’s not like most TV actors.

“I never got to do a Law and Order or anything like that,” she told the Observer. Instead, the UCB-trained comic made her television debut as an Indiana Mole Woman on Unbreakable Kimmy Schmidt, the delightfully binge-watch-able Netflix original series from Tina Fey and Robert Carlock. Ms. Adams plays Gretchen Chalker, the mole woman most brainwashed by Reverend Richard Wayne Gary Wayne (Jon Hamm) and his Spooky Church of the Scary-pocalypse.

We talked with Ms. Adams about filming in the bunker, acting alongside Matt Lauer, and the similarities between her character and Michelle Duggar. And if you’ve burned your way through all 13 episodes of Kimmy Schmidt and are looking to see more of Ms. Adams, you can catch her as she hosts the upcoming Night Late show at UCB’s Chelsea theater on April 22.

Unbreakable Kimmy Schmidt was your TV debut. How did you land the role—did you have to audition?

I did have to audition for it. I sent in a tape, but didn’t hear for a while. I was actually out of the country in Costa Rica when I got a call that I was going to have to come back and have an audition with Tina Fey.

That plane ride—those five hours felt way longer because I was feeling anxious about what was on the other end.

We read the Matt Lauer scene—we just went through that a couple of times.

[Tina Fey] is so wonderful to work with. She made it easy.

How did it feel finding out you’d booked it?

It felt incredible. It was the best. I went and bought a bottle of champagne and celebrated with friends that night. I feel like I won the comedy lottery.

How did you prepare to play Gretchen? Did you watch a lot of 19 Kids and Counting? I feel like she’s very Michelle Duggar-inspired.

I do watch 19 Kids and Counting. I know the hair seems to be very much inspired by Michelle Duggar.

Gretchen’s interesting because while she seems out of her mind, I think she really holds true to her beliefs. You have to make that person at least somewhat real. She’s not just totally bananas—she bought into it. It’s important to her. To prepare, I did watch a lot of documentaries—there’s a bunch on Netflix–about people who get taken into cults. Listening to a lot of people who are seemingly very normal people, who bought into belief system. I wanted to bring some of that to Gretchen—to make her feel like a real person.

You have a huge improv background with UCB. Did that help at all during filming?

Our writers’ room is incredible. All those jokes are theirs. They’re all so tight and specific—there’s not a lot of improv. [But] I think, definitely, my UCB background helped with my comedy instinct and understanding jokes.

How much time did you actually spend in the bunker?

[The bunker scenes] would happen all at once—they called it a “Bunker Day.”

We’re not really sealed in there. All the walls come off separately, so you can fit the cameras and everything. If you could see the other side, I’d think you’d be amazed how many people were in there during filming. Sometimes 10 people would be in there.

Did you and the other mole women do any pre-filming bonding?

Filming in the bunker definitely bonds you. But we didn’t do a ropes course or anything. We just started working.

It’s really well done. He killed every joke in that scene.

And how was Jon Hamm?

He’s also such a pro. I’m easily intimidated, because who am I? He was very warm to everyone in the room, even background and extras. He joked, “I should probably memorize my lines,” and then he had everything fully memorized.

Did you have a favorite scene to film?

I really loved the mole women getting re-trapped in the bunker. That was really fun, to have all these women back in there again. I love that the writers did that—it was so clever. I thought they wrote such good jokes for every mole woman in that scene.

[Ms. Adams explained that Gretchen’s pre-makeover hair-do was a combination of her own hair and a wig.]

The tall “Duggar part,” if you will, is my real hair teased to perfection. I’m proud of how tall it is. I feel luxurious.

Oh—and can we talk about the show’s theme song?

It’s the catchiest thing ever written. Did you guys know what it was going to sound like?

I didn’t hear it before the show started. I heard it for the first time when we saw screening of first episode. Its incredible. Jeff Richmond is so good. It gets stuck in your head. Now I’m singing it—it’ll be in both of our heads for the rest of the week.

Finally, if you had to be trapped in a bunker for 15 years with any member of the Unbreakable Kimmy Schmidt cast, who would it be?

That’s a great question. I would happily be there with any of them, but I do think Kimmy’s the right choice. If you don’t have that spirit, you’re going to give up. She is unbreakable.

Titus would be fun, but would he lose his mind after a while? I don’t know the answer to that. Kimmy is the logical choice because she made it through. I’m thinking about survival here. 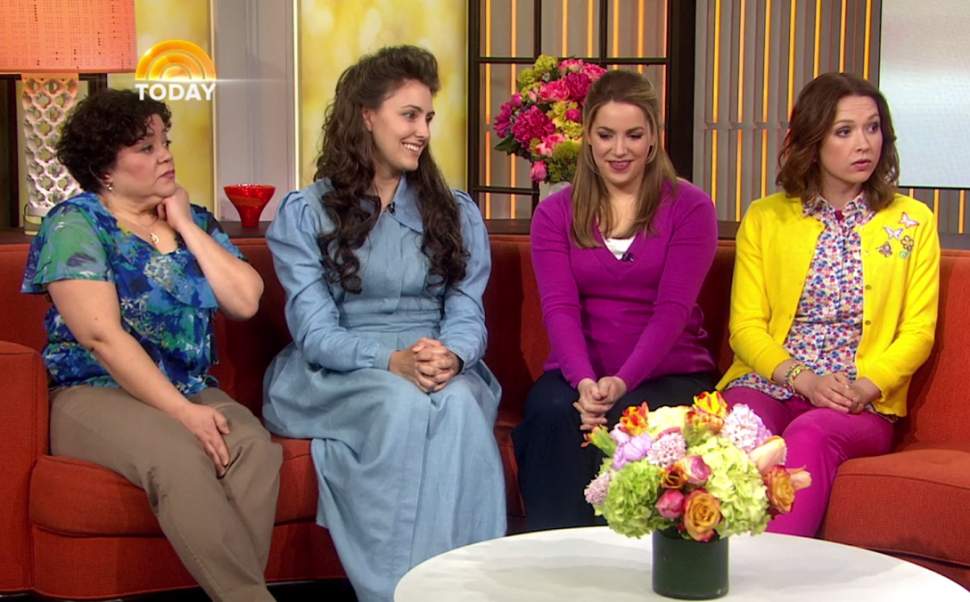