It had to happen. With stage adaptations of two classic movie musicals opening on Broadway in one week—both based on masterpieces by Vincente Minnelli from the golden years of MGM, both set in Paris with screenplays by the great Alan Jay Lerner, and both starring the young Leslie Caron—attention must be paid. Except for one life-saving exception, both turn out to be bland, uninspired disappointments, so don’t be surprised if attention also wanes.

The exception is the magical star-making Broadway debut of the dazzling dancer Robert Fairchild. He’s already established as a box-office bonanza with the New York City Ballet, but who knew he could also act, sing and command the legitimate stage with the same brio as his idol, Gene Kelly, in the film that won the Best Picture Oscar in 1951? Handsome, masculine, athletic, agile, compelling and ready for Technicolor, Mr. Fairchild has it all in one package. But more about him later.

First, let’s face it. If you’re going to turn unforgettable movies into dull stage shows, comparisons are odious but inevitable. Take the umpteenth revival of Gigi at the Neil Simon that does nothing to enhance its fading reputation and makes you rue “the night they invented champagne.” There’s something stale and lethargic about Gigi that resists the passing of time. Maybe they shouldn’t have opened with a song called “It’s a Bore” from which it never fully recovers. I would love to have seen Audrey Hepburn in the original production without music, but the coaching, grooming and preparation of a pretty young mademoiselle to become a courtesan in turn-of-the-century Paris seems ossified now.

The casting is all wrong. Howard McGillin is too young to play Honoré, the charming roué who has devoted his life to the pursuit of sensual pleasure, played with twinkling insouciance by Maurice Chevalier in the famous 1958 film. As his nephew Gaston, nobody expects another Louis Jourdan, but Corey Cott hardly looks old enough to shave, much less take on Gigi as a mistress. When he discovers she is no longer that “funny, awkward little girl,” he might as well be singing “No, No, Nanette.”

Gigi herself, played by Vanessa Hudgens, lacks everything but energy. Worse still, in an age of preposterous political correctness, the enchanting “Thank Heaven for Little Girls” is now sung by Gigi’s aunt (Dee Hoty) and grandmother (Victoria Clark) instead of Honoré, removing any unfounded fear of lechery and ruining the song completely. Are they crazy? “Thank Heaven for Little Girls” is (and always was) a Lerner and Loewe song about the miracle of youth, not pedophilia.

Eric Schaeffer’s perfunctory direction and Joshua Bergasse’s pedestrian choreography don’t help. You get hot air balloons, frolics at the beach in bathing costumes, a swaying chandelier at Maxim’s, and to make sure we know we’re in Paris, every now and then they drag the Eiffel Tower in on rollers. This Gigi is a colossal bore. In a cardboard Bois de Boulogne, the old folks still sing “I’m Glad I’m Not Young Anymore” but this time, so am I.

An American in Paris, at the Palace, dusts off the same Paris clichés, but with more fizz. Craig Lucas’ dreary “updating” of Alan Jay Lerner’s perfect screenplay, cheapened by awkward character twists and banal dialogue, dotes too much on G.I. Jerry Mulligan’s decision to stay in Paris after the war, prompting a tiresome array of postwar jokes about Vichy, Nazis and swastikas. You can almost hear the pre-production dialogue in the planning stages: “We already have the movie, so why re-make it?” “How can we improve perfection?” So they didn’t bother. This is good and bad—good because it’s an honest (but ill-advised) attempt to do something fresh and different, bad because they deleted the best songs and substituted tunes from other Gershwin shows where they do not fit.

When Jerry mispronounces Lise’s name as “Liza,” out of nowhere comes another song title. She sings “The Man I Love” while writing a letter. Lise’s fiancé Henri (Max von Essen) still performs “I’ll Build a Stairway to Paradise,” one of the few holdovers from the movie, but he now works in the garment business and the number is a mess. To give the poverty-stricken Adam (memorably played on film by Oscar Levant but less so by Brandon Uranowitz) more to do besides making wisecracks, the script now forces all three men to love the same girl. As Milo, the rich American dilettante who hides her ulterior motives by pretending to finance Jerry’s career as a painter, brassy Jill Paice is no Nina Foch, who managed to make a supporting role memorable. Now she avoids delusion by singing “Shall We Dance.” And Leanne Cope’s Lise, disguised as gamine to resemble Leslie Caron in her first screen role, barely registers at all. There’s no charm, no joy, and I didn’t care about any of them.

Which pretty much leaves Robert Fairchild to build the momentum and sustain the interest the rest of the show sadly lacks. There is no chemistry between him and Leanne Cope’s Lise, but even when he isn’t dancing, you can’t take your eyes off his body language. Nobody could say an embarrassing line about his experiences in the war like “Why I had to catch my buddy’s brains in my lap, I’ll never know,” but between pretentious snippets of everything from “Cuban Overture” to “Concerto in F,” he is consistently honest and natural. He’s ready to play a three-dimensional character, but the role isn’t there.

If director-choreographer Christopher Wheeldon would only beef up his part, he could be developed into something spectacular. As it is, he’s the most magical discovery since Gene Kelly first sailed across the stage on Christmas night, 1940, in Pal Joey. Catch him fast, before Hollywood does, and he never comes back. 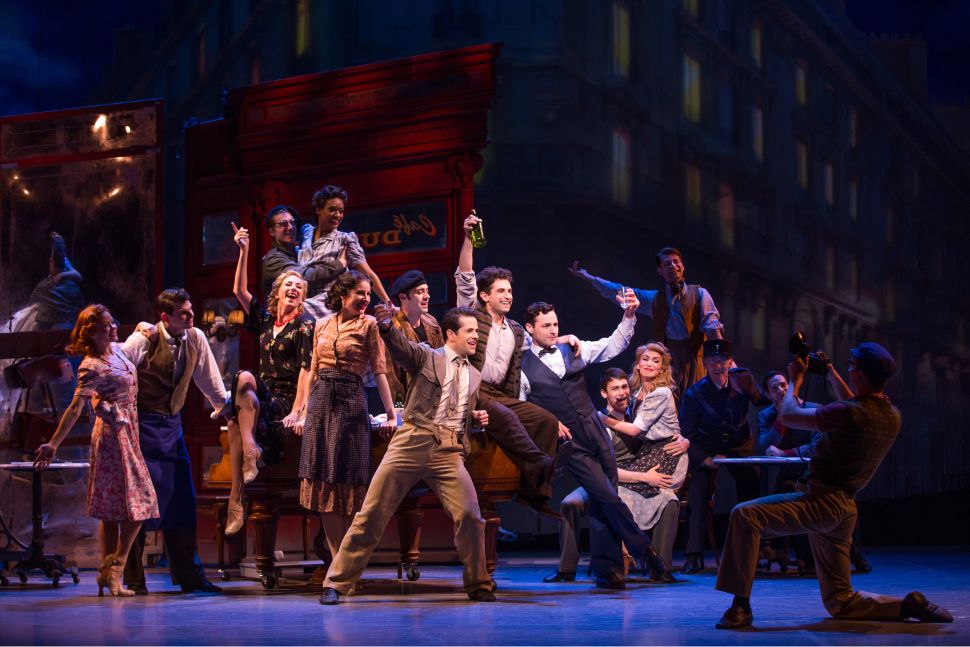