No one got chased, captured, tortured, poisoned, set on fire or strangled and stuffed naked into a suitcase during this week’s episode of The Americans, but the pit of your stomach probably couldn’t tell the difference. Moments that the show’s been building toward since the pilot came to pass—but it’s how those moments were depicted that made them hit home. Directed by Larysa Kondracki from a script by showrunners Joel Fields and Joe Weisberg, “Stingers” felt less like a television episode and more like an experiment in how to use editing and camera work to fuck up an audience.

This could be as easy to accomplish as just sticking a prop where we’d be sure to see it. For instance, think of lonely Henry Jennings’ visit to even lonelier Stan Beeman’s house. The camera’s dispassionate, slightly elevated view of Stan amid the detritus of his married life was already depressing enough. The dialogue echoed the imagery: “Doesn’t Matthew still live here?” Henry asks of Stan’s son. “I don’t know,” Stan replies. “I don’t know.” It’s as if he’s hoping he’ll find the kid somewhere in a pile of silverware. But ending the scene with a shot of Henry and Stan in the background, with a discarded sugar bowl in the shape of a smiley face anchoring the foreground? That’s plain mean.

Just as restrained, just as unnerving, just as deft at communicating a family in crisis: the staging of Philip and Elizabeth’s confession to Paige. It starts when they find their daughter up late, standing in the glow of the overhead lighting at the island in the kitchen. (Anytime a character turns a corner and finds a pale girl standing there waiting for them, a filmmaker is trying to tell you something’s wrong.) The poor kid has finally cracked under the strain of living with parents who are obviously lying to her about…something. “This isn’t normal!” she insists, like the act of saying it can give her hidden feelings the validation Philip and Elizabeth have denied her for so long.

Caught flat-footed, her folks stonewall her for a few seconds. She retreats to the shadowy kitchen table, her back turned to them. Philip looks at Elizabeth and nods imperceptibly: permission granted. The camera then pans from him to her, passing the torch of complicity. They walk over to the table and sit down, flanking her. The alternating close-ups on Philip, Elizabeth and Paige with which the subsequent revelation/conversation is staged get tighter the moment the truth comes out: “We were born in a different country,” says Philip, and with the next cut to Paige, the camera has crept closer, drawing us further into the conspiracy.

After Paige angrily retreats to her room, her parents are left in the kitchen alone. Philip picks up the phone to…do what, exactly? Call the Centre? Prevent the Centre from calling them? Make sure Paige hasn’t called the cops? At any rate, he leaves the phone off the hook, letting the dial tone soundtrack the scene. The camera slowly arcs through the kitchen toward them, framing them together as they reconnect. “But things change, Philip,” Elizabeth says, explaining why it was O.K. for them to tell Paige who they really are, where once she thought their kids would be killed by the truth. “They changed.” “I know,” he replies, sincerely. The camera cuts to an angle from the opposite side of the room, and the dial tone ends, replaced by the grating BEEP-BEEP-BEEP-BEEP of a phone off its cradle. “I know,” he repeats, sadder, as the camera pans down to the idle phone—an image of literal disconnection.

The events of the following day are hazy with shock and anxiety for both sides of the conversation; as Philip puts it, “We go to work, we hold our breath.” The show conveys this waking nightmare of nervous anticipation by fading, not cutting, from shot to shot and scene to scene. Fade from the Jennings’ car to the Jennings at their desks at work. Fade from the Jennings at their desk at work to Paige with her phone at home. Fade from Paige with her phone at home back to the Jennings at work. Soon the fades don’t even transition us between different locations, or even different periods of time: They simply mark beats in Paige’s phone call to Pastor Tim, alternately showing her brightly lit face and her silhouetted back, reflecting our uncertainty about whether she’ll tell the truth or keep the secret.

In the episode’s final scene, Stan Beeman comes to dinner, and the tension of maintaining her family’s facade around their friendly neighborhood FBI agent is more than Paige can comfortably handle. She sits at the table, openly staring at him. He looks at her, asks how she is, smiles. In slight slow motion, the camera pans over to her parents, who are now staring right back at their daughter. Philip sharpens his knives, the sound uncomfortably loud. As the camera finally pulls back through the window in the wall to follow Philip, Elizabeth, Stan and Henry to the kitchen table, it pulls away from Paige, who’s left in the living room, alone.

Much more than this happened in the episode, which was pretty jam-packed with plot movement. We learn that Zinaida, the defector Stan suspects is a double agent, is exactly what he thinks she is. We discover that Stan also suspects Martha of planting the bug in Agent Gaad’s pen, which is equally correct. Back at the Rezidentura, Arkady learns about the fake threat on Zinaida’s life that Stan and Oleg staged, without having any idea how or why it happened, and he’s just a few phone calls with the Centre away from discovering they had nothing to do with it. And in Russia, Nina gets her scientist quarry to trust her enough to speak English with her, meaning she’s well on the way to earning the freedom Oleg and Stan are fighting to acquire for her through other means.

But at this stage in its evolution, The Americans is a show that cannot only sustain but reward a close reading of its formal technique—never empty formalism, always a method of revealing character and articulating the unspoken, occulted moral and emotional meaning of a scene. From my notes: “god this is good;” “keeeeee-rist;” “these fades are killing me dog;” “jesus that was harrowing.” I’m talking about camera movements, not chase scenes. This show excels at both. 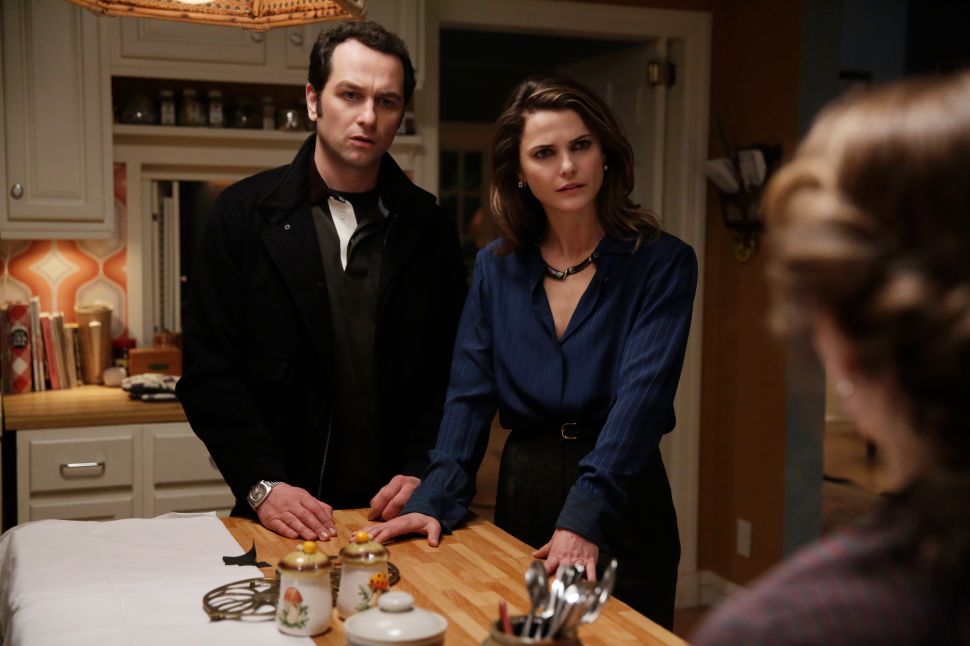