Agent Frank Gaad is making a list, and with the help of Stan Beeman, he’s checking it twice. He knows there were times he discussed highly sensitive information in his office, when such conversations are supposed to be held in the Vault, a soundproof, bugproof room designed for just that purpose. His office may have felt like a sanctum sanctorum, but the security provided by its closed door was just an illusion, shattered by a microphone hidden in his pen. So now he’s in the Vault, (un-bugged) pen and paper in hand, writing down everything he remembers about everything he shouldn’t have said outside its confines.

To Stan’s surprise, his boss isn’t doing this at the behest of the inscrutable internal security officer Walter Taffet, but out of his own guilt and desire to reform. To put it another way, he’s taking the fourth step for any counterintelligence workaholic and making a searching and fearless moral inventory of himself. “I coulda been more careful, a lotta times,” he explains. “Well, you assume you’re okay in there, we all do,” Stan reassures him. “Yeah, well,” Gaad retorts, “that’s why we’ve got rules. They built us a vault for it.”

It’s a striking line, and an ironic one: a paean to secrecy that reveals so much about this show. The concept of the Vault is the key that unlocks “One Day in the Life of Anton Baklanov,” tonight’s predictably great episode of The Americans, and many other episodes besides. It cracks the code of how many scenes in the series are shot and staged to emphasize the structures, literal and metaphorical, people employ to keep others out, and their secrets in. Breach them at your peril.

As a spy show, The Americans is uniquely situated to explore this dynamic. Think of how many scenes, in this episode alone, involve two or three people talking to each other, alone, in a room they’ve selected for the sole reason of talking to each other, alone. Gaad and Stan are just the tip of the iceberg. Gabriel, Philip and Elizabeth’s handler, returns home to find them waiting for him in his living room, its comforts belied by the utilitarian card table and folding chairs at its center; this is a place for confidential conversations.

This scene of deceptive domesticity is repeated when Elizabeth’s alter ego Michelle pays a visit to her friend Lisa and finds her estranged husband Maurice waiting with her. The pair have hit the financial skids, and they want in on the under-the-table deal Michelle has with a “consultant” collecting inside information on the defense industry. Maurice, way shrewder than his gruff demeanor would indicate, immediately makes “Michelle” as the brains of the operation, but only says so after Lisa leaves. It seems that the presence of this extraneous party breaks the vault’s seal, just as Philip and Elizabeth found when Paige interrupted their kitchen conversation about her, and when Henry interrupted her grilling of them about it.

When they leave Gabriel’s house, the Jennings have their umpteenth conversation about their lives and careers shot with the glass of their car’s windshield between them and the camera, a near-invisible visual reminder of their constant guard against the outside world. What better way to indicate Paige’s induction than to stage a car-seat conversation between her and her mother within the double-secret confines of the Jennings family garage, as the episode does later?

Other environments provide vaults of their own, their security or lack thereof emphasized by mise en scène. Philip has his long-delayed meetup with Yusuf, his asset in Pakistani intelligence, in a subterranean basement lined with the pipes and cables familiar to anyone who’s ever played a first-person shooter in such an indoor no-man’s land. His later conversation with Gabriel, with whom his relationship is growing increasingly frayed, is hidden in plain sight on a park bench near the ; the benches and the fences are arranged at sharp angles, pointing arrow-like into the icy gray nothing beyond the shore. Philip’s relationship as Clark with his “wife” Martha is still more complex, and thus he must tap his young colleague Hans to surveil their apartment, ensuring the vault is secure before he can enter.

But there are ways other than geography to ensure the vault’s integrity. Back in Russia, Nina and Anton, her scientist quarry, figured out how to build one last episode, when they began speaking to each other in English to avoid the prying ears of their coworkers. They delve deeper into its confines this week: Anton reveals that he’s not sexually interested in Nina by divulging that he slept with many of the female assistants his captors provided him with in the past. Nina reciprocates by explaining that she, too, has been passed back and forth between governments that see her only as an object to be used. Their rapport is a dark and sad reflection of the late-night punch-drunk banter between Nina’s ex Oleg and the new agent Tatiana at the Rezidentura, where they too are turned into intimates by their shared proficiency with another language.

But there’s a discordant note in Nina and Anton’s apparent kinship. Nina violates his trust by rifling through his things and pulling a long letter to his son—who has no idea if his father is alive or dead—out of its hiding place, as direct a violation of another person’s sacrosanct space as we see all night. She reveals this in a way that seems to indicate she’s letting him in on the secret reason for their relationship: She’s been sent to spy on him, to find out if he’s malingering in his mission to produce a knockoff stealth bomber or if he’s genuinely at an impasse. But this itself could be another ruse to cause him to lower his guard, just as her earlier betrayal of her Belgian cellmate proved she was capable of pulling off. Has Nina built this vault with Anton to keep others out, or to lock him in?

For Martha, the situation is very different: She is determined to do right by her husband “Clark,” a man she has no real way of knowing will do right by her in turn. When she worries that the wonderfully wizard-like Walter Taffet will see through her lies, Clark assures her she can render herself impregnable. “You know more than he does, so that gives you the control,” he says. “Just think about those words: ‘I know more than he does.’” Additionally, he equips her with a neat little anti-interrogation trick, instructing her to look at the tip of his nose instead of into his eyes, since no one can tell the difference. (The camera later mimics this technique to laugh-out-loud effect.) But this technique is just the sliding chain lock on a hotel door; her confidence that she is secure is the deadbolt.

Speaking of hotels, Elizabeth spends a great deal of time in one this episode, and her experiences reveal still another entry to the vault. Getting invited into the tall dark and handsome hotel manager’s office so as to copy the key to the room where a high-value mujahideen target will be staying is easy enough for an experienced interpersonal lock-picker like herself. The act of inviting someone into one’s workspace—whether it’s this one, Agent Gaad’s, or Arkady’s at the Rezidentura, into which he welcomes Oleg and Tatiana when he first briefs them on the KGB’s new bug in the FBI mail robot—indicates a level of trust that’s easy to exploit. (Surely it’s no coincidence that Paige finally confronted her parents about their hidden lives after her trip to their travel agency last week.)

But when Elizabeth consummates the relationship with the manager that gets her into his office later on, she winds up being the one invited into the vault by him, in this case the vault of sexual intimacy. She’s prepared to go through the motions as she has so many times before, but he wants more, demanding and producing genuine, verifiable physical arousal before they continue. It may be the series’ sexiest sex scene, not only for its explicitness (“I want you wet….That’s better.” My word!) but also, for lack of a better phrase, for its sensual solipsism. Fucking this dude is just part of the job, but when Elizabeth strikes up this genuine sexual connection with him, her life’s work is momentarily shut out. The act seals its participants inside a vault of their own, and their bodies, pleasures, and desires are its sole contents.

A subsequent visual callback to the Jennings’ car and garage drives the point home (no pun intended). When Elizabeth parks, she’s alone, with neither Philip nor Paige in the passenger seat. She sits silently, and judging from her face not happily, thinking of what she just experienced. Slowly the lights switch off, inside and outside of the car, erasing its secure boundaries with darkness that provides an enveloping vault of uncertain depth and security. She can’t be found in there, but she doesn’t know where she is either.

It’s only when she’s presented with the key to a literal locked door—an empty hotel room where her manager lover wants to have another assignation—that she finds herself again. Turning him down (raise your hand if, like me, you thought she’d head straight for the Up elevators), she returns home, enters her bedroom, stares at her sleeping husband, strips naked, gets in bed, and goes down on him, attempting to reseal the the protective shield that normally surrounds them. Though she may be unaware, it doesn’t work: Philip stares at the ceiling as she performs the act, his mind elsewhere.

But where, exactly? When she wakes up the next morning, she finds him awake already, looking at her. “I think I found a way for you to see your mother,” he tells her out of the blue, referring to a hoped-for trip to visit her dying mom that is completely against the rules to take. But their conversation is interrupted when Paige breaches its confines, entering the bedroom where, in screentime if not in realtime, a tremendously private act had been performed just a minute ago.

The resultant vibe is uncomfortable, intrusive, and Paige senses it: Despite getting an honest answer to her direct question about what they’d just been discussing—or perhaps because of it, given that Elizabeth explains she can no longer see her mother; that door has been shut against her forever—Paige leaves. At first, she leaves the door open, the camera peering through like a bank robber might after he’s blown that big round door wide open, the riches within vulnerable and exposed. But then Paige thinks better of it and reenters the frame, closing the door behind her. She broke into the vault of secrecy that defines her parents, yes, but she doesn’t like what she’s found. She’ll never be able to turn that lock and seal up those secrets again. 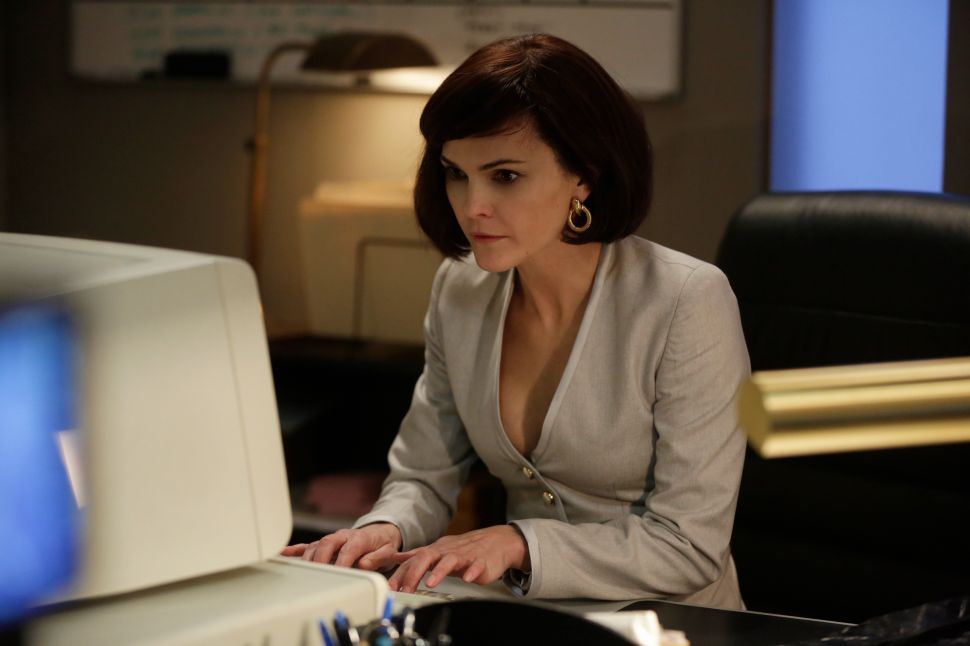