“I feel like shit all the time.” So says Philip Jennings in “March 8th, 1983,” the season finale of The Americans—and that’s before he murders a man whose prize possession is an adorable toy robot collection. Philip is talking about Annalise, the woman he and Yousaf both had a long-term sexual relationship with before Yousaf killed her and they stuffed her broken naked body in a suitcase. But he could be talking about almost anything he did this season: semi-seducing a teenager; driving a woman he tricked into loving him to the brink of collapse; inducting his daughter into a lifetime of danger and duplicity. Philip has a horrible fucking job, but none dare call it evil. None except someone equally horrible.

Ronald Reagan’s “Evil Empire” speech, delivered on the date that gives the episode its title, is the act of rhetorical violence this season finale uses as a substitute for the physical kind. It’s a skincrawling suck-up to evangelical Christianity, and a gobsmacking exercise in false equivalence between birth control and Stalinism, delivered by a grown-ass man who cops lingo from Star Wars and whose hunger to refer to teenage girls who have sex as “promiscuous” is as self-evident as his hypocrisy on this point is well-documented.

But The Americans juxtaposes this address, which we sophisticates in the 2015 New Golden Age of TV Drama recognize for the religious and chauvinistic fanaticism it is, with the intimate and heartbreaking and damn near identical characterization of the Soviet Union and its agents by a teenage girl. Paige Jennings echoes the Leader of the Free World’s condemnation of the USSR when she calls up her own evangelical audience, Pastor Tim, and is born again in the truth: “They’re not who they say they are. They’re not Americans. They’re…they’re Russians.” Dun dun dunnnnnnn!

Ironically, Paige has been driven to this desperate act by a maneuver designed to steer her away from it. In an attempt not only to further draw her into The Cause but also to give her an experience, however brief, of the extended family of which her parents’ activities have robbed her, Paige travels with her mother Elizabeth to West Germany, where Communist agents produce her dying grandmother. It’s a heart-healing family reunion for Elizabeth, but all it does for Paige is make her wonder why a reunion was required in the first place. “I don’t get how she could let you leave like that,” Paige tells her mom on a sleepless night. “Basically say goodbye forever. Would you let me do that?” Elizabeth says no, but there’s no reason to trust her at all. “I don’t know if I can do this, Mom,” Paige tells Elizabeth upon their return to the States. “To lie for the rest of my life? That’s not who I am.” In response, her mother doles out reassurances that feel as false as the harsh florescent lighting of the airport arrival zone in which they’re uttered.

The elder Jennings woman remains oblivious to her daughter’s crumbling resolve even as she warns her husband’s about his other wife’s. On the night of Reagan’s speech, which is also the night of their homecoming from Europe, Philip tells her he’s “taken care of” his phony spouse Martha’s problem at her FBI job, framing the man he murdered for bugging the office. Elizabeth warns him he should tell Martha himself before she finds out about it on her own: “A woman like that, with this on her conscience? I don’t think you’re seeing things clearly.” Lady, you’ve just described your own child.

Gender aside, she’s described her husband as well. Philip is taking EST courses behind her back, including the hilariously named “graduate sex seminar.” There, with slogans like “Take responsibility for your own sex” and “Communicating about sex is communicating about you,” he’s striking up an illicitly innocent intimacy with Sandra Beeman, the estranged wife of their FBI agent neighbor Stan. “What if you and I agreed to just tell each other everything?” she asks him. “No secrets. Just…like an experiment.” Somehow, this naked plea for connection is the hottest scene of the season, despite the total absence of anyone’s bare ass.

“I don’t really know if I can do that,” Philip responds—but he returns home to try just that. He pulls Elizabeth aside, tells her that murdering the FBI employee with the toy robots was hard for him. He tries to describe how he’s starting to feel about what he does, he stammers, he can’t quite get it out. And just when he’s about to: “Hold on,” Elizabeth interrupts him, moving toward the televison on which the President speaks. “We should listen to this.” The personal is jettisoned in favor of the political—a decision that’s as personal as it gets. Philip is left alone with his thoughts, Elizabeth with hers. And as their daughter rats them out to her pastor, Ronald Reagan tells an audience of nothing but pastors that people like the Jennings “are the focus of evil in the modern world.” Two out of three Jennings, at least, appear to agree.

Many of the guns The Americans loaded in its third season failed to go off in its final episode. The Russian double agent was exposed quietly. Stan Beeman’s scheme to rescue his imprisoned lover Nina quietly paid off in the form of his free reign at the Bureau. Nina herself reached an understanding with the scientist she’d been ordered to spy on that didn’t result in trouble for either of them. Martha wasn’t murdered for knowing too much. No, all that happened was that three members of a family have found themselves completely adrift from one another, in a way that will almost cause one or more of them to drown. This kind of confident restraint is rare on television, even now. Thus The Americans ends its third season as one of the very best shows on the air. 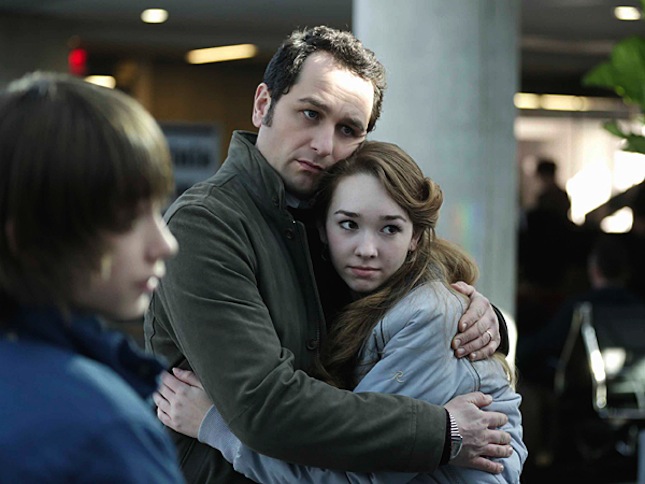