In The Comedians, comedy legend (Crystal) is reluctantly paired with an edgy, up-and-coming comedian (Gad) on a late-night sketch comedy show. The mockumentary offers a behind-the-scenes look at their attempt to launch The Billy & Josh Show amid network struggles and creative strife.  Joining them in this venture are a cast of eclectic characters, including anxiety-ridden producer Kristen (Stephnie Weir), overeager head writer Mitch (Matt Oberg) and sardonic production assistant Esme (Megan Ferguson).

Executive Producer Ben Wexler explains that fellow EP Larry Charles and Crystal were onboard immediately, with Crystal suggesting Gad for the pivotal role of his partner. “I think Billy had seen Josh in [the Broadway musical] The Book of Mormon and loved him. So we sat down with him one day for something like two hours, just shooting the shit and joking around. He left the room and we looked at each other like, ‘yeah, this is the guy.’ He has this incredibly winning, likeable, vulnerable, yet sort of cocky hilarious attitude, and we felt he would play really well off of Billy and I think we were absolutely right.”

Wexler absolutely believes that pairing the two is a genius move, especially given where they are in their respective careers. “Well, Billy certainly has nothing to prove, he’s accomplished so much and I think we’re catching Josh as his career is accelerating. He’s on his way to bigger and bigger stardom. He’s just so talented. After that first meeting, we knew that their chemistry would be fantastic on screen, and it really is.”

Working with a comedy legend like Crystal was a bit off-putting at first for Wexler. “The first time meeting with Billy was really a little bit thrilling because, well, I’ve been a huge fan of the guy since I was 11 years old. My parents made me emcee my sister’s Bat Mitzvah when I was 14 and all I did was Billy Crystal impressions. He’s a huge reason why I got into comedy, and I think it’s like that for Josh as well. I think there’s just a little element of it when you’re starting where you’re thinking ‘this is really cool. I’m sitting here with a guy who’s meant a lot to me for a long time.’ It’s also really fun when he winds up being everything you want him to be.”

The banter between Crystal and Gad on The Comedians seems to come so naturally that one has to wonder how much is scripted and how much is improvised, to which Wexler explains, “We start with a full script for every episode, but our set is such that the actors are very free to take whatever liberties they need. I would say it’s truly hard to put a percentage on it because it changes from one episode to the next how much is improvised. The cast knows what we’re looking for is a scene that works, more than we’re looking for fidelity to the written word. Both of these guys kind of have an eerie, freakish sense for how to make something funny so we just let them do that.”

Crystal and Gad are extremely self-deprecating in the series, something Gad is clearly ok with, says Wexler. “Josh came to me early on and said, ‘I will make fun of myself as much as you want and I encourage you to make fun of me.’ He was very up for all of it.” But Wexler clearly knows that there some things that are off limits, although not quite specifically what those things are. “I almost sort of see it as my job to find where that line is, because you do want a certain level of discomfort I think to keep it funny. With Billy, I try to be really respectful of him, and try to keep him, maybe at the edge, but still within his comfort zone.”

Knowing that both Gad and Crystal are playing versions of themselves, Wexler found fine-tuning their onscreen personas a bit challenging especially when it came to Crystal. “In a world where you have people like Larry David and Matt LeBlanc and they’re playing really funny versions of themselves, there’s this certain sophistication on the part of the audience. They know these guys are playing a certain variation of themselves and Billy gets that. With him it’s a little different because he’s such an iconic personality and people feel like they really know him after all these years. He understands that the audience knows he’s in on the joke, whatever we do. He has strong opinions sometimes on how he wants to portray himself, but he’s also been really brave about tweaking his persona to make everything as funny as possible.”

The series, wanting to be relevant and timely, incorporates some topics into the comedy sketch bits of The Billy and Josh Show that might be considered controversial. “We absolutely want to try to push the envelope,” admits Wexler, ”but it’s more like you can just tell when something has crossed the line from being funny into being nasty and we don’t want to do stuff that’s nasty because I don’t think it’s who we are.”

Wexler confided that he did uncover a few unexpected revelations while working on the series that he wants to share with everyone. “If there is a God, I think Stephnie Weir (Kristin) will be a huge breakout star from this. I knew she was good, but she’s really off the charts funny in this. In every moment she’s unpredictable and she has this skill as a performer to be able to portray someone who may or may not be able to keep it together for the remainder of the scene. She’s been the most pleasant surprise.”

Another thing that truly stunned Wexler was the ease with which the process of making the series has been. “Once we were in production. I just felt like every time a problem came up, somebody had an answer for it, and I think that’s because we had done the work to make the show fundamentally sound before we starting shooting. Honestly, I’m not making this up. It’s been the greatest professional experience of my life. I love every minute of writing this show. It’s always a tough job to be a showrunner, but this is really gratifying. This is a show that I’m incredibly proud of.”

To that end, Wexler, given the opportunity to address his potential audience directly, quipped, “I said to a friend the other day that for the first time in my career, this is a show that I like so much that if it’s rejected by the American people I really will feel like it’s a personal rejection.  It’s a little scary to admit that, but it’s actually how I feel.”

Making a final plea, he adds, “I think you have to be a little bit crazy to try and launch a show in this atmosphere. There’s just so much stuff out there now. Having said that, I think there’s room for a really good comedy like this one. I think people respond to stuff that’s genuinely funny and feels well made to them. And, I actually think this show in particular is doing something that nobody else has tried before, which is to take someone who is of a legendary status, Billy Crystal, and watch him play a version of himself. I hope there’s a certain fascinating element to that that draws people in.”

In closing, Wexler explains the intention behind season one of the series, saying, “This is a show about trying to get a show on the air, and this season is meant to tell that story. We wanted to make an arc that you could watch week to week, or binge watch if you like, and have it feel very satisfying and I really think we’ve done that here. Does ‘The Billy & Josh show’ make it to air? I’m definitely not going to give away. You’ll just have to tune in and find out.” 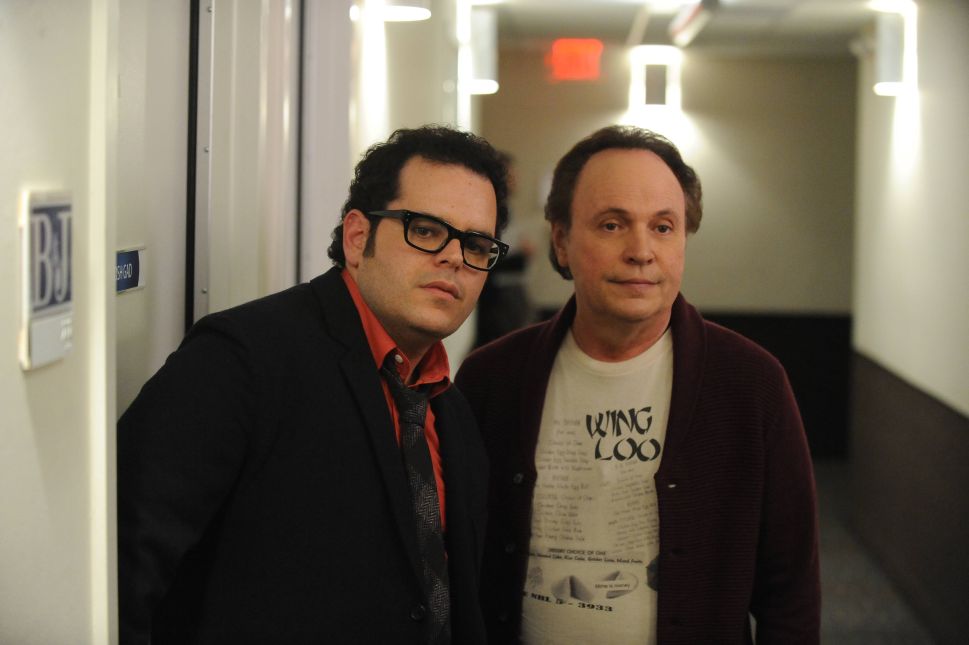