The 2016 presidential election will either be a nonevent or the most significant since the New Deal swept FDR into office in 1933. Hillary Clinton, the presumptive Democratic nominee, is already working hard to assure voters that her campaign will be as stridently bland as possible, even as Republicans offer up a platter of dingbats and wingnuts, each of whom promises to dismantle the First Amendment, institutionalize discrimination, turn their backs on the fallout from the U.S.-led invasions of Afghanistan and Iraq, and ransack the environment in the name of the US economy, by which they mean the 10% or so of Americans who have benefited from the recovery.

The simple, sad reality is that a Clinton presidency is unlikely to do the country—or the world—much good, but a Republican presidency will almost surely be a disaster. But let’s talk about that when it happens. Because really, nothing the candidates do between now and Nov. 1, 2016 will be of any significance whatsoever. (Don’t believe me? Write down who you’d vote for if the election were held today, then pull your answer out next November. Yeah. I thought so.) So let’s focus on the real battle in the coming campaign, which has nothing to do with the White House and everything to do with America’s soul. Activists, pundits, demagogues, academics, and pretty much anyone who can get their face in front of a camera or fingers on a keyboard have decided it’s time to clarify the legacy of the Declaration of Independence and the Constitution—to declare, once and for all, the true political nature of the United States.

The debate turns on a subtle yet crucial distinction: is the US a fundamentally conservative country sheltering a pervasively naive liberal impulse, or is it actually a liberal country with a persnickety conservative streak that just won’t die? Does the core of our national identity, in other words, lie in a belief in plurality of expression and compassion for the under-privileged and oppressed, or does it instead stem from puritanical religious fervor and the impartial wisdom of the marketplace? And is the goal of this grand experiment in democracy a genuinely free, mobile society unbound by assumptions about class, race, gender, and sexual orientation, or a trickle-down plutocracy in which the success of an unfettered handful of billionaires leads to prosperity for the masses?

Conservatives will argue that the United States is the melting pot and land of opportunity, where common men (and women!) of all stripes gathered to make a fresh start in a country that rewards individual effort and merit. Liberals counter that the US has consistently exploited its workers, beginning with the half million or so immigrants who came to these shores as indentured servants (not to mention the 300,000 brought here as slaves) and continuing through two and a half centuries of low wages, long hours, and unsafe working conditions.

These huddled masses, liberals contend, came together to form a pluralist state, which, though dominated by Protestants, has consistently worked to remove Christian doctrine from its political and cultural institutions. Conservatives laugh at this revisionist naiveté. Our country is a de facto if not de jure Christian polity, they’ll remind you, whose large-heartedness is reflected in the religious freedom enshrined in the Bill of Rights. And this magnanimity extends to people who don’t share the Founding Fathers’ Anglo-Saxon roots: lest we forget, the Constitution’s authors refused to protect slavery within its clauses, and the 19th century was essentially a long push toward the Civil War and the Thirteenth Amendment. Liberals dismiss this dissembling, pointing out that if the Founding Fathers didn’t write slavery into the Constitution, they had no qualms about valuing a black life at three-fifths that of a white, and the upshot of the Emancipation Proclamation was a century of Jim Crow in the south and overcrowded, unsafe ghettoes in the north. Yes, but Barack Obama—and Condoleeza Rice and Colin Powell and Clarence Thomas. Yes, but Michael Brown—and Eric Garner and Tamir Rice and Walter Scott.

And so on: we call ourselves isolationists, yet the Monroe, Truman, and Bush doctrines define American foreign policy. We’re a nation of immigrants who fight to keep new arrivals out. We claim to be the world’s policeman, yet dozens of leaders, from Patrice Lumumba to Salvador Allende, from Sukarno to the Castro brothers, from Abd al-Karim Qasim to Saddam Hussein, have been the target of US-sponsored coups and assassination attempts. We say we want government to get out of the way, yet are more than happy to sacrifice our civil liberties—or the civil liberties of individuals or groups we don’t trust—in exchange for “protection” from some nebulous threat or other.

Pick your quintessentially American value, and I can promise you another, equally typical stance to contradict it. Indeed, in some ways the debate feels like a distinction without a difference. For almost 250 years the genius of the American system has been not just to accommodate such disparate conceptions of itself, but to embrace them, viz., Whitman’s famous declaration: “Do I contradict myself? Very well then I contradict myself, (I am large, I contain multitudes.)” But as the Civil War showed us, the need to declare—to trumpet or hide behind—a definitive national ethos is crucial to our sense of ourselves as Americans, whether we identify as right- or left-wing.

These terms, with their physical origins in France’s National Assembly, have conditioned us to think of this kind of political face-off as an us-against-them proposition, when the more complicated reality is that conservative and liberal values are the warp and weft of every American heart. The radical activist who wants to criminalize hate speech has no less disregard for the First Amendment than the right winger who wants to make flag-burning a crime. The Tea Partier who thinks we should dismantle entitlements because individuals have a right to lives of their own making is arguing the same principle as advocates of marriage equality and a woman’s right to choose. We call ourselves laissez-faire capitalists, yet supported a bailout of financial institutions to the tune of $29 trillion. We vilify socialized medicine, but God help the politician who tries to cut Social Security, Medicare, and Medicaid, which account for nearly half the federal budget. We advocate affirmative action but decry racial profiling. We desegregate schools and force men’s clubs to admit women, but call for safe spaces for women, people of color, and members of the LGBT community, free from the microaggressions of straight white men.

“Truth,” EM Forster wrote in Howards End, “[is] not halfway between anything. It [is] only to be found by continuous excursions into either realm, and though proportion is the final secret, to espouse it at the outset is to insure sterility.” For much of our nation’s history we embodied this idea of Forsterian proportion—not compromise, let alone centrism, but accommodation and balance. The ideas of the far right and far left were always part of the national conversation—at its peak in the 1920s, the Ku Klux Klan claimed between four and five million members, even as another million Americans voted for Eugene Debs—and our laws and policies reflected this in a mishmash of prejudice and tolerance and charity and greed that produced a cultural and economic vibrancy that was more than a little schizoid, but also remarkably stable.

Republicans and Democrats alike have lost this sense of balance, the former hijacking the government whenever they see themselves contravened, the latter proffering lowest-common-denominator policies so watered down as to make substantive change impossible, while the more progressive left finds itself settling a little too comfortably into the role of finger-wagging scold. Perhaps that’s because it knows this country will never be the beigey gruel of egalitarian sameness it seems to yearn for, just as we’ll never yield to the religious plutocracy the right wing dreams of—which fantasies, when you step back a bit, look like remarkably similar utopias where consensus reigns only because free will and individuality have magically ceased to exist.

Our elected officials are supposed to represent the best of us. Instead they’ve become caricatures of ourselves at our most boring and boorish. I’d say we only have ourselves to blame, but if Bush v. Gore showed us anything, it’s that our democracy is nominal even as the rule of law still holds. This is a particularly dangerous position for any free society to find itselfin. With a few twists of the screw in one direction or the other, it’s easy to imagine our country sliding into the inertia of anarchy or the cult-of-no-personality practiced by Vladimir Putin. It’s time to recognize that we are fighting a war we can’t win because the enemy is inside each one of us, and if there’s any hope for American democracy, it’s in learning not just to tolerate these contradictory visions of our destiny, but to accept them for what they are: reflections—projections—of ourselves. 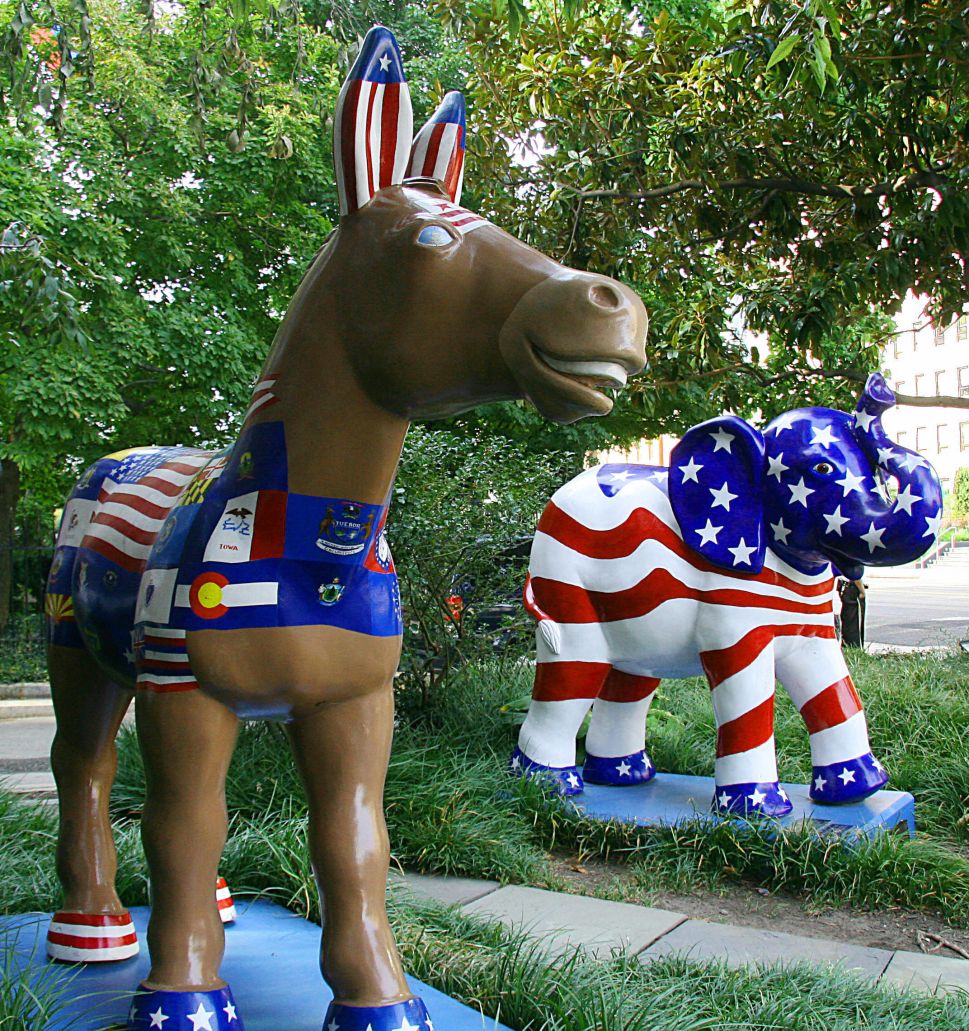