Or, as Eli succinctly puts it, “life…sucks.”

Life certainly seemed to suck for pretty much everyone at Florrick Agos & Lockhart this week. It probably sucked most of all for Alicia, who, in the wake of voter fraud allegations, teams up with a high-powered civil rights lawyer to fight off a potential recount. We’ve watched Alicia swear up and down she wasn’t running for State’s Attorney, then run half-heartedly, then run hard, then get in bed with shady people to get over the finish line. Now that she’s over the finish line, she’s being told to withdraw in order to preserve the Democrats’ supermajority in the state legislature.

It’s a hard sell this week for The Good Wife to convince us that being State’s Attorney meant this much to Alicia, but I almost bought it, mainly because Julianna Margulies is flawless. Most of this week’s main story boiled down to Alicia being manipulated by the party bosses (all men) and by the lawyer she trusted to help her, so when she finally breaks down in Peter’s arms, it makes sense. (Also, crying in elevators is what Alicia does best.) But I’m frustrated as a viewer because I never got the sense that she really wanted any of this in the first place. I don’t know what being State’s Attorney means to Alicia, and yet I’ve had to sit through nearly an entire season of her going for it, only to have it snatched away before she can even start doing it. Yes, I get it: politics is a dirty game, especially in Chicago, where corruption has always been the name of the game. But did the show really spend 19 episodes taking us through this campaign for the sole purpose of making this insanely cynical point? I’m not sure this campaign storyline taught us anything about Alicia. I learned more about Alicia through the leaked emails than through this season-long campaign story. Mainly, I learned that she and Will sexted like old people. I don’t know who I’m more embarrassed for – Alicia, or Grace. Can we count how many times Grace has found out gross things about her mom on the Internet? She probably says a prayer every time she logs on to Chumhum.

And then there’s the Diane/Kalinda story, in which Diane faces real jail time for using Kalinda’s faked metadata to get Cary acquitted. As it turns out, ASA Geneva Pine only cares about prosecuting Diane for the same reason she wanted Cary: it’s all about Lemond Bishop. Those of you who’ve read my prior recaps know that I am a huge fan of this story because of its potential to give Kalinda a fitting sendoff. But I have to admit that I was disappointed at continuing to hear Bishop’s name bandied about. I just don’t know why the show cares so much about him. He strikes me as the kind of character that gets trotted out whenever the show wants to put people in jeopardy. Why did the firm take him on as a client in the first place if all he ever does is threaten to kill them, all the time? I was weary of Bishop ten episodes ago, and I remain weary of him, and he’s not even in this episode. I would be very okay with never hearing his name again.

At any rate, the whole thing makes Diane really tired. Like, really tired. Did you see that scene in Finn’s office, where she’s nearly faceplanted on his desk? Diane’s had a very hard time of things between being nominated for the Supreme Court (and then not), being pushed out of her firm, joining Cary and Alicia’s ghetto firm, and fighting tooth and nail to reclaim her office space (and her dignity), only to now be forced to testify against snazzily dressed drug dealers. I wanted a scene between her and Kurt, drinking whiskey at home, where she just got to let off steam about all of it. I wanted Kurt to make her a bubble bath so she could just soak.

In the end, though, it’s Cary who decides to offer himself up as state’s evidence, which is exactly the thing the SA’s office wanted from him twenty episodes ago. He’s doing it to save Kalinda, presumably, and it’s all very noble, but I’m not sure the show has put as much legwork on the Cary-Kalinda relationship as it thinks it has. When one of the two of them is in peril, we’re reminded that they have some sort of deep emotional bond, but it’s a bond we don’t see otherwise. I’m not sure where the show is headed with this story in the last three episodes of the season, but for my money, I hope Kalinda gets a better exit than Will did. I don’t know if I can handle two characters being bumped off back-to-back. My little recapper heart would break from the stress of it. 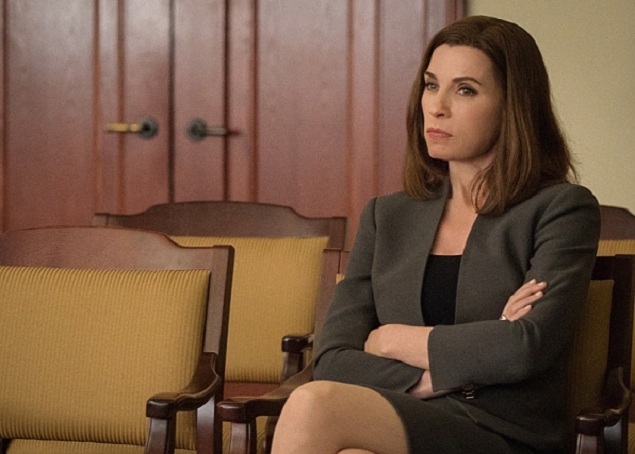