Made two years ago and held up for unknown reasons, a horror flick called The Harvest is a pretty good example of what talented actors have to endure these days to keep their careers going. Nothing wrong with a little gore as long as the result is a few goosebumps. This one is no scarier than running out of ink in the middle of a midterm exam.

Maryann (Natasha Calis), a young girl orphaned by the loss of her father, is sent to a remote country village to live with her kind, benevolent grandparents (Peter Fonda as a bespectacled, gray-haired old grandfather proves I’m getting too old for this job). Wandering through the woods, she comes across a white house surrounded by dead cornfields where a lonely, bedridden, paralyzed boy named Andy is confined to an upstairs room, looked after by his father, a male nurse (Michael Shannon), while his mother, a doctor who works long hours at the emergency room of the hospital in town (Samantha Morton), is away all day. The lonely, home-schooled boy (Charlie Tahan, who survived the planet plague with Will Smith in the 2007 I Am Legend), is delighted to make a friend, but terrified of what will happen if his parents find out. No wonder. The mother is hostile, emotionally distant and a fiend with hypodermic needles.

At first, her concern for overprotecting her son against falling and injuring himself seems like an almost understandable neurosis on the part of parents doing everything they can to save their only child from dying of kidney failure. But when it extends to physical and mental cruelty that impedes his progress (she smashes his TV set with a baseball and chops down his favorite cornfield outside his window), the tale turns creepy. Then sinister, when Maryann looks up a story at the library about a local boy who was kidnapped and discovers another child in the basement, connected to tubes and turning green, with Andy’s parents performing open-heart surgery with their own hands!

Holy Frankenstein! What are Andy’s parents up to? Is Andy really Andy? And the boy in the hospital bed in the cellar—who is he? It’s up to you to find out. The answers pale in comparison to the much more urgent questions, like what are Michael Shannon, Samantha Morton and Peter Fonda doing here? Weakly written by Stephen Lancellotti and directed with more polish than it deserves by John McNaughton (whose 1986 thriller Henry—Portrait of a Serial Killer was the real deal), nothing makes much sense this time around, including the title. There is no harvest in The Harvest. 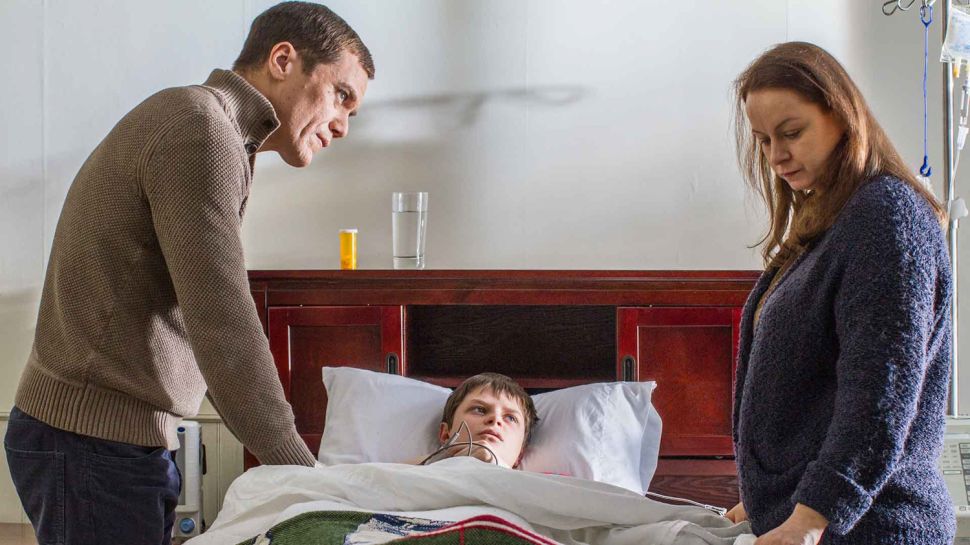