Nobody wants to spend three or four hours of their life sitting through a mediocre opera performance, especially when you consider what tickets cost these days. But mediocre means “average,” so, statistically speaking, if you go to the opera a lot, it means you’re going to be confronted with middling performances more often than not. You have to kiss a lot of frogs, right?

So when two very different productions of Italian opera last week turned out in reality so much better than they’d looked on paper, that was more than a surprise: it was something of a revelation.

The revival of Verdi’s grandiose tragedy Don Carlo at the Met on March 30 ranked low on my list of priorities for the spring season. When the Met last produced this opera two seasons ago, it was a sloppy, boring mess, its six starring roles mostly undercast and, worse, Lorin Maazel conducted the glorious score as a set of variations on a dirge.

Most of that cast returned this year, the only major upgrade being the conductor, Yannick Nézet-Séguin, who was a known quantity since he had led this production’s premiere run back in 2010, a precise and passionate performance.

Mr. Nézet-Séguin’s conducting was more than merely excellent on Monday’s opening night of this revival: it was glorious. He approached the task of interpreting Don Carlo not as a star soloist but rather as a superb team leader, inspiring solo singers, chorus and even the sometimes recalcitrant Met orchestra, to give their very best. His conducting has a self-effacing quality: he has no “trademark” like, say, Daniele Gatti’s rapturous freedom of tempo or Christian Thielemann’s architectural precision. What you hear is not Mr. Nézet-Séguin, but simply Verdi, perfectly focused and displayed in the most flattering light.

At several key spots in the opera, though, he revealed a distinctive and fascinating musical sensibility. For instance, in the “Io vengo a domandar grazia alla mia Regina” duet, the duty-bound Queen Elisabetta reveals that she still has tender feelings for her stepson Don Carlo. The hypersensitive young man falls into a faint, a moment Verdi depicts in the orchestra with a sudden key change, murmuring strings and yearning woodwind arpeggios. Mr. Nézet-Séguin found something new and disturbing in this lush passage: the music seemed to shudder and throb erotically like an outtake from Tristan und Isolde.

With this maestro’s uncanny knack for partnering with singers, phrasing and dynamics always sounded spontaneous but never imprecise. The Elisabetta (Barbara Frittoli) is a holdover from the Maazel revival, when her frayed voice verged on the unlistenable. Mr. Nézet-Séguin, though, latched on to her exquisite musicality instead, veiling her vocal flaws with slightly quicker tempi and sensitive softening of the dynamics. Even in the majestic last act aria “Tu che la vanità,” a piece Ms. Frittoli really shouldn’t attempt any more, she and Mr. Nézet-Séguin managed to create something marvelously poetic.

Under the young maestro’s guidance, the veteran bass Ferruccio Furlanetto found a fresh, sharp bitterness in King Philip’s music, and Dmitri Hvorostovsky sang with what is for him unusual introspection as Carlo’s idealistic friend Posa, without ever dimming the luster of his sleek baritone. (I don’t think I’ve ever heard a more perfect note than his high F toward the end of the first prison aria, a shimmering mezzo piano pearl.)

If Ekaterina Gubanova’s mezzo sounded a trifle light for the fiery Princess Eboli, the lithe beauty of her tone and her glittering coloratura in the “Veil Song” evoked the character’s requisite glamour. Even the usually unlistenable James Morris somehow got his voice in line for his single scene as the Grand Inquisitor, performed with a repose born of utter confidence.

The title character is a difficult part to bring off, Hamlet as an entitled teenager, and underwritten musically. The Met fielded Yonghoon Lee, a tall, handsome man with a big, handsome tenor who, as of this hearing, remains amazing raw material in search of some sense of the meaning of what he’s singing about.

Less convincing was Nicholas Hytner’s dour production, in which the singers are mostly left to their own devices. Ms. Frittoli improvised a few elegant arm gestures and Messrs. Furlanetto and Hvorostovsky clutched their respective breasts with vigor. But as a theatrical enactment of a melodrama of adultery, betrayal, political revolution and multiple assassinations, this Don Carlo remained unforgivably polite.

No such daintiness marred a very different opera company’s presentation later that week. Saturday night the LoftOpera troupe invaded LightSpace, a photographers’ studio on the edge of Bushwick, for a performance of Donizetti’s melodrama Lucrezia Borgia that, as opera should do but rarely does, left blood on the floor.

I should clarify that the blood in question was purely metaphorical, because this company’s shows get so theatrically vivid that at the crest of one the production’s several wild party scenes, the heroine flung her wine goblet around so violently that the front row got splashed. Nobody complained, though, because this Lucrezia Borgia was both terrific fun and, as conducted by  Sean Kelly, musically respectable as well.

Director Laine Rettmer shifted the lurid action  of  the  1833 opera from Renaissance Italy to a nightmarish modern day, with nobility transposed to mob family. The vengeful Lucrezia became a 40ish blonde bombshell in glittery platform heels and a spangled mini-dress; the young stranger Gennaro, to whom she is so mysteriously attracted, was a stoned club kid in a velvet track suit.

The action transpired in a rundown party space, surrounded on all sides by the audience on benches and even sitting on the floor. When Gennaro’s friends “insulted” Lucrezia, the violence turned physical, bordering on gang rape. For Lucrezia’s outraged entrance in the next scene, soprano Joanna Parisi overturned a table more recklessly than even Teresa Giudice might dare.

In fact, Ms. Parisi gave a superhuman performance in every sense of the word, lurching recklessly and even falling flat on her face several times in those skyscraper Louboutins. Under the circumstances it’s remarkable she could sing at all, but the miracle was that she sang so well, in a big, vibrant spinto with confident flexibility and a rich, earthy chest register.

How a tiny company like LoftOpera
finds such quality voices is beyond me, but I’m not complaining: better just to praise Nikhil Navkal for his silky tenor and pouty bad-boy looks as Gennaro, who (spoiler alert!) turns out to be not Lucrezia’s boy toy but instead her bastard son. (Take that, David Chase!) Even better was Matthew Anchel, a granite-voiced basso cantante within the role of the mobbed-up Duke of Ferrara.

In Donizetti’s wide variety of important supporting roles for men, LoftOpera cast a sterling group of young artists, strong-voiced and visually believable as a band of thuggish teens.

Despite a few rough edges dramatically and musically, this show is simply terrific, from the spunky 24-piece orchestra to the scrumptious artisanal beer sold before (and during) the show. Even the mighty Met should be watching and learning from LoftOpera. 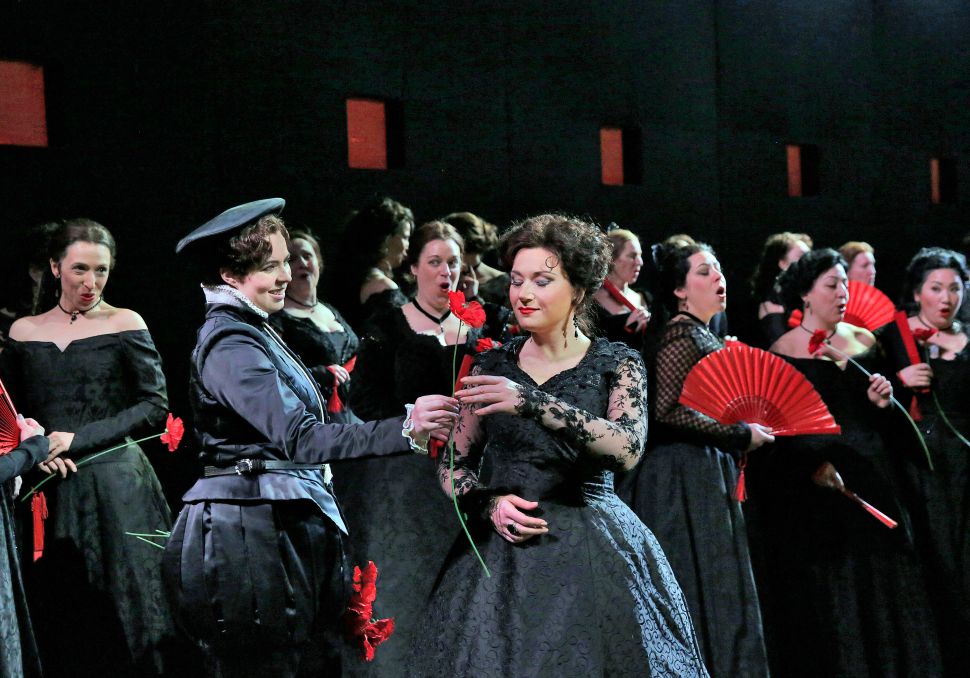