You what I’d totally love to hear about for the 487 billionth time? The drama surrounding the sex rumors Janet may or may not have started about Gamble. Lucky for me, it’s the main focus of this episode, too! *twitches* *dies*

This week’s episode begins with the “Grand Final day” for the “Aussie Football League.” Can someone translate all those sports words and leave it in the comments section? Thanks! Anyway, the women are all congregating here because, if you’ll recall from Bruce’s sexy construction outfit a couple of weeks ago, Chyka and Bruce were involved in designing one of the venues for the event.

You know there’s going to be trouble right from the get-go, because Janet and Gamble are supporting opposite teams. Foreshadowing, anyone? But for now, the main source of drama is actually Lydia. She’s still super pissed about last week’s dinner, when Gamble and Gina giggled as she wept about her dead son. I mean, fair.

After Lydia calls her out, Gamble insists she wasn’t smirking. “I have a heart as big as Texas,” she says, which strikes me as funny because I didn’t think Gamble had heard of America.

Meanwhile, Janet pulls Pettifleur aside for a private convo. The ladies are headed on a trip to Gamble’s hometown of Sydney this week, and Janet’s worried, totally justifiably, that the whole thing might devolve into a drama-fest. Pettifleur promises to help “put a lid on it” if it does.

“It’s gone on for too long,” Pettifleur says of the fight between Janet and Gamble. AMEN, SISTAH.

As Gamble packs about 70 sparkly evening gowns into a suitcase for her three-day trip to Sydney, she explains to Rick how she wants the trip to be fun, and for everyone to be happy.

“I don’t want to be sexist,” Rick says, “but sometimes women carry these animosities a little too far.” Ugh—I want to be annoyed by this comment, but Rick just looks so damned cute in his little shirt and his little chair with his little dog. Love u Rick.

Meanwhile, Jackie visits Chyka at her perfect home in her perfect backyard to talk about planning the perfect hen’s night (that’s “bachelorette part” in Australian-speak) for Gamble. Chyka, perfect lady that she is, suggests pleasant ideas like karaoke and having the party during the daytime. She also says there shouldn’t be strippers.

“Well, she doesn’t want it to be tacky,” Chyka says.

“We can certainly have a classy stripper,” Jackie tells the camera. “Instead of shaking his ding dong, he can shake his butt.” Well, I guess that settles it!

And now for the trip to Sydney that definitely won’t involve any fighting whatsoever! A bunch of the Housewives couldn’t go, so only Gamble, Gina, Pettifleur and Janet make the trip. Luckily, they’ll be meeting up with wannabe Housewive Lisa Tonkin, as well as Gamble’s sister, who’s literally named Tempest. The foreshadowing on this episode is unreal, you guys.

The women don their shortest, sparkliest dresses and drink champagne in Gamble’s hotel room. Gamble informs them Sydney is “naughtier” than Melbourne—as evidenced by the fact she’s wearing this dress with no underwear underneath:

Gamble does some work for a Sydney art gallery, and they head there to party it up. For some reason, everyone here is carrying animals. Maybe Gamble is right—Sydney is cRaZy!!!

Gamble directs the Housewives to a painting of a semi-topless woman. Surprise—she was the model! Could this be the source of all those sex rumors? I don’t know, because suddenly I’m distracted by the fact that Gina is aggressively grabbing Gamble’s chest. Could Gamble’s proclaimed lesbian crush on Gina be reciprocated? CAN THIS PLEASE BE A SUBPLOT?

But things go south when Gamble’s sister, whose name literally means “violent storm,” enters the picture. It’s all fun and games as Tempest chats about plastic surgery with the Housewives, but then, as suddenly as a firecracker going off, she totally loses it on Janet.

“I don’t think you how wonderful this young woman is,” she hisses at Janet, pointing at Gamble. This is literally 0.001 seconds after she finishes talking about her eye lift. “I’ve known her her entire life,” Tempest continues, “and I don’t think you had any idea how much you upset her when you make up bullshit about her.” But it doesn’t stop there. “YOU DOING THAT SHIT TO HER HURTS ME, AND HURTS HER!” she screams. WELL, THAT ESCALATED QUICKLY.

Janet is so not having it. “I’m totally over being attacked every time I’m in your company,” she says to Gamble, before strutting fabulously out of the gallery.

But wait—Gamble actually doesn’t condone the way Tempest yelled at Janet, and is really sad that Janet’s upset. Gamble follows Janet out of the gallery and chases her down the darkened street—the camera people running after them shakily as though filming The Blair Witch Project: Down Under.

Gina joins the chase, too, and eventually, both of them catch up to Janet. But it’s too late—Janet refuses to return to the party. She gets in a cab and heads back to the hotel.

Back in Melbourne, Lydia, Chyka and Jackie meet at the fancy-sounding Fitzroy Gardens to play a casual game of croquet in dresses and heels. I really must move to Melbourne. When they’re done playing, they sit down for a perfect picnic, perfectly put together by the perfect Chyka.

Lydia does a mean yet humorously accurate impression of Gamble’s voice, and then all the ladies talk about how Gina’s a bit of a gossip. In conclusion, no one likes Gamble or Gina that much.

Back in Sydney, all the women—minus Janet—are spending the day on a yacht. Pettifleur wears a literal sailor’s outfit. “One thing I didn’t want to look like is a dress-up comical queen,” she says. Mission totes accomplished, Pettifleur:

All of a sudden, some really emotional music starts playing, and Gamble makes a speech about how much she wishes Janet were with them on the yacht, and that the problem was resolved. She’s ready to move on, she says. I want to believe ya, Gamby, but you said the same thing at the end of the golf day!

Let’s pop back to Melbourne for a hot second to watch Chyka teach her son, B.J., how to cook dinner. Despite various trials and tribulations, B.J. manages to produce a beautiful-looking breaded chicken dish with some fancy-looking vegetables arranged on top. In conclusion, Chyka’s family is perfect. The end.

It’s the Housewives’ final night in Sydney, and everyone—including Janet, this team—goes to dinner in a neighborhood called “Woolloomooloo.” Unsurprisingly, the topic of the sex rumors comes up again. Can I please propose a new topic of conversation? Why does “Woolloo” have two Ls, but “mooloo” only has one? Why are Janet’s outfits so fabulous? Why would anyone name their child Tempest? Oh god—the dinner devolves into yet another full-scale argument.

Thankfully, Janet proposes they make a pact that no one will bring up the rumors again. Everyone puts their hands into the center of the table.

CAN’T WAIT TO SEE HOW LONG THIS LASTS. 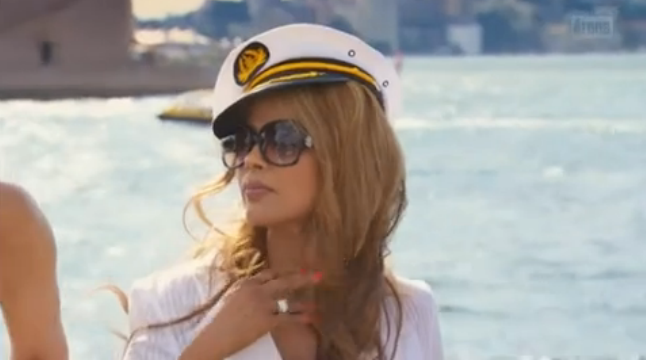