At the start of this week’s episode, Lydia, Jackie and Pettifleur are going shopping on Collins Street: “the Paris of shopping,” according to Lydia. How très, très chic.

The ladies try on clothes—Jackie nixes a fur piece because she “picks up on energies” of the dead animal—but everyone knows shopping isn’t the real reason they’re here. Pettifleur, it turns out, wants to gripe about Gina—how she’s been interrupting her constantly, and even making fun of her accent. Lydia and Jackie agree: Gina’s behavior is, like, not okay. Dun dun dunnnnnn.

And now for the best scene so far this season: Gamble taking her psychotic, indisputably talentless Pomeranian, Cash, to compete in a dog show. What’s more, this isn’t even a run-of-the-mill dog show, where handlers with bad shoes run the dogs around the ring once or twice. This is a special—perhaps uniquely Australian?—brand of dog show, where the dogs have to jump over bales of hay, retrieve toys, and dress up in costumes. I kid you not.

Unsurprisingly, Cash shits the bed on every challenge. At one point, there’s literally circus music playing as Cash goes rogue, and Gamble has to totter around on high heels trying to catch him.

Still, Cash places third out of four competitors—as in, not last.

“I think the reason we got third prize is because fourth prize forgot to blow-dry her hair in the morning,” Gamble theorizes, “and it must be a bit more to do with the full presentation of your team.” Ouch.

On to this episode’s main event! Janet and her son Jake, who’s recovering from being severely burned in a fire, are starting a charitable tea business to help raise money for burn victims. Janet has heard tell of some ~tea master~ in the Philippines who knows, like, errrrrything about tea, so she’s flying out to meet her. Do the other Housewives want to come along?

But before we can head to Manila, let’s knock a few quick things out of the way.

First, remember Gamble’s horrible sister, the horribly-named Tempest? She’s coming to Melbourne to get plastic surgery—something about an eye lift and removing her neck fat, because she “wears scarves all the time.” At lunch, Gamble and Tempest chat about how fab plastic surgery is.

“Cosmetic surgery is really important for people when they’re losing their self esteem,” Gamble tells the camera, sagely. “Feeling beautiful is a wonderful feeling and every woman should have that privilege.” Now, perhaps, is a good time to add that Gamble has spent $90,000 on plastic surgery.

Next up, Chyka and Jackie have to explore a potential venue for Gamble’s hen’s night (read: Bachelorette party). Just like last week, when she suggested they do the party during the daytime, old boring Chyka suggests super lame stuff again. But Jackie has a plan to break Chyka out of her shell: She’s hired three oily, muscly strippers to give them a trial performance!

In a truly shocking turn of events, guess who gets DOWN AND DIRTY with the strippers? CHYKA. While Jackie, actually, is pretty shy, Chyka is all. about. the strippers. I’m not joking. This is way more intense than anything I saw in Magic Mike.

Finally, we have to pop in at that charity poker tournament Lydia’s hosting with cricket legend (lol cricket, amiright) Shane Warne. The only meaningful takeaway here is that the Housewives suck at poker, and Pettifleur thinks Lydia and Shane Warne have “great chemistry.” They’re totes just friends, Lydia insists. K, LYDZ, WHATEVER U SAY.

It’s time to go to Manila! As usual, we’re treated to a series of packing scenes:

Lydia asks her housekeeper, Joanna—who’s from the Philippines—extremely basic questions about the country. Despite having employed Joanna for some time now, Lydia’s evidently never asked a thing about her homeland. “Are there traffic lights?” she asks. Joanna says yes, they have traffic lights in the Philippines. “REALLY!” Lydia exclaims.

Jackie packs for the trip with her stylist, Iyan, who has blue hair and says things like “So. Much. Tit.” I don’t know why we haven’t met Iyan before, but he is FABULOUS and I want him to be on every episode from now on. Thx.

At long last, the girls are in Manila! Remember how we’re gearing up for a Gina vs. Pettifleur show-down? Well, Gina has lunch with Chyka and Gamble and reveals a potentially grave discovery. Pettifleur’s book, Switch the Bitch, basically has the same title as a book in the U.S.: The Bitch Switch, by none other than Omorosa of The Apprentice fame!!! I couldn’t make this stuff up. Anyway, this, along with a number of other reasons, makes Gina wary of Pettifleur’s literary ambitions.

Elsewhere in Manila, Janet, Lydia and Pettifleur go shopping at a pearl store. Uh, didn’t they come here to meet a tea master to help raise money for burn victims, or something?

That evening, the women are drinking champagne on a rooftop, gazing out at the slums of Manila. All of a sudden, Pettifleur gets rull emotional thinking about the squeegee boys she witnessed earlier.

“These boys are out there, they’re not playing Playstation, they’re not sitting behind a computer, they’re actually working, probably to have a meal,” she says, weeping. “It’s very sad, and I feel very fortunate that my children have what they have, and I’m able to provide.”

The Housewives meet for dinner at a restaurant on the 71st floor of a buildling—or the “seventy-oneth” floor, if you ask Lydia. Jackie uses her psychic powers to deduce that Pettifleur is feeling sad, and then Chyka brings up Omorosa’s book, and then before I know what’s happening, the dinner has devolved into a massive fight between Pettifleur and Gina.

Pettifleur tries desperately to explain that she came up with Switch the Bitch all on her own, but Gina keeps interrupting her and saying mean stuff. “Don’t you think the word ‘bitch’ is really derogatory?” Gina asks, apparently forgetting 99 percent of drama in Season 1 revolved around her use of the C-word.

The fight culminates with Gina doing a really mean impression of Pettifleur. It’s awful. I know Pettifleur makes her poor, defenseless housekeeper wrap her individual clothing items in tissue paper, but still, this is too much.

Will the women work out their issues next week? Will anyone ever meet the legendary tea master? Who knows! 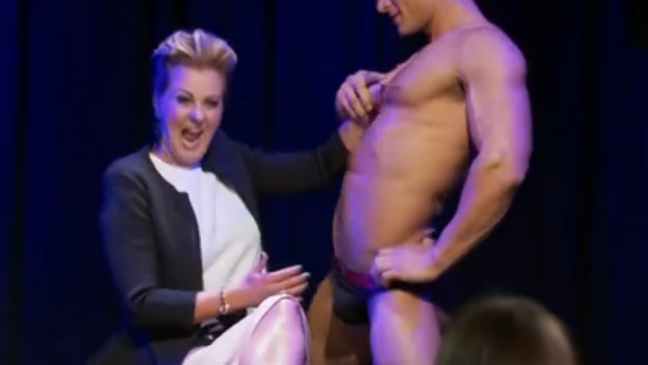