When we last left off, the Melbourne Housewives were one glittery, high-heeled step away from ripping out each other’s throats over dinner in the Philippines—and that’s exactly where we picked up this week.

“Our first meal in the Philippines, it just went from great to so nasty,” Lydia tells the camera.

Pettifleur accuses Gina of making fun of her accent and the color of her skin. Gina says Pettifleur is just “nit-picking,” which is exactly the kind of compassionate response you should give when someone accuses you of racist behavior.

Meanwhile, Jackie is getting really angry listening to Gina. Like, really angry. Here are some faces she makes:

Finally, Jackie explodes. She’s sick of Gina’s lying. She tells Gamble—who’s, like, ready to sacrifice her entire family in exchange for Gina’s undying love—that Gina once called Gamble’s fiancé a “lunatic” on morning TV. Jackie also reveals that Gina had a plan to throw the newbies, Gamble and Pettifleur, under the bus this season.

“I reckon your demons possessed you,” Gina responds to Jackie. Janet, no doubt remembering the godforsaken demon storyline that dominated Season 1, is horrified.

“You are the biggest lying sack of shit I’ve ever met in my life,” Jackie tells Gina.

Finally, Jackie drops the biggest bomb of all: that Gina knew about Gamble’s sex rumors before anyone, and didn’t warn Gamble about them. I know this is supposed to be super dramatic and exciting, but DEAR GOD CAN WE PLEASE BE DONE WITH THIS SUBPLOT.

Thankfully, the next day, it’s time for Janet and Chyka to visit the world-renowned tea master—you know, the whole reason they took this trip to Manila.

I guess I was expecting them to have to crawl through some hidden underground cave and produce a secret password, but turns out the tea master is just a super stylish lady named Renee Sebastian who lives in a gorgeous mansion.

Renee helps Janet and Chyka blend some chai for the charitable tea line Janet is starting with her son. This involves crushing spices with a stone; Janet says she’s pretending the spices are Gina.

Lydia wants to warn Gamble about Gina—to tell her Gina might not be as good of a friend as Gamble thinks. “Gina does put people down in she doesn’t really want to know them—I don’t mean that in a nasty way,” Lydia says, most definitely in a nasty way.

Meanwhile, Pettifleur and Jackie have a private convo in Jackie’s hotel room. Both of them are furious about Gina’s behavior last night. “I’ve never met a person who can lie to your face and have actually no emotion,” Jackie says.

Meanwhile, remember Lydia’s housekeeper, Joanna, who Lydia may or may not have kidnapped/be in love with? Lydia is going to meet her parents, who live in the Philippines! Joanna’s parents are so excited to see Lydia, and to thank her for taking care of Joanna all these years. Oh shoot—wait—this is actually really emotional. I hate it when reality shows make me feel feelings. Lydia also meets Joanna’s nephew, who hops into her lap and calls her “Mama Lydia.” STAAAHHHHP.

But back to the reason this show exists: so we can watch Housewives behaving ridiculously.

“I’m about understates sophistication, elegance,” Pettifleur says, as she descends the hotel stairs dressed like this:

Down at the bar, Pettifleur and Gamble descend into an insane argument I can barely keep track of. Pettifleur tells Gamble she doesn’t feel supported by her. She confronts Gamble—for the zillionth time—about Gamble calling her “Nouveau Riche Barbie.” What was Gamble implying by that? That she, Gamble, comes from old money? Uh, can this dumb fight end?

No, it can’t. Pettifleur says she has a Barbie name for Gamble: Carnival Clown Barbie. Doesn’t Gamble want to know what the nickname means? Nope, she doesn’t care. That makes Pettifleur angrier. Pettifleur asks Gamble how she affords to buy all her fancy dresses—is it an allowance? Gamble, offended, fires the question back at Pettifleur.

“It’s called a wage, and I earn it,” Pettifleur says. BAH.

Whew! What did I even just watch? And how many brain cells died in the process?

Eventually the other Housewives arrive in the bar, and Pettifleur confesses that she asked Gamble if she had an allowance.

Eventually Gamble returns to the bar. Things are a little tense, but Chyka steers the conversation to happier news: Gamble’s upcoming hen’s night. And guess what? It’s Bond girl-themed! That’s why Pettifleur’s dressed in that… interesting way. Everyone laughs and clinks their glasses, as if nothing bad ever happened.

The next day, the women head to a fancy spa called The Farm. They all get massages that seem really relaxing, and all of a sudden I’m pretty sure I know what all of the Housewives’ O-faces look like.

Over at the foot massage station, things get deep between Lydia and Gamble. Gamble asks Lydia what she’s doing next weekend, and Lydia explains she’s visiting her dead baby son’s grave, because it’s the 25th anniversary of his death.

Tinkly music that I’d expect to hear in The Fault in Our Stars starts playing. Gamble looks like she’s about to cry, and tells Lydia her heart is broken at the news. She also apologizes for seeming to have laughed at the story at Chyka’s dinner—she just hadn’t heard what Lydia was saying.

“If it’s any consolation, you’re not alone in this sort of loss,” Gamble says. Then she reveals that her grandmother and father both died, leaving her all the money Pettifleur had been asking about.

Lydia feels like she and Gamble have a sisterly bond.

Everyone’s feeling really relaxed at the spa, but to Pettifleur, it feels like the calm before the storm. Uh oh!

The women sit down to dinner, and it’s all fine at first: Gina invites everyone to a sneak preview of her shoe line. Nobody even knew she was working on a shoe line. Is this like that time she randomly launched a soap line at her cancer party?

Remember the calm before the storm? The storm officially begins when Pettifleur pulls out the manuscript of her questionably-original book, Switch the Bitch.

Gina starts by complimenting the first page, but it doesn’t last long. “You shouldn’t start a paragraph with ‘because,'” she says, pointing to a spot in the text. I love you Gina, but r u for real?! But Gina’s only just getting started; she proceeds to remind Pettifleur that her book will probably get flagged for plagiarism. What a fun convo!

Eventually, Pettifleur brings up her nickname for Gamble: Carnival Clown Barbie. After all, she never got to explain its meaning to Gamble. I’m expecting the name to mean something really vicious, but instead, it’s just supposed signify the way Gamble sometimes looks around with a wide-eyed expression on her face. Er, okay?

Everyone laughs, and the episode ends. Cool cool. 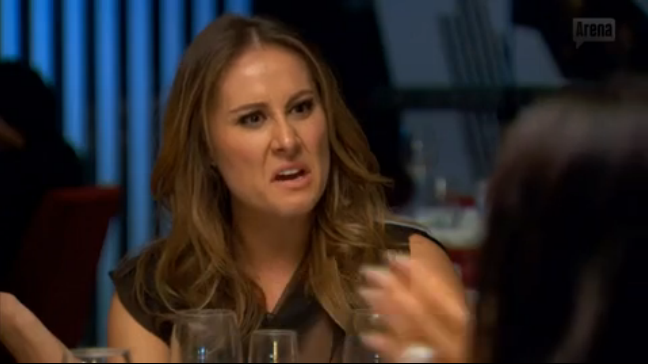