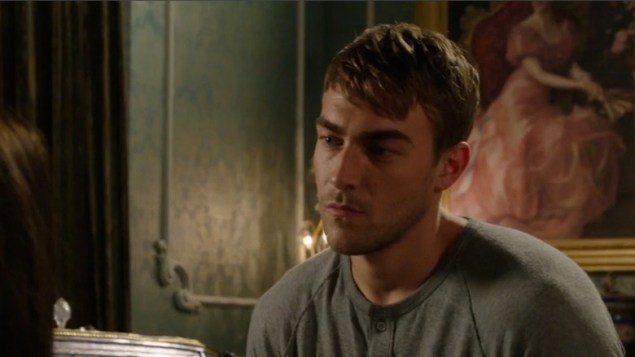 Pack your bags, fellow commoners! This week on The Royals, we’re heading to Monaco! And the gang’s all here: Len, Liam, Ophelia, Ashok, Gemma, and the two cousins who nobody missed while they were gone. But before we dive in to the land of Princess Grace, let’s take a quick trip to London and check in with the elder Royals, shall we?

King Simon has returned and Queen Helena could not care less. “You used to be excited to see me.” “You used to bring me flowers.” Ouch.

Simon sulks about the quiet castle and seems to not quite know what to do with himself. Enter Prudence, our little failed murderer. You may remember from last week that Cyrus has blackmailed her into spying on the King for him. She does and all we find out is that Simon sneaks away to wander around the city and people watch. YAWN.

Prudence returns to the castle and tells Cyrus that she will no longer be doing his dirty work. She calls his bluff. If he reports her for tresason, she can inform the world that he raped and blackmailed her multiple times. I have the feeling Prudence has the upper hand here.

Meanwhile, after confessing to never having a the Princess Eleanor sex tape and having that blow up in his face, Jasper requests a transfer out of her service. Is this the last we’ll see of the mysterious Vegas drifter? Have we said goodbye to that weird half-Batman British accent he attempts? Nope! He’s moving on up! To the East side! To a deluxe apartment in the sky! Well, not really. He’s actually been moved to Helena’s service and Ophelia’s dad wastes no time in warning Jasper about the queen. She’s been poking into his past and if she finds out who he truly is, he’ll be tried for treason. Ophelia’s dad tells Jasper that Helena is threatened by Eleanor’s youth and beauty as if that wasn’t a well known fact. Being the master manipulator that he is, Jasper uses this to his advantage and sleeps with Helena. It’s obvious that Eleanor will inevitably find out about this and I, for one, am dreading that day. The Spice Girls said “If you wanna be my lover, you gotta get with my friends”. Nowhere in that song is there a verse that addresses sleeping with one’s mother. While her relationship with Jasper was unhealthy, it did seem that she was growing to care for him in her own messed up way.  Our princess can never catch a break. #TeamEleanor

Speaking of our Princess, let’s head over to Monaco and see how the royals do a weekend getaway. Basically, what they do is rent a beautiful house, wear awesome clothes, drink a lot, gamble, and have sex. Pretty much no different than what they do every other day.

Ophelia and Liam are finally together and gosh darnit, if they aren’t just adorable. Liam is ever the gentleman and let’s Ophelia have her own bedroom so that they can take things slow. That lasts all of half a day and soon they’re kissing and taking tops off and living their truth!

The kids are joined by a handsome, older guy named Beck who we find out was a) Robert’s best friend and b) that taker of Len’s virginity. Every time he’s around, Eleanor turns into a 12 year old girl who is meeting her third favorite member of One Direction for the first time. She’s still a functioning human, but a giggly and nervous one at that. He has joined them at Liam’s request because he thinks it will make Len happy. First thing Beck does is hide Len’s bag of drugs and essentially forces her to spend the weekend sober. The two talk about Robert fondly and reminisce. Len’s sobriety provides a lot of heartfelt interactions and genuine feelings. Being around Beck makes her miss Robert even more but she realizes that it’s a good thing. Right when we as viewers are starting to feel like Len may have finally found someone good for her, the rug is ripped from under us and it’s revealed that Beck is married…it seems unhappily married…but married at that. Can’t we just let Eleanor be happy for once and win one?!

Gemma is in Monaco as well and wastes no time making Ophelia (and everyone else) uncomfortable. She plays poker with Ashok and ends up losing his brand new sports car in a bad hand. I always thought that Gemma was smart, but who the hell bets a $200,000 car on a pair of sixes?! Liam manages to win the car back from the sleazy frenchman with a round of darts. Ophelia asks Liam how he became so good at darts and we find out it’s because he wanted to impress Robert.

The absence of Robert weighed heavily in this episode and it only serves to fuel my theory that Robert is still alive. Let’s remember, we’ve never seen a picture of the deceased prince (casting hasn’t made up their minds?), he died in mysterious circumstances (of course he did), and what a way to shake up the season finale. My theory is that Simon is going to step down as King and right before Liam is crowned, Robert will make his return. Which, of course, means we’ll be getting another handsome Brit to stare at for 44 minutes. Swoon. 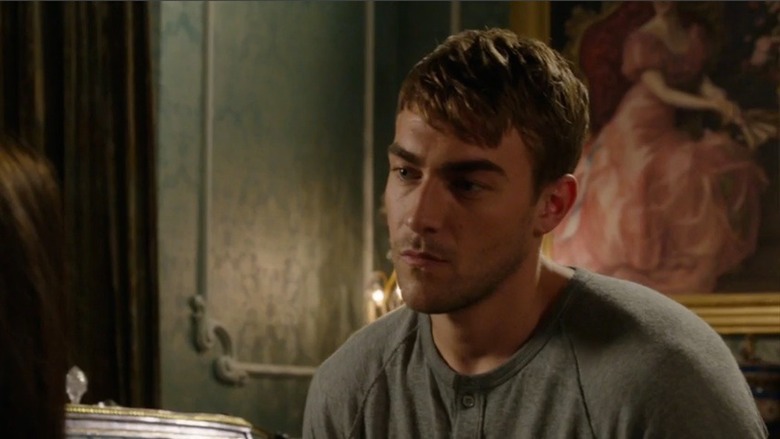