Well, guys, King Simon did it. He finally called for the referendum to abolish the monarchy. So what’s going to happen to our dearly, not so beloved by the public, royal family now? We’ll have to wait and see but let’s recap how we got to this moment, shall we?

First things first, let’s discuss DAME JOAN FREAKING COLLINS rolling up in this episode like it was nothing. What?! I have long admired Joan Collins since I played “Mrs. Potiphar” in a local, children’s production of Joseph and the Amazing Technicolor Dreamcoat. She played Mrs. Potiphar in the video version of the show that received a lot of airtime in my house. But, I digress. Collins played Alexandra, the Grand Duchess of Oxford a.k.a Queen Helena’s mother. She came to the palace to dote on her grandchildren, hate on her daughter, and throw ALL of the shade. A few of her choice quotes from the episode include:

“I see you’ve redecorated. I’d love to know whatever possessed you to choose Vegas as your theme.”

“She who fears the thorn shouold never grasp the rose.” (Also said by Anne Bronte, but whatevs)

“There are times when one should not know where her husband is…this is not one of them.”

“Of caviar, I approve. It’s a super food. But coke will rot your teeth.” (The drug, not the soft drink)

“A woman’s mind must be sharper than a man’s but her body should always be softer.” (Meghan Trainor will have a field day with this one)

Meeting the Grand Duchess gives us a chance to see where all of Queen Helena’s anger and maliciousness stems from. Helena spends the entire episode in a panic after King Simon tells her that he’s going to meet with the Prime Minister and it’s none of her beeswax why. She, of course, enlists the help of Cyrus which proves futile. Cyrus finds Simon standing in front of Robert’s tomb (I think? It’s a marble statue dedicated to him) and confronts him about the referendum. He says that the people of Britain depend on the monarchy for the “magic” and it’s up to Simon to “hold the line”. Simon will have none of that and it seems that our King has finally found his spine.

Adding to Queen Helena’s stress is the now fully bloomed relationship between Ophelia and Prince Liam.  Ophelia has caused a QUITE the stir among the paparazzi due to one of them catching her flashing her tatas in Monaco. The picture is blasted across every tabloid and it seems our little commoner is a commoner no longer. Liam is with her every step of the way and this is the first time in seven episodes that I’ve truly rooted for them as a couple. He even demands that Ophelia now receive a security detail due to their relationship being “official”. However, it seems a storm might be a’comin’ when we find out that Ophelia is up for a part in a dance troupe in New York City. She decides to keep this from Liam for the time being. I’m sure that will end well.

The family finally “finds” the missing King. Except he’s not in the palace; he’s on the television informing the world that he has officially called for the referendum. In a seriously epic speech, he talks about how he has failed as a husband, father, and leader. He laments about the fact that he never earned the crown and has been simply living a life of unnecessary luxury. “A life so advantaged and yet so uniquely constrained has turned my once proud and principled family into a pack of zoo animals”. YIKES. But, the thing is, he’s not wrong. The royal family seems to act more like The Kardashians (pre-Bruce Jenner interview) than actual royalty.

After his speech, Simon goes to find Prudence. We find that she has been fired and the King is devastated. He confronts Cyrus and Helena and does some truth telling. “You couldn’t help yourself. You had to run off the last person in this house who had integrity.” Helena snaps back and accuses the King of being in love with Prudence. “It wasn’t romantic, it wasn’t sexual. The person with true nobility has been banished, but you’re still here. You should both be ashamed of yourselves.”

At this point, I wanted to scream at the television “SIMON, STOP! Don’t you know you’re in a television show?! Once you start being true to yourself and a good person, something bad is going to happen!!!”

Len’s story, unfortunately, takes a bit of a backseat this episode. She ignores texts from the married Beck and instead looks to Jasper for comfort. She finds out he has been re-assigned and takes this pretty harshly. In a truly funny, karmic moment, Queen Helena looks for refuge from the Grand Duchess in Len’s room after the referendum announcement. “God, I hate my mum” Helena says, assuming she’s alone. Len laughs and it seems we have all come full circle. The Queen asks Len for drugs and Len turns her down. Who would have thought that Len would be the one without the drugs? She tells Helena that Simon called her a disappointment and the Queen echoes his sentiments. She echoes his sentiments because her daughter DID NOT GIVE HER DRUGS. If you listen closely, you can hear hundreds of psychiatrists clutching their hearts.

Len finds her father and begs him to give Liam a chance. She admits that she has been a less than perfect daughter but fights for her brother, pleading for Simon to see that Liam truly has been trying to change. Simon asks Liam to go on a walk just the two of them. Liam agrees and we thing “maybe there is hope after all???”

But, that hope is soon dashed among the rocks. Liam goes to comfort Ophelia after a paparazzi took a low blow and insulted Ophelia’s mother. Liam realizes he’s late to meet Simon and rushes out of Ophelia’s room but he’s too late. Simon has decided to take the walk himself.

And in the final few shots of the show we see: Liam waiting alone in the tunnels, Simon walking the streets of London alone, and Ophelia looking out of her window at a sneaky Cyrus sneaking around.

And then, in a truly sad moment, we see our King at the gates of the palace. He’s faltering and it appears that he’s been stabbed. He collapses and we’re left not knowing if he’s alive or dead.

Nothing gold can stay, my friends. Let’s all light a candle for our dear, King Simon and hope he pulls through. But then again, that wouldn’t make for very good television now, would it? 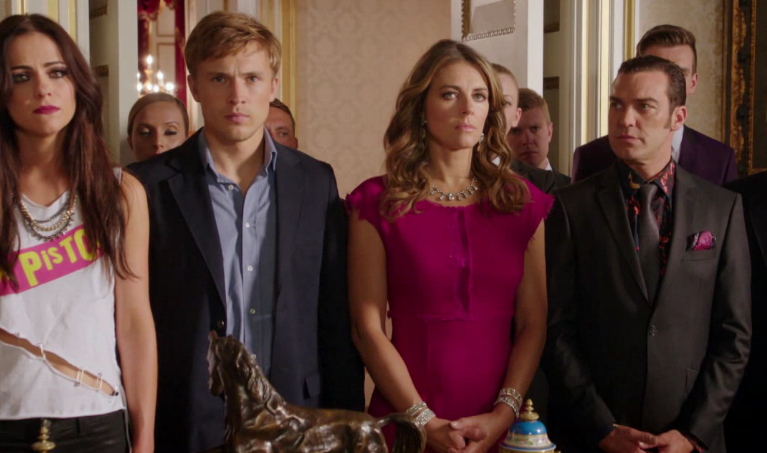