On the 8th floor of the Whitney’s new home in the Meatpacking District—past the horde of tux-clad first-tier donors, up the elevators designed by the late Richard Artschwager equipped with mini martini bars, down the steel-slashed grand hallway sprung forth from the mind of Renzo Piano, and out to the entrance of the top floor balcony with big Manhattan-wide vistas—stood Adam Weinberg, the museum’s director, contemplating his new domain. The rain had left New York just as the billionaires on the Whitney board were tying their bow ties, and though a thick slab of grey still went across the sky, those who spent fortunes on this building wanted to see the view they had bought. Mr. Weinberg was there to show it to them.

“We’ve been working on this for so long, and for a while, it felt like we were doing it all for ourselves,” the director told me as he was greeting those who came to pay their respects. “It’s so welcome to have the public come in because it’s not complete until the public can interact with the work.”

Though it’s hard to call Monday’s crowd “the public,” yes, the time has come. After decades of planning, years of construction, and months of goodbye galas on the Upper East Side, we’re finally feting the shock of glass and i-beams that is the new Whitney Museum of American Art. There are parties each night this week, a bombastic string of functions intent on seizing the city in Whitney mania—and the show, “America is Hard to See,” is good enough to inspire feelings of mania, indeed. And while shindigs are still to come, Monday night’s black tie bash might prove to be the most glittering.

Charlie Rose, martini in hand, bent down to chat with Chuck Close in front of Tom Wesselman’s Still Life Number 36, while Jasper Johns, still sprightly at 84, loomed over the proceedings, sauntering through a heart-stopping seventh-floor room of Pollack, de Kooning, di Suvero, Rothko and Newman (though a Lee Krasner gets the most wall space—sorry, boys). Bill Cunningham darted around taking pictures of visitors oohing and ahhing over a room that included a John Cage score work in the corner, Jeff Koons’ illuminated vacuum cleaners in the center, and a Nam June Paik tower of televisions to the side. The names that adorn buildings and museum corridors—Tisch, Lauder, Speyer, Biddle—floated through the massive exhibition, bumping into the artists they quite possibly collect: Lawrence Weiner, John Currin, Wade Guyton, Brice Marden, Cindy Sherman, Glenn Ligon.

Michael Bloomberg easily worked the room like the billionaire’s billionaire he is, almost as if he never left office. (The current mayor did not make an appearance, in person or in conversation.) At one point, Mr. Bloomberg was approached by an ecstatic Mark di Suvero, and they shared a bro-hug. The media titan and the artist—who was clad in a puffy red sailor vest embroidered with the name “Marco”—seem like an unlikely duo until one recalls that the artist’s wife, Kate Levin, was the head of the department of cultural affairs under Mayor Mike, and now works for Bloomberg Associates.

“Did you see what almost happened to my sculpture in Dallas?” di Suvero asked Mr. Bloomberg.

The former mayor gave back a puzzled look.

“They almost destroyed it!” he said.

When the artist came over, I assured him, despite that close encounter with a crane, I had dinner underneath that very work in Dallas, and all was fine. Then I asked about his incredible sculptures in “America is Hard to See,” each crowned by the masterworks of post-war titans.

“No, no, no, they’re just normal works,” he said, getting by a gap in the crowds using two crutches. “It’s all sculptures.”

And then behind Mr. di Suvero was his pal, Mr. Bloomberg.

“I think it’s just spectacular,” Michael Bloomberg told me as I huddled with him by the Marsden Hartley works that open the show. “Renzo Piano is just an absolute brilliant genius, and he’s a super nice guy. He’s built something that will take this part of the city forward and be a catalyst for enormous growth. There’s the High Line, the new pier that Barry Diller is funding, Hudson River Park—that Diana, in all fairness, is chairman of the board of—and this pulls it all together.”

Woman holding triangles began to ring their dinner bells, but the penguins kept milling around, some more carelessly than others.

“Someone knocked over the boot,” said one man, quite possibly referring to the Gober installation—which, if true, is a tad horrifying. (Maybe someone should, um, check on that?) Then I was walking toward the five-story stairwell and saw what I had already double-tapped on the Instagram accounts of those more insider than I: the giant, wowing Felix Gonzalez-Torres installation that bisects the space between the spiraling stairs, an unabashed spectacle, the exhibition’s one concession to the phenomenon of the museum selfie.

And so the first of millions of Gonzalez-Torres selfies at the Whitney was taken.

As the masses finally made their way to the dinner, a photographer stopped artist couple Carroll Dunham and Laurie Simmons, and after snapping a few shots, asked for their names, which they offered.

The parents of the television personality, perhaps exasperated by this sort of thing, both nodded, and sighed.

The dinner finally began, and the Whitney Museum of American Art did not skimp on the American Food: everyone got meat and potatoes, steaks with big bowls of the creamy starch served family style on the side. The billionaires chowed down as a Jenny Holzer work—”IF YOU’RE CONSIDERED USELESS NO ONE WILL FEED YOU ANYMORE”—flashed on an LED screen in the back. “DANCE ON DOWN TO THE GOVERNMENT AND TELL THEM YOU’RE EAGER TO RULE BECAUSE YOU KNOW WHAT’S GOOD FOR YOU,” read another. The messages went unmentioned.

Then requisite speeches from co-chairmen Bob Hurst and Brooke Neidich gave way to a performance by Rufus Wainwright, who had interpreted “black tie” as “outrageous purple ascot and unbuttoned shirt.”

“That last time I played this, it was for the president, so you’re in good company,” he said, and then broke into “New York State of Mind.” Perhaps it was the champagne, or the drunken excitement of seeing money on a museum well spent, the thrill of being in this ship-like structure by the , filled with masterpieces as its cargo, an ark of culture moored by no coast riding off toward the future—whatever it was, the Billy Joel song sounded good. The lyrics that usually ooze cheese—”I’m taking a Greyhound, on the Hudson River Line, I’m in a New York state of mind”—well, they were downright poignant.

Then Mr. Weinberg came on stage, raised a glass for a toast, and the room did the same.

“Here’s to the next hundred years,” he said. 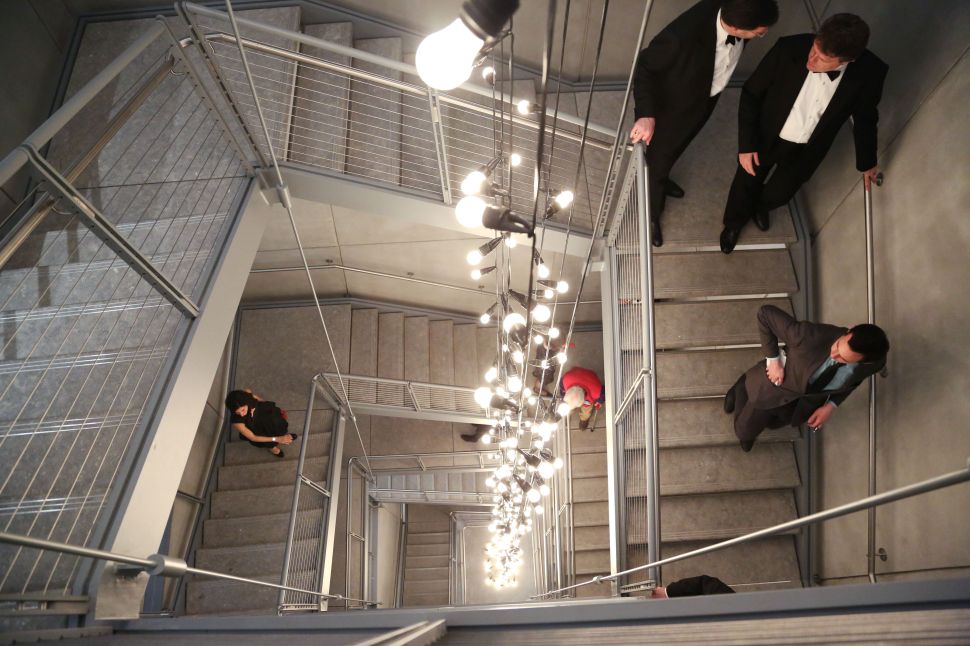