The world sees spots, and millions upon millions of dots, when it comes to Japanese artist Yayoi Kusama. The 86-year-old “Polka Dot Princess” has just been crowned the world’s most popular artist in 2014, as ranked by museum attendance. She hands-down beat out all of her male and female competition for the title, according to the annual global museum attendance survey by the Art Newspaper.

But it turns out going dotty over Yayoi Kusama is nothing new. While she dropped out of the art world for much of her life—retiring voluntarily to a sanitarium—the Japanese dynamo has been the beating heart of the avant-garde art scene since her arrival in New York in 1957. During the 1960s, Ms. Kusama exhibited alongside and apparently influenced peers such as Andy Warhol, Claes Oldenburg, and George Segal, rising to fame in the pop art sphere thanks to her trademark polka dots, performance art and use of psychedelic colors. While living in New York, Ms. Kusama performed and organized ticketed polka dot orgies, naked anti-tax happenings, anti-war protests and other staged productions, further expanding her star power.

Born in Matsumoto, Japan, she started using her visual language of painting with polka dots and nets as motifs at the early age of 10 to deal with mental health problems. Since 1977, Ms. Kusama has lived by choice in a mental hospital in Tokyo due to nervous disorders and hallucinations stemming from childhood. She continues to paint and create to this day in her artist studio across the street from the psychiatric hospital.

Over the past several years, Ms. Kusama’s work has been “rediscovered,” recently being widely featured in solo and group presentations, as well as in several large retrospectives that have effectively brought her back into the spotlight. She is now widely recognized rightfully as a highly influential female sculptor and painter.

Now in her eighth decade, Ms. Kusama still dons her bright-colored wigs, polka dot dresses, eccentric fashions and even a polka-dotted wheel chair for her rare appearances with the press. She drew over 2 million visitors to her most recent massive retrospective tour, Yayoi Kusama: Obsession Infinita. The tour, which features over 100 works created between 1950 and 2013, started at Malba – Fundacacion Constantini in 2013 and has since traveled throughout South and Central America over the past two years, officially due to end on June 7, 2015.

She is also currently the subject of another touring international museum exhibition, titled Yayoi Kusama: A Dream I Dreamed. This solo exhibition consists of over 100 recent works and has traveled throughout Asia, from the Daegu Art Museum in Korea and onwards to its final stop in 2015 at the National Gallery of Modern Art in New Delhi .

If you feel inspired to join in the Yayoi moment, you can visit her art currently held in museum collections worldwide, including nearby at the MoMa, the Whitney, and at the Hirshhorn Museum and Sculpture Garden in Washington, D.C., amongst other international locations. Ms. Kusama will also return to the David Zwirner gallery for her second solo exhibition at the location, titled Give Me Love, from May 9 to June 13, 2015. Her inaugural exhibition in early 2013, titled I Who Have Arrived In Heaven, filled all three spaces at the West 19th Street location in New York. 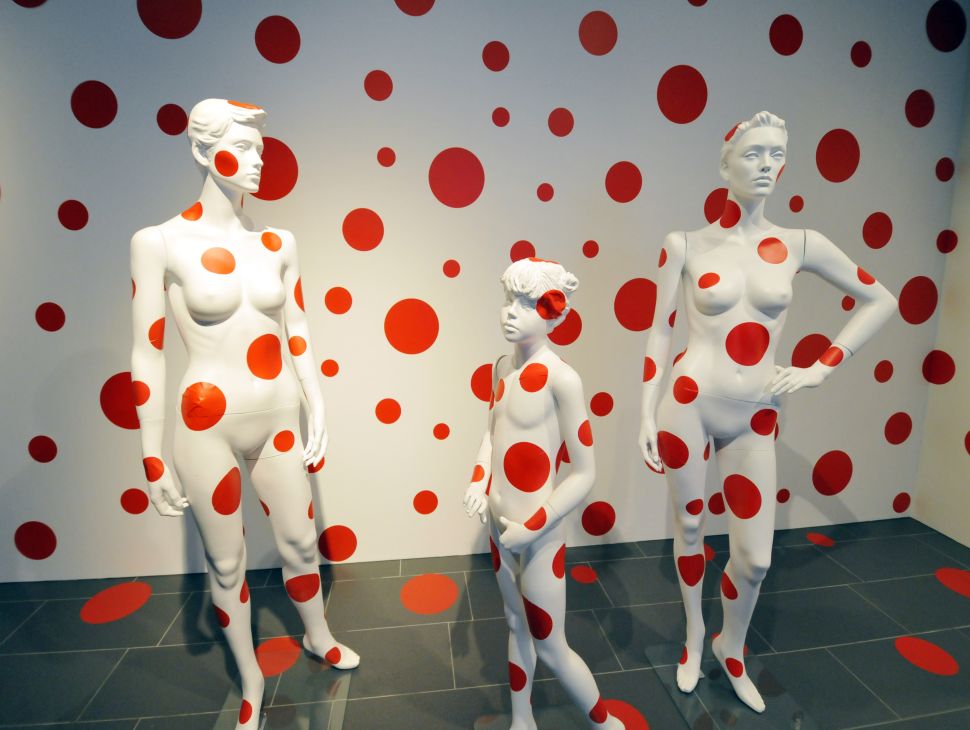