A CEO calls her staff into the conference room on the eve of the launch of a major new initiative. They file in and take their seats around the table. She calls the meeting to attention and begins, “I have bad news. The project has failed spectacularly. What went wrong?”

The team is perplexed: What?! But we haven’t even launched yet…!

I know it seems strange and maybe even counterproductive to demand that employees think negatively instead of optimistically, but in business circles today, everyone from startups to Fortune 500 companies and the Harvard Business Review are doing this exact exercise. In a direct response to optimistic, feel-good thinking, these leaders are encouraging their employees to think negatively.

The technique that the CEO above was using was designed by psychologist Gary Klein. It’s called a premortem. In a premortem, a project manager must envision what could go wrong—what will go wrong—in advance, before starting. Why? Far too many ambitious undertakings fail for preventable reasons. Far too many people don’t have a backup plan because they refuse to consider that something might not go exactly as they wish.

In fact, I think more companies need a Chief Dissent Officer, someone to shoot down the bad ideas that our blind spots and naive optimism too often obscure. They can catch us when we are puffed up with visions of our own greatness and preordained success. Remember Netflix’s aborted attempt to split into two separate companies? Or when Google Wave was marketed as “the next Gmail,” only to be shut down in a little over a year? If only these great companies had stopped to envision the possible travails that awaited them, they might have been able to prevent them.

No one has ever understood this better than former heavyweight champion Mike Tyson, who, reflecting on the collapse of his fortune and fame, told a reporter, “If you’re not humble, life will visit humbleness upon you.”

The practice goes back much further than just psychology though. It dates back many thousands of years, in fact—to the great Stoic philosophers like Marcus Aurelius, Epictetus and Seneca. And they had an even better name for it: premeditatio malorum (premeditation of evils).

A writer like Seneca would begin by reviewing or rehearsing his plans, say, to take a trip. And then, in his head (or in writing), he would go over the things that could go wrong or prevent it from happening—a storm could arise, the captain could fall ill, the ship could be attacked by pirates.

“Nothing happens to the wise man against his expectation,” he wrote to a friend. “. . . nor do all things turn out for him as he wished but as he reckoned—and above all he reckoned that something could block his plans.”

By doing this exercise, Seneca was always prepared for disruption and always working that disruption into his plans. He was fitted for defeat or victory. And let’s be honest, a pleasant surprise is a lot better than an unpleasant one.

In a case where nothing could be done, the Stoics would use it as an important practice to do something the rest of us too often fail to do—manage expectations. Because sometimes the only answer to “What if?” is, “It will suck but we’ll be okay.”

We often learn the hard way that our world is ruled by external factors. We don’t always get what is rightfully ours, even if we’ve earned it. Not everything is as clean and straightforward as the games they play in business school. Psychologically, we must prepare ourselves for this to happen.

If it comes as a constant surprise each and every time something unexpected occurs, you’re not only going to be miserable whenever you attempt something big, you’re going to have a much harder time accepting it and moving on to attempts two, three, and four. The only guarantee, ever, is that things could go wrong. The only thing we can use to mitigate this is anticipation, because the only variable we control completely is ourselves.

The world might call you a pessimist. Who cares? It’s far better to seem like a downer than to be blindsided or caught off guard.

If we have prepared ourselves for the obstacles that are inevitably on their way, we can rest assured that it’s other people who have not. In other words, this bad luck is actually a chance for us to make up some time. We become like runners who train on hills or at altitude so they can beat racers who expected the course would be flat.

We are prepared for failure and ready for success. 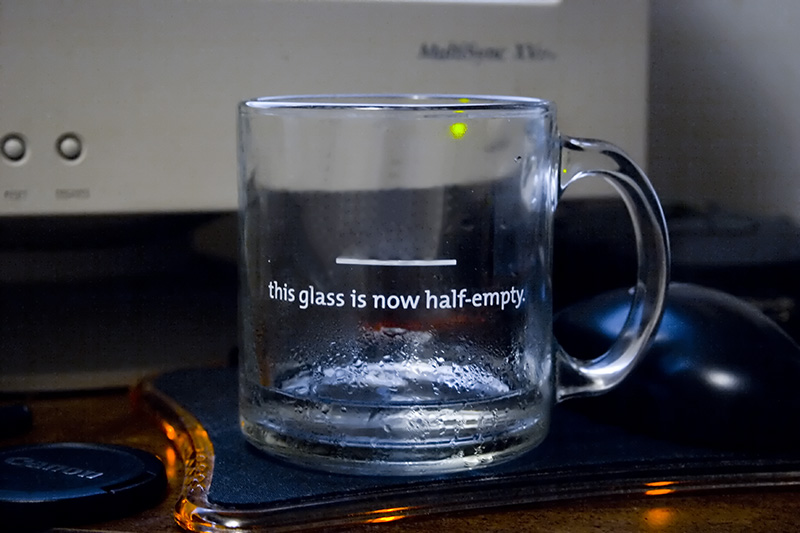