You’ve Got Another Thing Coming

I can no longer remember the first heavy metal song I ever listened to, but I assume it was something by Metallica. I can tell you the first album I fell in love with: Brave New World by Iron Maiden.

For metal purists, this is a strange choice. The album came out in May 2000, not exactly the heyday of the genre. In fact, this was actually the perfect introduction for me. The album was just new enough that it sounded modern and fresh, but being that it was the band’s first reunited collaboration in nearly a decade, it had just enough of their classic sound that I was hooked. It’s a damn good album too—one of the singles even got a Grammy nod.

From there, it was down the rabbit hole. The exposure had been accidental—all because in those days illegal downloads from sites like Audiogalaxy were constantly mislabeled. But it also meant that I had access to the vast back catalogs of artists that I’d have never heard on the radio.

I went through all of it. Priest. Megadeth. Dio. Sabbath. Ozzy. Blind Guardian. Dream Theater.

It’s probably every parent’s worst nightmare, especially parents of the generation mine came from. This was dumb people music to them. It was ridiculous, ugly, and only a few short steps from tattoos, drugs, long hair and dropping out of school (only a few of those things actually happened to me!)

But really, heavy metal put me on the path I am on today—in every positive sense.

A few years ago a study found that kids with the highest IQs are disproportionately attracted to heavy metal. The reason is that the themes of alienation, frustration, and even pain, match the experience of a smart young person struggling to fit in and make sense of the world.

So yes, most parents might think that metal songs are about drugs, violence, suicide, the devil and whatever other ridiculous stereotypes scared people project onto it. More directly, the assumption is that they somehow advocate these things to impressionable young people. Of course, the opposite is true. In fact, the music is often about coping with the complicated and dark feelings that come along with a serious intellect at an early age.

The result is often surprising. I remember that one of the first open minded and thoughtful things I heard about gay people was from a Rush song called Nobody’s Hero (the sexuality of Rob Halford, the lead singer of Judas Priest, was an open secret in heavy metal for a long time). Metallica has songs that deal with suicide, drugs and addiction in smart and moving ways and their song One is based on the anti-war novel, Johnny Get Your Gun. Metallica is not the only band to address these issues as Megadeth, Slayer, Black Sabbath and Judas Priest to name a few have tackled the subject. Who else were we going to process it with?

From Iron Maiden, I fell in love with history in a new way. In fact, several studies have examined the multitude of historical themes explored by the band, ranging from Pre-History to current events, from Genghis Khan to the battle of Passchendaele. The first time I heard audio of a Winston Churchill speech wasn’t in school, it was in the intro of Iron Maiden’s 1984 music video for “Aces High”—which I downloaded off another file sharing network. It’s not as if MTV was playing it. They have a song inspired by Lord Tennyson’s The Charge of the Light Brigade and another based on an epic poem from Coleridge.

I’m not saying it was a straight line from here to studying ancient philosophy and history, but it did start the process.

It’s not just what the music is about. There is an artistry that far too many people fail to see. There’s a line in Metallica’s For Whom The Bell Tolls (based on Hemingway’s book, by the way) that goes:

“Crack of dawn, all is gone
except the will to be”

Even now, every time I hear it, I think: that is so good. It’s poetry in a different context, sure, and damn good writing. When what we had to read and study in school bored me out of my mind, it was music that stimulated me–that inspired me to think about how words could be used, what was worth studying and just what the human experience really was.

I remember reading a lot about Metallica and specifically its guitarist Kirk Hammett. After the band had kicked out its original guitarist (Dave Mustaine who would go on to form Megadeth), they invited Kirk to join the group. You know what the first thing he did was? Even though he was an accomplished player, he started taking lessons from a guy named Joe Satriani (who went on to be one of the greatest guitar players who ever lived). That is, even though he landed his dream job, he continued to learn and stay a student. I remember thinking how different that was than the notion that geniuses are just naturally that way. No, it actually takes practice and work to be good at something—even a thing that many don’t respect as real “art.”

I’m not saying this is what made me a writer, but it helped. Something you notice really quickly about the genre is that it’s more than just music. Heavy metal album covers are some of the best in the history of music. Because the bands understood that they weren’t just recording songs, but creating brands. Metallica’s cover for Master of Puppets is spectacular. Iron Maiden’s Seventh Son of a Seventh Son, Somewhere in Time, Powerslave and The Number of the Beast are all ridiculously cool (mostly because of Eddie their mascot). Megadeth’s Peace Sells… but Who’s Buying? is spectacular. Judas Priest’s British Steel is badass too.

Heavy metal has always been the clearest proof of Kevin Kelly’s “1,000 True Fans” concept. These are acts that rarely got on the radio or on television. How did they survive? How did they keep going? How do they currently sell out stadiums—literally stadiums—when most people assumed they’ve broken up? Because they know who their fans are and exist exclusively for them. They were also smart enough businessmen to figure out earlier than the rest of the industry that the money was never in record sales. One of the common dismissals of bands like Anthrax or Maiden or Megadeth is that they sold more t-shirts than albums. Yeah, that’s brilliant. Because nobody takes a cut of your merchandise sales.

Like I said, the first Iron Maiden songs I heard were pirated, but since then I’ve probably spent close to a thousand dollars on a various related products the band sold from tickets to box sets to DVDs. This is what made Metallica’s attack on Napster so ridiculous. They’d gotten popular as a band because of bootleg tapes. Their own balance sheet should have made it clear where the profit centers of the industry were. In any case, to see these bands continue to thrive when the economics of music have supposedly collapsed is a testament to the power of a loyal fan base and a universe of products.

Of course, I’m not saying that this is what got me into marketing or even that it was responsible for my time in the music industry, but it did give me a lot of good ideas.

The most important lesson I learned from heavy metal came from the band (and the singer) that caught me first. From Bruce Dickinson, I learned that you really can be good at more than one thing. And that stereotypes are total bullshit. In Dickinson, we have a man who wasn’t content to just be the lead singer in a band that sold 85 million records. He also wanted to have an acclaimed career as a solo artist, a professional airline pilot, a bestselling novelist, Olympic-level fencer and then in his spare time, have a show on BBC radio. The guy flies the band and its equipment to Iron Maiden’s sold-out shows in a custom 757. Fuuuck…was all I could think when I was 15. It’s what I think still.

If there’s one model that I’ve used to justify my peripatetic career, it’s been Bruce. Why shouldn’t I try new things? Why wouldn’t it be possible to get really good at this thing? If he can do all he’s done, I can do a fraction of it.

I know to my parents my love of heavy metal probably seemed like the beginning of a bad dream. Where will this go, they must have thought? Is he going to end up like those losers?

Of course, the entire time it was making me smarter, introducing me to new ideas, teaching me about the business of art, and inspiring me to pick a unique career.

Plus it was fun.

I don’t listen to great music as much anymore. Honestly, my taste has atrophied into whatever will help me tune out distractions while I work. But every once in a while, a Maiden track will come on and it takes me right back. I love it.

Heavy metal changed my life. Up the Irons. 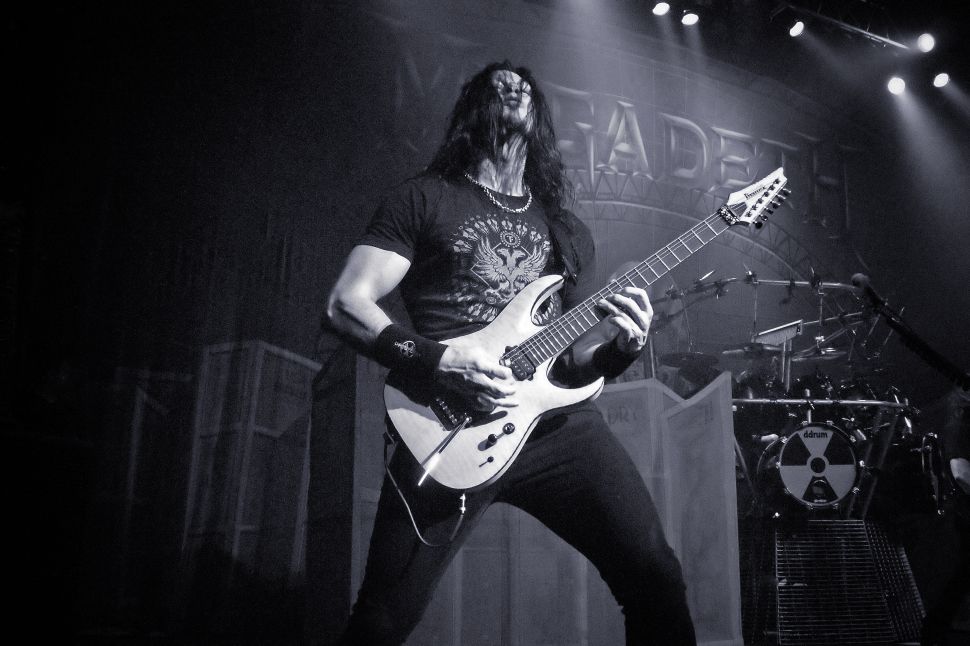