May 2016. In the Tallahassee home office of Jeb Bush. His key campaign advisors and legal counsel gather to mull a momentous decision. Bush has just won enough delegates to secure the Republican nomination; now he must think seriously about a running mate.

“Everything we’ve learned from the polls and the focus groups tells us the same thing as our instincts,” his top strategist says. “You want someone young; preferably in his or her 40s, who can project energy and excitement on the stump. That balances your … your…”

“No need for tact,” Bush shoots back. “When I give a fireside chat, the fire goes out.”

“Uh … right. And your veep should have federal experience to balance your eight years in the statehouse. A senator is a perfect fit.”

“Then there’s the ‘dynasty’ issue,” the strategist continues. “Son of a president, brother of a president … we obviously have to reach beyond the ‘old-rich-white-guy’ universe. I don’t think having a Latina wife or a gift for speaking Spanish is enough; a Hispanic running mate would be hugely helpful.”

The strategist pauses. “Well, kind of.”

“You know, we haven’t legalized weed in this state. In case you’ve forgotten, Rubio’s from Florida.  We can’t run together. It’s right there in the Constitution.”

“Well, not exactly,” replies his legal counsel. “What it says in the 12th Amendment is that the electors can’t vote for both a president and vice president ‘from the same state as themselves.’ So only the Florida electors would have to choose between you and Rubio; all the others could vote for you both.”

“This all goes back to the Revolution,” he goes on.

“No, governor. Earlier. The states were very suspicious of each other; small states were scared the big ones would dominate them; that’s why the only part of the Constitution that can’t be amended is the one that says every state gets two senators.”

“Fine; you win the C-SPAN 3 version of Jeopardy,” says Bush. “Do you seriously suggest we sacrifice 29 electoral votes for my running mate?”

“No,” the strategist says. “If your brother had chosen someone from Texas back in 2000, those lost 32 electoral votes would have thrown the vice presidential contest into the Senate.”

“You know,” Bush says after a moment’s pause, “in fact, W. did choose a fellow Texan—sort of. Cheney moved there in ’95 to run Halliburton. When George picked him up as his running mate, he just changed his residence to Wyoming. If you really think Marco’s the guy, why couldn’t …”

“He could if it was just a Constitutional question,” the legal counsel says. “As far as a federal office is concerned, as long as you’re living in a state by Election Day, that’s the state you’re from. That’s how Bobby Kennedy and Hillary got to be from New York; that’s how Scott Brown went from Massachusetts to New Hampshire.”

The political strategist shook his head.

“Look, New York is New York. Everybody’s from someplace else. And as far as Cheney goes, he’d spent almost his whole life in Wyoming: Raised there, went to school there, served in Congress from there … if Rubio moved, where would he go to? What would he say? He fell in love with Ohio’s climate? Might even hurt us right here in Florida, if people saw him as a deserter.”

“The whole notion is real out of date,” Bush says. “My dad wasn’t from Texas; I wasn’t from Florida; Obama wasn’t from Illinois; Hillary wasn’t from New York. And who picks running mates for ‘geographic balance’ any more? My dad didn’t pick Dan Quayle because he was from Indiana (God help us); Al Gore was Clinton’s next-door neighbor; did Cheney or Biden’s pick have anything to do with the electoral votes of Wyoming or Delaware?”

“Well,” he continues, “it just isn’t worth the risk. I mean, imagine if the VP choice had gone to the Senate after the 2000 election. It was a 50-50 Senate and you know who had the tie-breaking vote on January 3? Al Gore. If he was ticked off enough about what happened in Florida, he might have given my brother vice president … Joe Lieberman.” 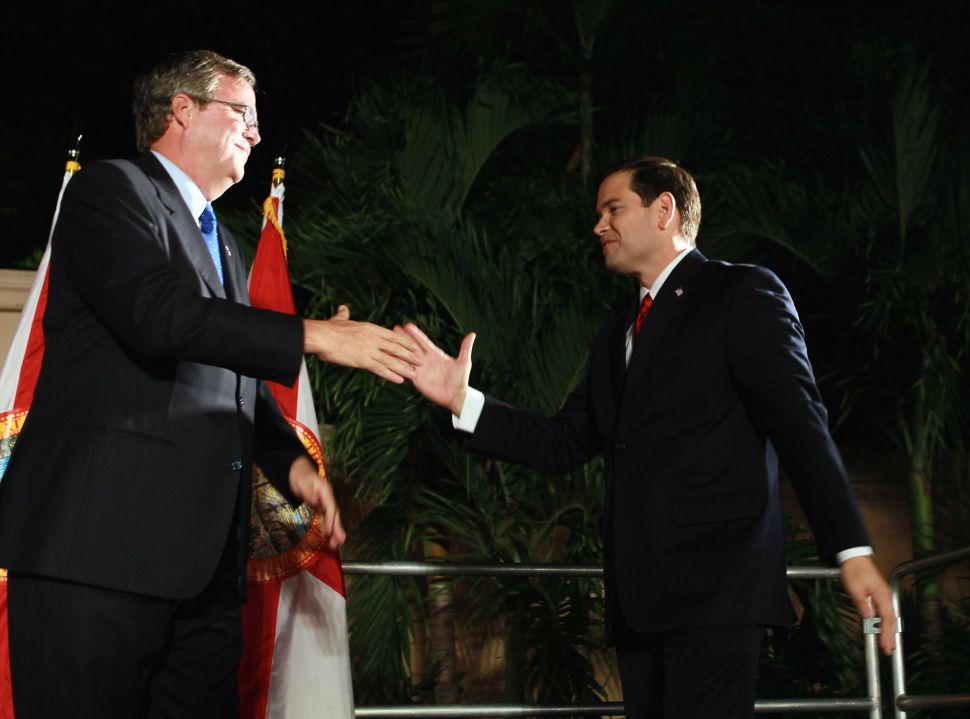