Edward Snowden is suddenly a figure in the New York art world.

A 100-pound bust of the hero/traitor (depending on who you ask) was installed in Fort Greene Park Monday night by artists who know their history: The park is also home to the Prison Ship Martyrs Monument, dedicated to Brooklyn colonists who died during the Revolutionary War fighting the same systems Mr. Snowden rebelled against.

City officials removed the statue within hours, but another group of artistic rebels called the Illuminators made a holographic recreation and projected it in the night sky for about 20 minutes early Tuesday morning.

The two guerrilla exhibitions flew in the face of city law, which mandates strict review of outdoor art by both community boards and a citywide commission.

While the Snowden screw-up made news because of its subject, the neighboring borough of Queens is dealing with a smaller art problem whose solution, if approved, could provide a template for all five boroughs.

When Ohad Meromi won a sculpture competition in Long Island City, Queens, he proposed erecting a large reclining human figure painted bright pink. Some residents told the community board they were bothered by the sculpture’s color and size. while others said the selection of Mr. Meromi’s piece was not transparent enough.

Cultural Affairs currently appoints a selection panel of city officials and art enthusiasts for each project, with the borough president and City Council looped into the discussion as well. There is little public input.

While this process has not caused many problems, the few projects that have been challenged stand as cautionary tales which prove for Mr. Van Bramer the need for a new process.

One firestorm erupted after a 1991 art installation in the South Bronx. Sculptor John Ahearn created three bronze figures who were supposed to represent local residents, but those same residents said the use of bronze created a racist, negative connotation. The art was quickly removed.

The most infamous public art in city history, Tilted Arc, was commissioned in 1981. The 12-foot-high, 112-foot-long steel wall, which was erected in Foley Square, was roundly criticized as too austere and threatening for a workspace. but its removal in 1989 was also problematic because the committee which decided on it was made up of city officials who openly criticized the work.

Ever since Tilted Arc, the city has endorsed more subtle, peaceful public art installations like those at Battery Park City– but the votes on these exhibits have not been open to the public.

Mr. Van Bramer, however, is aiming to find out what the people really want, so if his bill passes, every outside art exhibition, whether understated or overblown, will get more discussion and theoretically lead to less controversy. 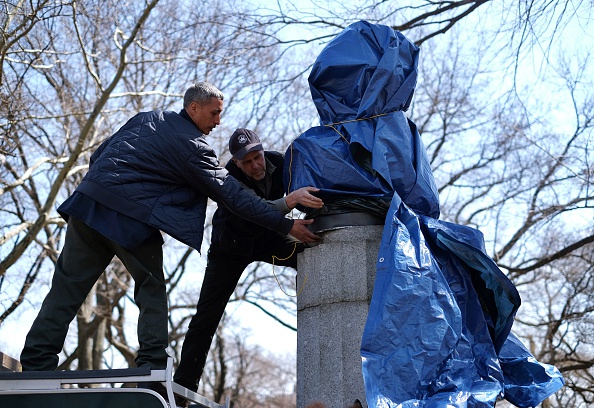