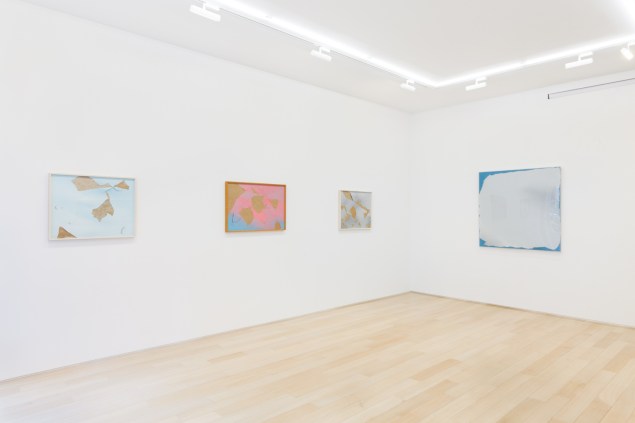 Los Angeles in the early ’60s was a blank canvas for a new generation of artists. It was a city almost completely devoid of an art scene; unencumbered by the artistic history that haunted Paris and New York.

But for Joe Goode, who had followed his boyhood friend Edward Ruscha from Oklahoma City to California, it was the right place to be at the right time.

At the tender age of 25 and only one year out of art school, both Messrs. Goode and Ruscha were included in curator and Pop Art guru Walter Hopps’ groundbreaking 1962 Pasadena Museum exhibition entitled “New Painting of Common Objects.” Hopps, along with artist Ed Kienholz, was the mastermind behind L.A.’s Ferus Gallery, the original breeding ground for Pop Art and the gallery most famous for giving Andy Warhol his first solo exhibition.

Mr. Goode was quickly singled out for his “milk bottle” paintings: painterly monochromes with a silhouette, or a painted 3-D version, of a glass milk bottle that punctuated an otherwise abstract canvas. Mr. Goode’s iconic pieces of Americana, like Warhol’s soup cans and Mr. Ruscha’s words from pop culture, were an instant hit with an American art audience hungry for homegrown content.

But Mr. Goode, who was armed with a precocious talent and an inquisitive thirst for painting, was never truly a Pop artist—at least not in the traditional sense. He was a painter (and sculptor) of memory. It’s as if he needed to dissect and look inside the things in his life that were important (milk bottles, staircases, clouds) in order to figure out the recipe that made these objects memorable.

In his current exhibition at Van Doren Waxter (At 23 East 73rd Street, up through May 1st) wistfully titled “There’s Always Tomorrow,” Mr. Goode rehangs a grouping of paintings from his “Torn Cloud” and “Vandalism” series’ made between the years 1967 and 1976.

Each grouping of 10 mostly easel-sized paintings (which feel almost like religious relics encased in shallow glass vitrines) sticks to the same format: realistic paintings of sky that have been defaced with cuts, rips and tears. In the hands of a lesser painter, a move like this could easily be brushed off as gimmicky, but Mr. Goode’s relentlessly delicate application of oil paint and surprising compositional ingenuity gives these works a humming, transcendental magic.

In the earliest works from this series, Mr. Goode slashes a variety of holes into his pristine skyscapes, leaving curled and frayed edges to expose a range of gray monochrome canvases beneath. His later works offer a similar effect but instead employ canvas board, which reveals areas of utilitarian brown paper pulp after the surface painting is ripped away.

Mr. Goode’s gashes act as stand-ins for clouds, which both complete and destroy his celestial spheres. It is absorbing to take in the variance of blues and grays within these works, yet the images also have an iconic feel, revealing skies and clouds to be much more than just a reflection on nature. Mr. Goode’s loaded symbols manage to evoke everything from Irving Berlin classics to the benign names of paint store color chips.

Mr. Goode’s talent lies in the way he collects the slippery meanings that we’ve attached to a thing while also making that object look strange and new. Because of this, Mr. Goode is more of a Pop artist in the original sense of the word: popular. Not popular in the way Thomas Kinkade, Painter of Light is popular, but in reference to the way that he locates popular objects in his art. It was a position that was hard to peg in relation to the Brillo Boxes of Warhol and Wham! cartoons of Roy Lichtenstein.

Fortunately, young standout artists as diverse and Sara Greenberger Rafferty and Aaron Bobrow are starting to find fruitful psychological avenues within the popular object, making Mr. Goode’s oeuvre all the more necessary to revisit. With our linear concept of art history starting to bend, it’s time to recognize Mr. Goode as the innovator that he is—always was. 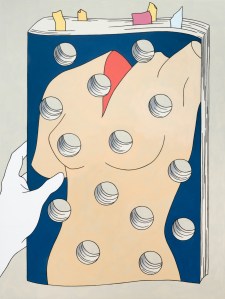 PAINTING, LIKE JAZZ, COMEDY OR ANY OTHER  amusement with a traceable history, is a language. Painters get to pick and choose from a long history of lines, marks, images,

shapes and colors in order to craft their ideal personal vision. The immense bank of visual information we have access to these days can be overwhelming, but sometimes painters manage to hit the right recipe of notes at the right time, sending a small ripple across the ocean of their medium.

Caitlin Keogh does just this in her debut one-woman show at Mary Boone uptown (up through this Saturday, April 25 at 745 Fifth Avenue) with nine larger-than-life canvases. Ms. Keogh is smart enough to know that she can’t completely reinvent painting, but she picks her sources and influences wisely—Surrealism, illustration art, advertising images, Art Nouveau—and carefully blends them without ambiguity.

The 32-year-old Alaska-born Ms. Keogh is armed to the teeth with art degrees (Cooper Union, Bard, Ecole Nationale Supérieure des Beaux-Arts de Paris), and unlike many artists eager for success these days, she appears to have taken her time mastering her craft before trying to take over the world. 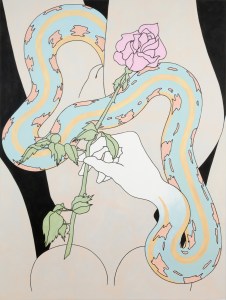 Each of her psychologically arresting canvases is themed with the guise of a creative-type (The Guest-Lecturer, The Illustrator, The Writer) and Ms. Keogh riffs off the generalities of these caricatures by blending a wide range of dated imagery culled from 1930s women’s magazines as source material. The outcome is both gorgeous and grotesque.

Ms. Keogh paints in a flat even hand traced by a thin outline. Most of her canvases feature an eerily outmoded and headless mannequin (or parts of said mannequin) intertwined with a variety of other objects such as a picture frame, a rope, a pair of scissors. Much like the Surrealist painter Giorgio de Chirico (or even the oft-maligned painter Mark Kostabi), Ms. Keogh’s adoption of a faceless—or in this case headless—figural device lets the viewer project themselves into her dramas.

The “faceless” figure is not new to painting nor is the use of technical illustration (Michael Craig-Martin’s boldly colored everyday objects share this aesthetic) but Ms. Keogh’s knack for psychosexually conjoining the objects of her fascination breathes new life into visual tropes.

Consider The Writer, 2014, a boldly planted flag in an art world that has grown listless on benign abstraction. Here our heroine mannequin is flipped upside down and cropped as a torso, its featureless breasts and genitalia lifelessly pointing upward. Hovering front and center before this cream-colored figure is a stark white hand holding an alluring rose, yet it’s the strongly diagonal body of a python connecting the wrist of the hand (via a cluster of muscular curves) to the entrance of the mannequin’s vagina that is the painting’s punch line.

Ms. Keogh affirms the power of imagery in a way that few painters do today, but it doesn’t mean she slouches on form and color; quite the opposite, in fact. Her chaste palette, which combines white, pink, gray and copper, only heightens the danger and fragility. 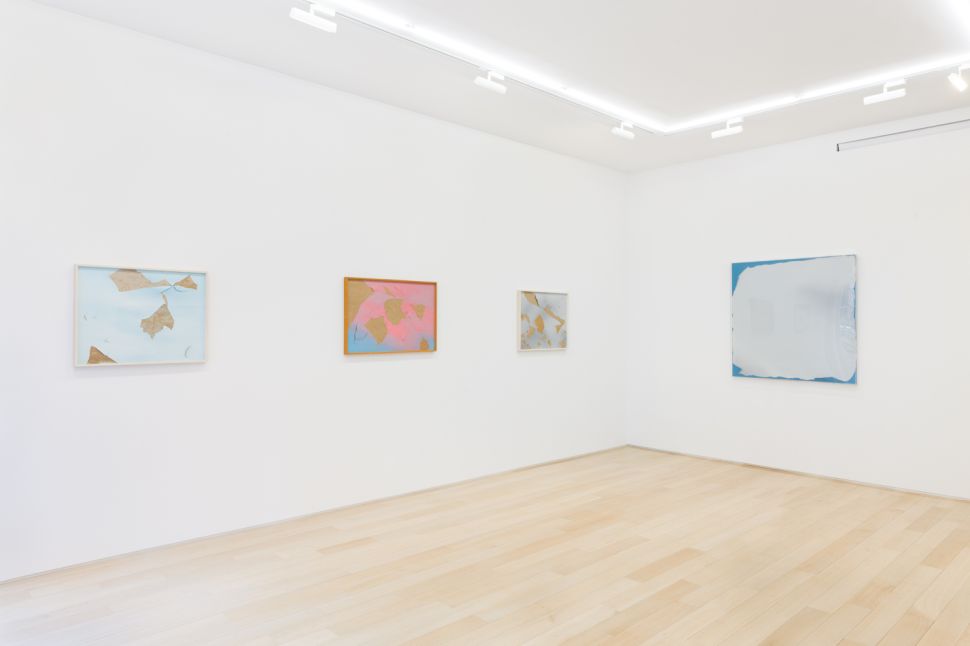